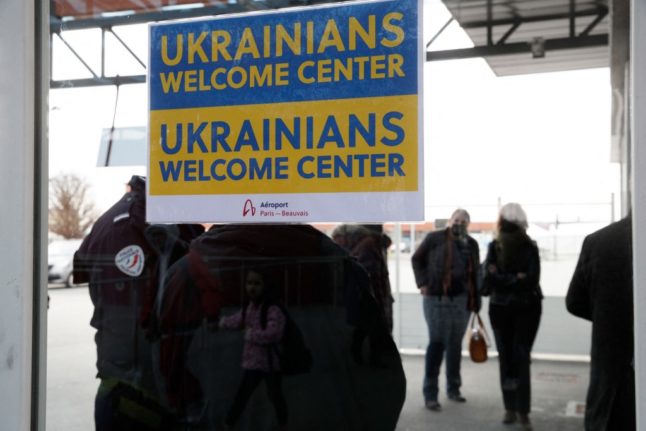 A sign at the Paris-Beauvais Airport indicates a welcome centre for Ukrainian nationals fleeing conflict. The French government has published guidance on what steps they should take once in France. (Photo by GEOFFROY VAN DER HASSELT / AFP)

The French Government has published guidelines for Ukrainians arriving in France, listing the rights, where they should seek help and what to do with their children. The instructions are also designed to give guidelines to the charities and public bodies helping the thousands of Ukrainians fleeing Russia’s invasion.

Close to 30,000 Ukrainians arrived in the country between February 24th when the invasion began and March 25th. Most are currently in the Alps, the east of the country or the greater Paris region of Île-de-France.

Ukrainians arriving in France are considered to be displaced, rather than refugees. The former refers to someone who may one day be able to return to their country of origin once the situation settles and so is given a temporary right to stay. The latter is given more permanent rights to stay.

We have broken down the key information below:

Where should Ukrainians register after arriving in France?

There are various ‘welcome points’ set up by the Government specifically to deal with Ukrainians.

In Nice, Ukrainians should go to Salle Malatesta, which is located in 64 Avenue Cyrille Besset 06100.

In Strasbourg, arrivals should go to the welcome centre in Place de la Bourse (Bourse Square).

Any Ukrainians elsewhere in France should register with their closest préfecture.

Local préfectures in France are the main authorities charged with registering those arriving. They will be able to provide help to access internet and complete the necessary administrative procedures. They will provide food, emergency housing and hygiene kits. They are also able to put Ukrainians in contact with social workers or organise medical/psychological treatment.

Who can benefit from protection in France?

Ukrainians who make it to France can receive an autorisation provisoire de séjour (APS) which means they will be allowed to stay legally for six months. This status can be renewed for up to three years.

To receive authorisation to stay, arrivals must fall into one of the following categories:

Ukrainian arrivals should provide as much documentary evidence as possible to back up their applications for protection. If a claim is approved, you will be referred to the Office français de l’immigration et de l’intégration (OFII).

What benefits will an APS provide?

Those who are granted an APS will be able to access assistance from the French state, in multiple forms.

APS holders will be able to access financial support in the form of the allocation pour demandeurs d’asile (ADA) – payments given to asylum seekers. The amount of money received depends on how large the family is.

Recipients will be given an ADA card which allows them to make payments by card, but not to withdraw money. The OFII is the organisation responsible for issuing these cards.

Upon arrival in France and having visited one of the welcome sites or préfectures, Ukrainians will be given emergency housing for one or two nights.

They will then, in theory be moved to more permanent housing for a matter of weeks or months. It could happen that the only available housing is in a different town to the one that the person first arrived in. In many situations, some degree of rent will be required.

Those who are disabled, either as a result of the war or otherwise, arrivals can request housing that is specifically adapted to their needs. The same goes for elderly people who face difficulty.

People with APS status are able to apply for various financial support from the French state such as the aide personnalisée au logement (APL) which can be used to help cover rental costs.

Ukrainians will be able to get free Covid vaccination in France.

Those who are yet to receive an APS can still get emergency medical care by going to their closes hospital with a passport or some other ID document.

Ukrainians with an APS have the right to work in France, but may be barred from working in certain roles.

Those looking for work can get help for the French public employment office (service public de l’emploi). The closest prefecture should be able to provide assistance reaching the office. Ukrainians can also search for jobs on the Pôle emploi website.

As an employee, APS holders have the legal right to the labour protections enjoyed by French citizens – such as a maximum 35-hour work week and a minimum hourly wage of €10.57.

Ukrainians with APS status are able to travel by TGV, TER and other interurban transport for free.

If you hold a Ukrainian driving license, you can use it to drive in France for as long as you have APS status.

You will need an official translation to show to law enforcement officers in case you are stopped.

Those who stay in France beyond three years under the APS and apply for a titre de séjour will eventually need to have a French license.

Ukrainians arriving in France are legally allowed to open a bank account.

If new arrivals from Ukraine have children under the age of three, they can enrol them in a crèche near their place of residence.

All children have the right to education in France – and public schools are free, including for the newly arrived Ukrainians. Boys and girls between 3-16 are required by law to go to school. Those between 16-18 who are not in school, training or employment can be assisted in returning to school or finding another opportunity. Thousands of Ukrainians have enrolled in French schools since February.

You can find useful contacts for enrolling in education here.

Students who were studying in Ukrainian higher educational establishments before the invasion are able to request enrollment in French higher education by contacting Campus France on the following address: [email protected]

This organisation will likely request students to fill out a form to gauge their abilities and interests before inscribing them for the next academic year.

Ukrainians can only bring cats and dogs to Ukraine if the animal has been identified and vaccinated against rabies three months prior to importation. Animals need to be health checked before arrival.

Those who brought animals to France without going through these steps must contact a vet from the Direction Départementale de la Protection des Populations as soon as possible.

The information booklet carries a special warning about sexual violence.

Those that want to report sexual or sexist violence can do so via a special platform. You can read about it, in Ukrainian, on page 19 of this document. You are not required to reveal your identity.

Note: This article is a summary of the key information provided by the French government with regards to the welcoming of Ukrainians fleeing the war. If you are in this situation and in any doubt at all, you should contact your local préfecture for more information.