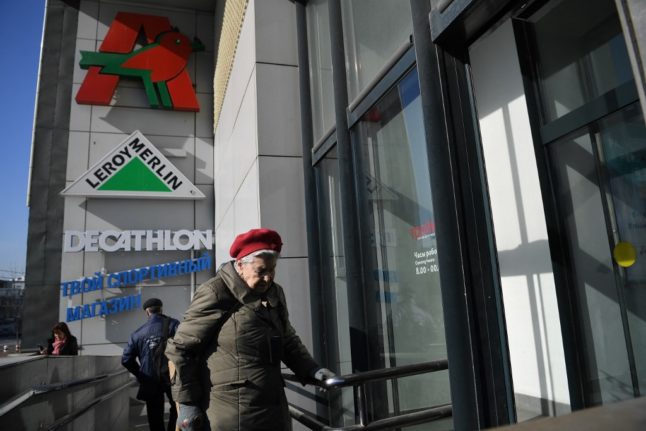 Hundreds of Western firms have mothballed their subsidiaries in Russia or announced full pullouts since Moscow invaded Ukraine on February 24th, but others have defied mounting campaigns to withdraw, including several large French investors.

Ukrainian President Volodymyr Zelensky singled out bluechip French brands Renault, Auchan and Leroy Merlin in a speech to the national parliament in Paris on March 23rd, saying they “must stop sponsoring the Russian war machine.”

On Sunday, Ukrainian Foreign Minister Dmytro Kuleba increased the pressure by calling for a global boycott of retail giant Auchan as well as DIY retailer Leroy Merlin and Decathlon, all of which are controlled by the media-shy Mulliez family from northeast France.

In a statement on Tuesday, Decathlon announced its decision to close its shops but presented the choice as one forced by supply chain problems, rather than a principled stand against Russian leader Vladimir Putin.

“In strict compliance with international sanctions, Decathlon notes that the supply conditions are no longer met to continue its activity in Russia. Decathlon has to suspend the operation of its stores,” the company said.

Car maker Renault, having restarted operations at its factories earlier this month, announced the shuttering of production lines last week and hinted that it might divest its majority stake in domestic car giant AvtoVAZ.

After decades of active encouragement from governments in Paris, around 500 French companies have operations in Russia, making them collectively the biggest foreign employers in the country with 160,000 staff members, according to the French economy ministry.

French bank Société Générale owns a controlling stake in leading Russian lender Rosbank, while energy giant TotalEnergies produces 30 percent of its gas in Russia and has investments worth billions of euros in Arctic projects and local group Novatek.

Decathlon is a relatively small player with just 60 shops in Russia and 2,500 employees, far less than Leroy Merlin and Auchan which make 18 percent and 10 percent of their global sales in the country respectively.

The war in Ukraine has presented Western companies with a dilemma about whether to continue working in Russia, where strict capital controls announced by the government prevent them from selling up and withdrawing their money.

Putin has also threatened to nationalise and expropriate foreign groups that decide to join the boycott.

Researchers at Yale University in the United States have kept a log of Western companies and their policies on Russia, dividing them into five categories from “Withdrawal” – meaning a clean break – to those that are “Digging In”.

Around 450 have announced their withdrawal, according to their website, but companies in the latter “Digging In” category include Auchan, Leroy Merlin and Société Générale along with others from Europe, Asia and the Middle East.

Philippe Zimmermann, the chief executive of Leroy Merlin’s holding company, told local media last week that the group had a “employer’s responsibility towards its 45,000 employees and their families who have contributed to the construction of Leroy Merlin Russia over 18 years.”

He also argued that leaving “would be to offer a gift of the company and its activities to the Russian regime, reinforcing the war effort.”

The French government has so far declined to call on national companies to leave Russia, only instructing them to avoid dealing with specific sanctioned individuals and sectors.

Some in France have also questioned the wisdom and impact of companies pulling out of Russia, which supporters argue is necessary in order to deprive the Kremlin of tax revenue and send a signal to Russian consumers.

In an editorial this week, Le Monde newspaper stressed the danger of foreign-owned companies being bought at knock-down prices by Russian oligarchs, while acknowledging a “growing pressure on those that have decided to remain”.

“In this area, like the issue of energy supplies, beware of simple solutions to eminently complicated problems,” the paper wrote.

French Communist party presidential candidate Fabien Roussel warned on Tuesday about the impact on ordinary people, saying “he did not want to radicalise Russians and reinforce their support for Putin”.

“How can they (companies) leave without creating in Russia among these people, these families, these workers a feeling of anger, hatred and bitterness towards France?” he told the Franceinfo broadcaster.