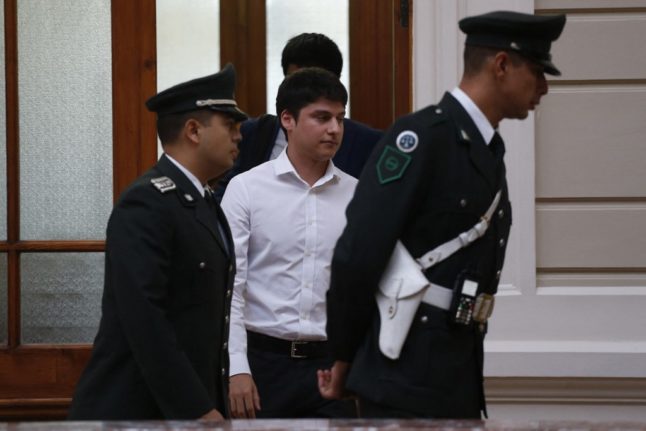 Nicolas Zepeda was extradited from Chile and will now stand trial in France. Photo by Pablo VERA / AFP

Narumi Kurosaki disappeared in 2016 in a high-profile case that has gripped three continents. Now the trial of Nicolas Zepeda, who denies killing Kurosaki, is going ahead after he was extradited from his country to France in 2020.

Japanese national Kurosaki, a brilliant scholarship student then aged 21, arrived in eastern French city Besancon in summer 2016 to learn the language. She disappeared on December 4th.

Her former boyfriend Zepeda, whom she had broken up with a year before, was the last person to see her alive.

Prosecutors allege that Zepeda was unable to deal with the breakup, coming to Besancon to kill Kurosaki in her student dorm room before dumping the body in the forests of the rugged Jura region.

But so far no trace has been found of Kurosaki’s body.

“Her parents know after five years that their daughter couldn’t have vanished or committed suicide… they have no doubt that Mr Zepeda killed her,” the family’s lawyer Sylvie Galley said.

Kurosaki’s mother and younger sister will travel from Tokyo to attend the trial.

Now aged 31, Zepeda has been in custody in Besancon since his extradition from Chile, which French judges had to fight hard to secure.

He denies any link to the disappearance of Kurosaki, whom he met at Japan’s Tsukuba university in 2014.

He has been held in solitary confinement because of the case’s high profile.

Zepeda’s lawyer Jacqueline Laffont said that her client was “almost relieved to finally be able to explain himself, to be heard, he’s coming in determined”.

The Chilean has admitted spending the night with Kurosaki in December, who he claims he ran into by chance while travelling through France.

Some of Kurosaki’s friends received strange messages in the following days from her social networking accounts, which police believe were sent by Zepeda.But several witnesses reported hearing “screams of terror” and thuds “as if someone was striking” — although none called the police at the time.

It was more than a week later, on December 13, that a university administrator reported her missing.

The suspect had already left for Chile after spending several days with a cousin in Spain.

No sign of blood or a struggle was found in Kurosaki’s student room, and all her belongings were still there apart from a suitcase and a blanket.

Zepeda turned himself in to Chilean police and said that Kurosaki had been alive when he left her after spending the night together.

He quickly became the prime suspect after he was found to have gone out of his way via a forest, and to have bought matches and a container of flammable liquid.

But prosecutor Etienne Manteaux said last year that there was “a huge amount of technical data” relating to the case, including phone records, the locations of Zepeda’s vehicle and his debit card records.

Prosecutors have also trailed “witness testimony from people close to him that disprove Mr Zepeda’s version of events” claiming a chance encounter that ended with the former couple in bed.

“It’s a tricky case, like any criminal case where there’s no body,” said Randall Schwerdorffer, a lawyer for the Japanese student’s new boyfriend at the time of her disappearance, who is a joint plaintiff in the case.