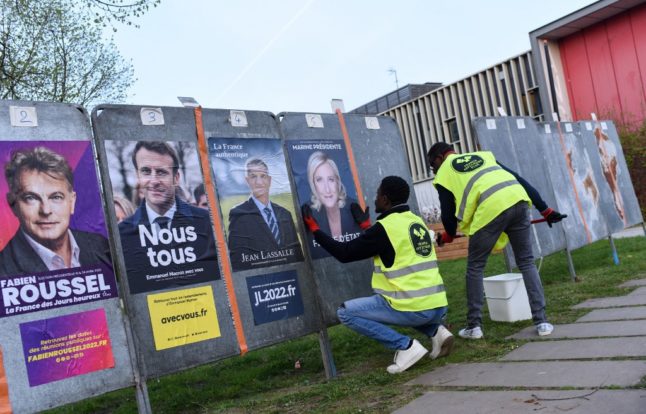 Election posts put up in the French town of Saint-Herblain, near Nantes. Photo by Sebastien SALOM-GOMIS / AFP

A total of 12 candidates managed to muster the 500 endorsements from elected French officials needed to enter the race. The top two in the first round will face off in a second-round run-off on April 24th.

AFP looks at all of them, from the frontrunner, President Emmanuel Macron, to an eccentric former shepherd from the Pyrenees mountains.

Last night’s daily tracking poll by IFOP for Paris Match – “le rolling” – shows Macron at 28.5%, 1.5 points down in a week but still 4 points up on his pre-Ukraine war average. MLP is on 20%, 2.5 points up in a week as she reclaims support which deserted to Zemmour last year 3/ pic.twitter.com/wdDJ1OPzsw

Marine Le Pen – The veteran far-right leader is making her third attempt for the presidency after reaching the second round in 2017, with her political future widely seen as on the line in this year’s polls.

Rather than holding flashy rallies, the 53-year-old has opted for low-key grassroots campaigning while seeking to cast herself as more mainstream, moderate and competent than her far-right rivals – and even her former self.

Eric Zemmour – The ex-journalist, TV pundit and best-selling author has a major national following thanks to his anti-Islam and anti-immigration views, which has enabled him to draw away supporters from Le Pen and the mainstream right.

As a political newcomer, the 63-year-old enjoyed a surge in the polls last October, but gaffes and his uncompromising style have seen him slip significantly behind Le Pen, according to surveys.

Nicolas Dupont-Aignan – The eurosceptic head of the “Rise Up France” party is a pugnacious mayor of a Paris suburb who bubbles up in French public life every five years at presidential election time.

He has promised to crack down on migration and give “a kick in the butt to the lazy, slackers and free riders”, but has been largely drowned out by Le Pen and Zemmour.

Valérie Pécresse – The head of the Greater Paris region surprised many by winning the primary for the conservative Republicans party, becoming its first female candidate in a presidential election.

CentreThe former budget minister has accused Macron of overspending and being soft on crime, but her campaign has struggled to gain traction and a disastrous first major rally in February dented her credibility.

Emmanuel Macron – In power since 2017 when he won the presidency in his first ever election, the 44-year-old pro-European was already the favourite at the turn of the year but the war in Ukraine has raised his chances further.

Seen as having drifted rightwards during his term, he is promising more tax cuts, benefits reform and a raise in the retirement age if he becomes the first French president to be re-elected in 20 years.

Anne Hidalgo – The mayor of Paris took on the task of trying to revive the fortunes of the floundering Socialist Party after it was trounced in the 2017 presidential and parliamentary elections.

The 62-year-old has rarely convinced and appeared to be looking for a way out at the end of last year, with polls suggesting she is on course to score under 5 percent.

Yannick Jadot – The former Greenpeace campaigner is hoping to transform the dazzling success the Greens enjoyed in local elections two years ago, saying the French are ready to embrace an environmental revolution.

He is pushing what he calls pragmatic policies to combat climate change instead of the more radical solutions sought by some in his party, but polls show him struggling to make double-digits.

Jean-Luc Mélenchon – A political veteran famous for his tirades against globalisation and the “elites,” the former Trotskyist is polling the strongest among the left-wing candidates.

A forceful speaker and debater, he is gaining momentum in the run-up to the election and his chances of making it into the second round run-off are being taken seriously.

Fabien Roussel – The charismatic leader of France’s Communist Party has seen his single-digit poll numbers mount in recent weeks, though his party remains a shadow of its former self in the post-war glory days.

Roussel has promised to increase taxes on companies and the highest earners as well as nationalise big banks and energy giants.

Philippe Poutou – An self-styled voice of the workers and scourge of professional politicians, the former Ford factory worker insulted fellow candidates during a TV debate in 2017 and refused to take part in a joint photo.

He is standing for the New Anti-Capitalist Party with a campaign promising to disarm the police and rebuild France’s public administration.

Nathalie Arthaud – A low-key and bookish former teacher who is standing for the Workers’ Struggle party in her third tilt at the presidency.

The Trotskyist is promising a huge hike in the minimum wage, a ban on job cuts and retirement at 60, but like all the other fringe candidates has made little impact on the campaign so far.

Jean Lassalle – The eccentric MP from the southwest Pyrennees mountain region is a former shepherd known for his strong regional accent and passionate defence of rural communities.

Viewed affectionately by many French people, he stands almost no chance in the presidential vote but will probably retain his seat in parliament if he stands in elections in June.

Follow all our latest coverage of the French 2022 presidential elections HERE.