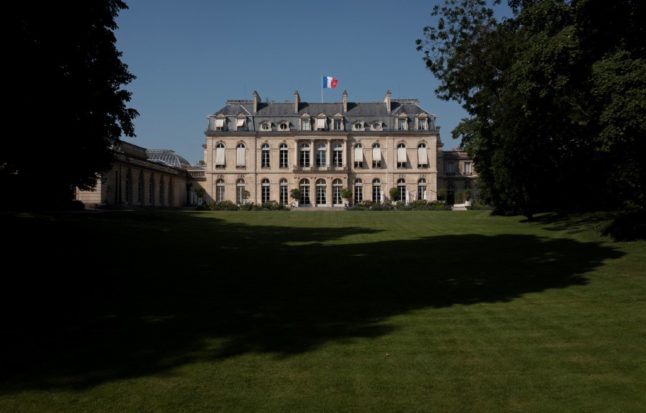 Presidential candidates are vying for the keys to the Elysée Palace. Most polls indicate Macron will end up staying there for another five years. (Photo by Eric Feferberg / AFP)

Candidates in France’s looming presidential election pushed at the weekend to make themselves heard over Russia’s invasion of Ukraine, with a re-run of 2017’s final showdown still the most likely outcome.

Buoyed in part by his shuttle diplomacy ahead of the conflict and toughness on Moscow since the tanks began to roll, liberal incumbent Emmanuel Macron is riding high in the polls with two weeks to go.

But as the president “is totally absorbed by the international crisis, it’s very difficult to be present and to campaign”, a source close to him told AFP on condition of anonymity.

Short of a major upset, his opponent in the runoff will be far-right National Rally leader Marine Le Pen — exactly the same setup as five years ago.

A trio of candidates — far-right rival Eric Zemmour, conservative Valerie Pecresse and left-winger Jean-Luc Melenchon — still hope they can break out from the pack and take on Macron in the second round.

“Everything could be decided in the two weeks to come, they could count double,” Adelaide Zulfikarpasic of the BVA Opinion polling group told AFP.

“Four out of ten voters who say they are certain to cast their ballot are still undecided” on a candidate, she said.

Brawl on the right

On Sunday, Zemmour hopes to rally up to 50,000 people a stone’s throw from the Eiffel Tower in Paris, bussing in supporters from other parts of France.

“This will be the event of the campaign, the biggest gathering,” the candidate told Sud Radio on Friday, insisting that “since the beginning, my meetings have touched off the greatest excitement.”

Yet Zemmour, a former columnist and TV commentator, has fallen below the 10 percent mark in some polls.

The National Rally leader strove to project serenity as members of her own camp — including her niece Marion Marechal — deserted her for tougher-talking Zemmour.

Instead Le Pen has pounded the pavements campaigning on French streets and market squares, and this week urged potential Zemmour voters to back her if she reaches the second round as forecast.

“No one owns their voters,” she told M6 television, adding that “I hope if I’m in the second round they’ll join us.”

With Zemmour and Le Pen slogging it out for the hard-right vote and Macron sounding pro-business and law and-order notes, conservative Valerie Pecresse has struggled to make herself heard.

Her woes deepened Thursday when she announced that a positive Covid-19 test would keep her from planned campaign stops in western France and the southeast.

Former banker Macron’s presidency has been dogged by left-wing resistance, including on law and order and economic issues, peaking with the “Yellow Vests” demonstrations in 2018 and 19.

But a political left divided among a slew of competing candidacies has yet to make a real mark on this year’s election.

“Don’t hide behind the differences between the leaders, you’re the ones who will make the decision, don’t shirk it,” Melenchon said at a Paris meeting a week before.

His hopes of making the second round could be thwarted by others still hoping for a miracle, including Paris Mayor Anne Hidalgo — polling around just two percent for the once-mighty Socialist Party — Communist candidate Fabien Roussel and Greens boss Yannick Jadot.

The woes of Pecresse and Hidalgo, candidates of the traditional bastions of left and right that dominated the political scene just a few years ago, illustrate the longer-term factors beyond the Ukraine conflict that have scrambled French politics.

“The systematic voter who voted out of duty, the voter who was loyal and faithful to political parties or to candidates… no longer exists,” said Anne Muxel, research director at Paris’ Centre for Political Research (Cevipof).

“Voters have a much more independent, individualised relationship to politics and to their electoral choices, they’re much more mobile, more volatile” — especially given that “the majority of French people don’t feel represented by political office-holders.”