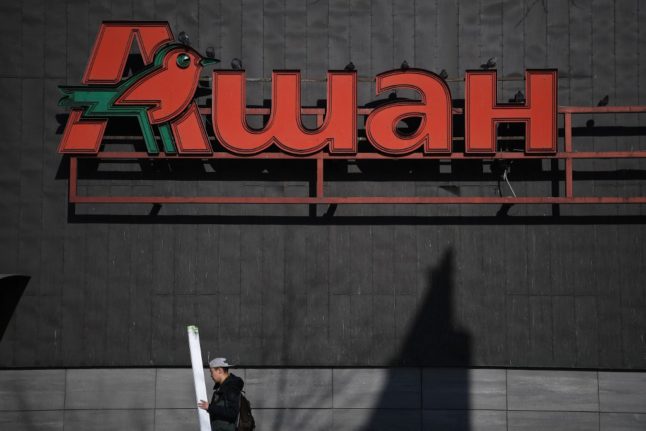 The logo of French retailer Auchan is pictured on a shopping centre in Moscow. The Ukrainian Foreign Minister called on Sunday for people to boycott the supermarket. (Photo by NATALIA KOLESNIKOVA / AFP)

“Apparently, job losses in Russia are more important than the loss of life in Ukraine. If Auchan ignores 139 Ukrainian children murdered during this month of Russian invasion, let us ignore Auchan and all their products,” he wrote on Twitter.

Kuleba called for a “boycott” of the retail group as well as French DIY retailer Leroy Merlin and sporting chain Decathlon, all of which operate under the Association Familiale Mulliez.

“Leaving would be imaginable from an economic point of view, but not from a human point of view,” he told French newspaper Le Journal du Dimanche.

According to its company website, Auchan has 41,000 employees and operates more than 300 stores in Russia.

He named in particular Auchan, Leroy Merlin and Renault. The car giant subsequently announced an immediate suspension of operations at its Moscow factory.