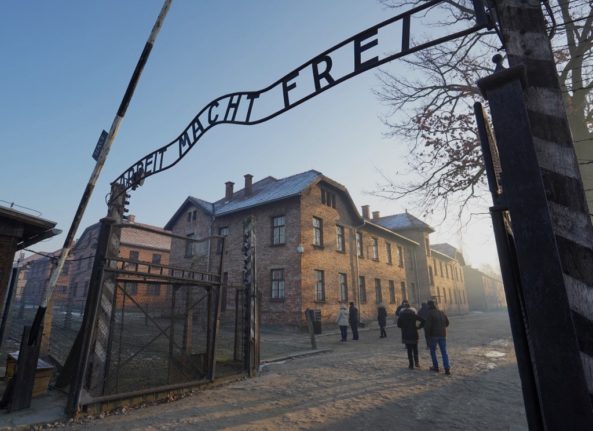 A legal complaint has been filed against presidential candidate Eric Zemmour for describing the deportation of homosexuals to concentration camps as "a myth". Photo: JANEK SKARZYNSKI / AFP

Jean-Luc Mélenchon surges in the polls

The most popular left-wing candidate in the race, Jean-Luc Mélenchon, is surging in the polls.

The 70-year-old is still currently 14 points behind the president but stands a chance of making it to the second round if he continues to build momentum.

“This tortoise has already overtaken quite a few hares,” Mélenchon told supporters this week.

The veteran politician has vowed to cut the retirement age to 60, boost the minimum wage to €1,400 and cap food and energy prices.

Macron joins the war on ‘wokeness’

In an interview on Wednesday, he outlined his vision for French overseas territories.

The president was asked about how France should remember its colonial past.

“We must look at history in the face – not delete it or rewrite it. I am against taking down statues, I hate this thing,” he said.

“I am against woke culture.”

More legal troubles for extreme-right candidate Eric Zemmour, as six equality organisations have filed a formal complaint against him for disputing a crime against humanity.

The legal complaint refers to a passage in Zemmour’s most recent book, in which he calls the deportation of homosexuals to Nazi concentration camps during World War II “a myth”.

Zemmour has already been convicted several times of inciting racial hatred, but since launching his presidential campaign he has also incurred a €70,000 fine for breach of copyright in his campaign video, while a Paris grocery store has also accused him of walking out with out paying (although he has since settled his bill at Bon Marché).

French energy giant Total also says it will be taking legal action, this time against green candidate Yannick Jadot, who described the company’s continued operations in Russia as “complicity in a war crime”.

Total has said it will continue to buy Russian gas but will stop purchasing Russian oil and petroleum products by the end of this year.

It’s not the only French company still operating in Russia, and Ukrainian leader Volodymyr Zelensky had tough words for the French supermarket chain Auchan, DIY retailer Leroy Merlin and car-maker Renault, saying: “French companies must stop financing the murder and rape of women and children. Everyone must remember that values are worth more than profits.”

Zelensky made his comments in a speech, via videolink in the French parliament,. He also praised the efforts of Emmanuel Macron to find a diplomatic solution to the crisis.

Seven people are in custody over what prosecutors describe as an attempted coup d’état against the president.

The plot, headed by a well-known conspiracy theorist, was to create a paramilitary organisation to overthrow the French state. Those arrested include a lawyer, an ex police officer, an army veteran and former members of the ‘yellow vest’ protest movement.

Macron warned not to get complacent

When you look at the polls, Macron is a clear favourite to win reelection.

His closest rival, Marine Le Pen, is 8 points behind him. At this point, it seems like fantasy that Valérie Pécresse or Éric Zemmour could be in with a shot.

But former Prime Minister Edouard Philippe, a Macron ally, has warned the French head of state not to get complacent.

“The predictive value of polls is nothing,” he said on Wednesday at a public meeting in Nice.

“If you hide behind polls to reassure yourself, you are hiding in a void, an image that does not correspond to tomorrow… It is those who vote that decide, not those who conduct, comment on or order polls.”

An unnamed government minister told Politico that Macron would attempt to “do more” on the campaign trail from next week.

Emmanuel Macron is taking part in a marathon diplomatic effort in Brussels to resolve the Ukraine crisis, attending NATO, G7 and EU summits today. On the home front, ministers Bruno Le Maire and Amélie de Montchalin are among those hitting the campaign trail on the president’s behalf.

Macron’s rivals also have a busy day ahead. Philippe Poutou is holding a public meeting in Marseille at 19h; Marine Le Pen is appearing on M6, TF1 and CNEWS later in the evening; and Valérie Pécresse, Fabien Roussel, Jean Lassalle and Nathalie Arthaud will take part in a programme called Élysée 2022 on France 2.