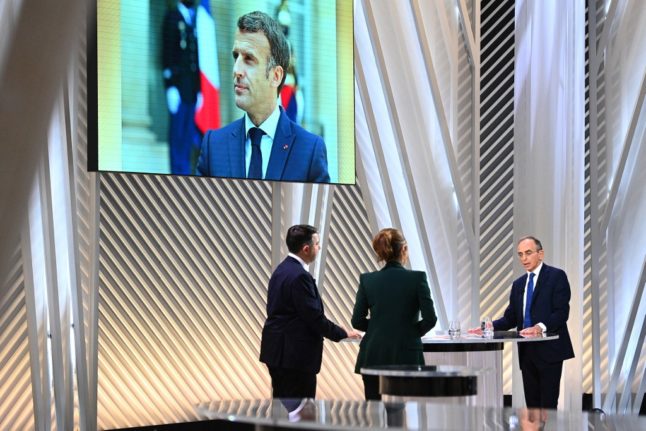 Who will face Emmanuel Macron in the second round of the French election? Photo by Christophe ARCHAMBAULT / AFP

Mea culpa. Last month I wrote off “the three Moscowteers”, the trio of Putin-fancying candidates in next month’s presidential election.

One of them, Eric Zemmour, has melted down in the polls. The others, Marine Le Pen and Jean-Luc Mélenchon, are going from strength to strength.

Why? How is it that Zemmour, of the new Far Right, is paying for his years of Putinidolatory while Le Pen (old Far Right) and Mélenchon (Hard Left) are escaping punishment for their years of Putin fellow-travelling?

With just over two weeks to the first round on April 10th, Le Pen is up to 19 percent in some polls and Mélenchon is in third place on 14-15 percent and rising. Macron remains far ahead on 27-29 percent, even though his post-Ukraine surge has peaked and fallen back a little.

There is no doubt, in my view, that Macron will be re-elected on April 24th but the identity of his second-round opponent is uncertain. I believe that it is most likely, once again, to be Le Pen but it could just be Mélenchon.

Does it matter? Yes, I think it does.

Macron v Le Pen would be a somewhat closer contest than Macron v Mélenchon. All the same, Macron would much rather face Le Pen than squash the eloquent old hard-left bruiser.

But why are two of the three “Moscowteers” rising in the polls?

Zemmour has fallen to 9 percent in one poll because his core message – “France is threatened by a migratory invasion from the South” – has been overwhelmed by reality. The real and immediate  threat to the French and European way of life comes from the East. And from a man whose ideology of aggressive, poisonous nostalgia is very close to that of Zemmour.

The electoral bases of Le Pen and Mélenchon are, it turns out, less concerned by the fate of Ukraine than Zemmour voters are.

I misread the extent of that difference last month, although I did say that Zemmour would suffer most.

Le Pen is rising in the polls partly because voters are returning to her from Zemmour; partly because her core electorate is poorer and preoccupied by its own problems. For understandable reasons, they are more concerned by the end-of-the-week than the end of the world.

To differentiate herself from Zemmour, Marine Le Pen has been campaigning on cost of living issues for weeks. This turns out to have been a smart bet. Putin’s invasion of Ukraine was an embarrassment to a candidate whose campaign was funded by a Russian loan in 2017. The spike in fuel and food prices is an electoral windfall.

Mélenchon also benefits from the domestic consequences of the Ukraine war and western sanctions. But that alone does not explain his rise. His electorate is heavily skewed towards the conspiratorial, anti-Nato left-wing and to second and third generation migrants , many of whom are resistant to the “western” narrative of Big Ugly Russia versus Gallant Little Ukraine.

Of all the leading candidates, Mélenchon remains de facto the most pro-Putin. He condemns the invasion but opposes western arms shipments to Ukraine, without which the Russian invasion would have triumphed.

He is also benefitting from Macron’s right-leaning programme for the next five years. Against the President’s plan for retirement at 65, Mélenchon is calling for a “social referendum” in favour of his irresponsible plan to reduce the standard retirement age from 62 to 60.

There is another factor, As the first round nears, left-wing votes are migrating to the best-placed left-winger. Similar tactical voting by the Left brought Mélenchon to 19.58 percent of the vote and fourth place in 2017. The entry ticket for the second round could be as low as 18 percent this year.

On the other hand, the residual score of the other left wing candidates is now very low and largely composed of hard-core anti-Mélenchonistes. To increase his present poll number of 13-15 percent, he needs to mine a “hidden vote” of  disaffected left-wingers.

My gut instinct is that Le Pen will take the second place and we will have a “déjà vu” run-off on April 24th – with the same outcome but substantially closer than Macron’s 66-34 percent victory in 2017.

The polls suggest that Macron would squash Mélenchon by a similar score this year because some Le Pen and Zemmour supporters would vote for him to block a President of the Hard Left. Such a vote, however big, would be a poisoned chalice for Macron.

The President’s entire strategy is based on running as the “candidate for the future” against a backward-looking Right or Far Right. That would preserve his position in the centre of a troubled and unpredictable French political landscape.

If he is painted as the de facto candidate of the Right, it will be harder for him to govern for what already looks like being a very tough five years.