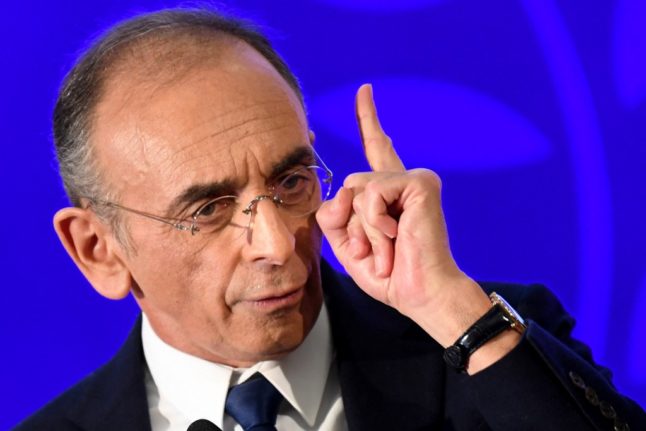 French far-right presidential candidate Eric Zemmour is being targeted with legal action by gay rights groups, who say he denied that homosexuals were rounded up and deported during the Nazi occupation of France in World War II.

Six gay rights associations told AFP on Wednesday that their criminal complaint for “denial of crimes against humanity” stemmed from Zemmour’s campaign manifesto, “France has not said its final word,” published in September.

In it, Zemmour agreed with another politician who claimed that deportations of homosexuals to concentration camps were a “legend”.

Zemmour “distorted history to support his homophobic positions,” the associations alleged in their complaint.

People close to the candidate retorted that “it is not Zemmour’s words that are cited in the book,” and called the legal move a smear attempt ahead of the first round of voting in the presidential election on April 10.

“Pro-LGBT” groups feared the candidate’s stance against gay “propaganda in our schools,” his team added.

Meanwhile Zemmour’s lawyer Olivier Pardo said he had not yet seen the legal complaint.

Seen by AFP, the complaint from the gay rights groups says that “deportation of homosexuals during World War II is an established historical fact” acknowledged by past French leaders including President Jacques Chirac and confirmed by recent scholarship.

“In France, at least 500 men accused of homosexuality were arrested, of whom at least 200 were deported during the German occupation,” they said.

Zemmour, 63, has for his part cited past declarations from Jewish associations that deported homosexuals were actually targeted as members of other persecuted categories, like Jews or members of the anti-Nazi resistance.

The candidate has in the past escaped conviction for another complaint of denying crimes against humanity, after he said that Marshal Petain, head of the Nazi vassal state based in Vichy during World War II, had “saved” French Jews.

An appeals court is set to render a new judgement in that case after the presidential vote.

Also Wednesday, Zemmour presented an outline of his budget plans if he were elected, claiming that he could find 20 billion euros ($22 billion) of savings by removing state aid to foreigners from outside the EU.

But the authority responsible for such payouts has said that the total for Europeans and non-Europeans combined was less than half the figure in 2019.

Zemmour’s spending priorities would include defence, internal security, the legal system and health — though his calculations did not include plans announced this week for a “remigration ministry” that he vowed would deport a million people within five years.

The idea of “remigration” is borrowed from white nationalist thinking, in line with Zemmour’s belief in the conspiracy theory of a “great replacement” of white Europeans by immigrants from Africa and the Middle East.