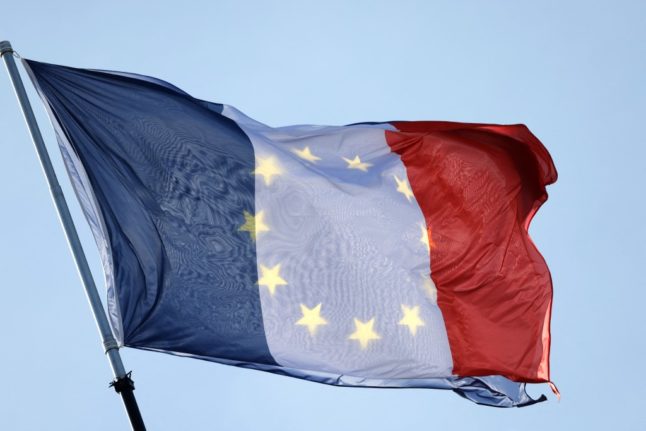 The French are deeply ambivalent about the EU, but there is no real risk of a Frexit anytime soon. (Photo by Ludovic MARIN / AFP)

Surveys suggest that the French have mixed feelings about the European Union.

“If we are pragmatic about it, of course we are obliged to be part of Europe, because we cannot act alone considering what is happening in Ukraine or with the pandemic,” said Chlo, a Paris-based pensioner.

“But the French people voted against the European constitution [the Lisbon Treaty] and it was imposed on us anyway. I think that really winds people up. They don’t see why politicians in Brussels or Strasbourg are more followed than our own MPs.”

The Elabe poll showed that men were more likely to have a negative perception of French membership of the EU than women, with the biggest sceptics aged between 35-49. People aged 18-24 had the most positive impression.

Those who supported French President Emmanuel Macron – an ardent Europhile – at the 2017 election were the most likely to say that membership of the bloc was advantageous (58 percent) – while only 9 percent of those who backed far-right leader Marine Le Pen shared the same view.

Negative feeling towards the bloc has decreased since 2016, when the UK voted to leave. An Odoxa poll from 2019 found that 66 percent of French people said that Brexit would make other Europeans less likely to want to leave the bloc. 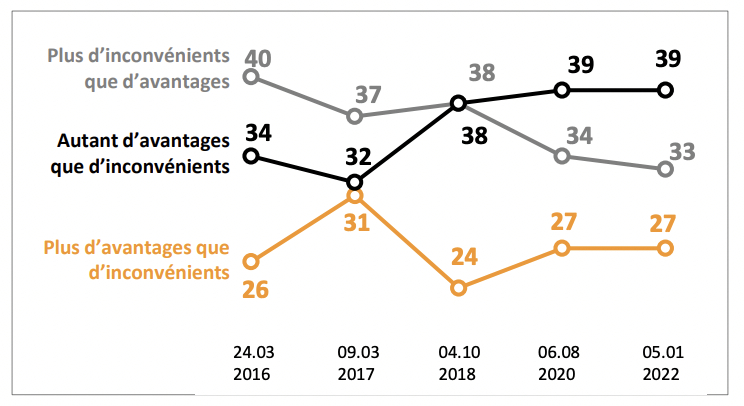 “Brexit really cost UK a lot economically,” said Sacha Sarfati, a financial auditor in Paris. “If France was to leave, it would cost us too.”

However the Elabe survey found that the majority of French people thought that the EU was not up to the task of tackling the economic fallout (55 percent) and health crisis (60 percent) caused by the pandemic.

The French are less enthusiastic about the EU than many other member states.

An IFOP survey published in December 2021 found that 29 percent of French people wanted a “more integrated” Europe, versus 43 percent of Germans and 50 percent of Italians. The French were also less likely to say that they were proud Europeans.

Where do the French presidential candidates stand on Europe?

In 2017, François Asselineau ran as a presidential candidate for a pro-Frexit party called the Union Populaire Républicaine, winning less than one percent of the vote. This time around, he failed to get enough parrainages to compete in the race.

None of the candidates in the 2022 French presidential election are openly calling for France to leave the EU.

Macron is avidly pro-European and since the start of the Ukraine war has been pushing for greater European co-operation on defence and energy policy.

“Wanting to weaken Europe is to leave France alone facing the threats of the world. Europe must be an extra protection for France,” reads his manifesto.

He has stressed the need for the EU to become more autonomous by investing more resources in defence, energy and technology.

Back in 2017, Marine Le Pen advocated leaving the European Union, which she described as “an illegitimate supranational structure” and abandoning the Euro currency. Since then, she has changed tack.

Le Pen is no longer in favour of Frexit, but would like to withdraw France from various EU treaties and get rid of the EU Commission, transforming it into a technical secretariat for the EU Council. She wants to transform the bloc into an association of allied member states capable of negotiating bilateral deals between themselves – something that would be very difficult to achieve within the Bloc.

“I am here to make the will of the French people respected,” she told France Inter in January. We will make [French] constitutional law superior to European law”.

Valérie Pécresse, candidate of the centre-right Les Républicains, has called for an “overhaul” of the Schengen agreement under which people can move freely within the EU. This too is unlikely to fly with officials in Brussels.

The campaign website of the main left-wing candidate in the election, Jean-Luc Mélenchon, gives a scathing account of the EU – particularly the free-market foundations of the bloc, which he claims are leading to social and ecological catastrophe.

He would like the EU to give member states greater sovereignty over their budget and to enshrine greater environmental protection and harmonisation between the countries.

The extreme-right candidate, Eric Zemmour, has a position on Europe that blends the most hostile elements of the Le Pen and Pécresse programmes. He would like to transform the EU into a collective of independent states, scrap EU rules on migration and prevent Turkey from joining the bloc. He would also like to ban the display of the EU flag in France without a French flag displayed next to it.