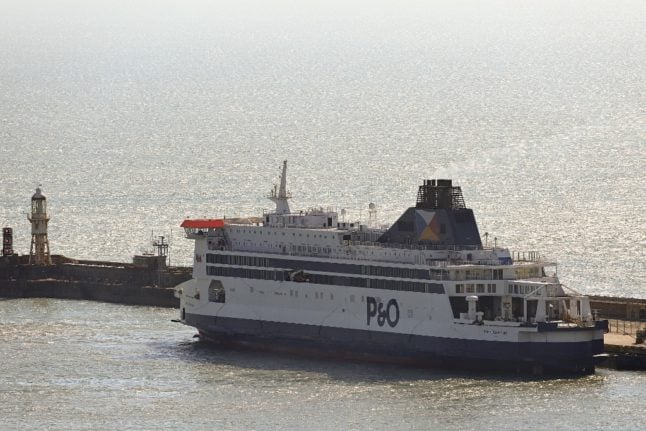 All sailings from P&O Ferries are suspended for the next few days after a shock announcement on Thursday.

The company’s 800 UK staff were called back to port and then told via a video announcement that they were out of a job, effective immediately. UK media has reported that the company is instead bringing in Colombian staff to crew the ships, in an apparent money-saving exercise.

Footage obtained by BBC South East shows the moment P&O Ferries staff were informed they had lost their jobs. pic.twitter.com/dvRnptHfC9

But as a cross-Channel company, P&O also has a significant contingent of French staff.

On Thursday French media reported staff representatives in France as saying they were not affected by the announcement.

P&O Ferries says that its business is “not viable in its current form” and that it made a £100million loss last year.

Like many travel firms, it has been badly hit by the pandemic. Even after lockdowns were lifted, travel restrictions imposed by both France and the UK have led to a steep drop in cross-Channel traffic.

The company says that in total it employed 3,000 people – including the 800 UK staff who lost their jobs.

The remaining staff are made up of office-based UK roles (the redundancies only affect seafaring staff) and staff in France, Ireland and the Netherlands.

The company said in a statement: “In making this tough decision [to axe the 800 UK jobs] we are securing the future viability of our business which employs an additional 2,200 people and supports billions in trade in and out of the UK. And we are ensuring that we can continue serving our customers in a way that they have demanded from us for many years.”

What about French staff?

The statement from P&O doesn’t mention any further job losses, but it’s clear that the company is in trouble, so it cannot be ruled out.

However, French workers enjoy greater protection than their British colleagues thanks to the Code du Travail (labour code).

The Code du Travail is an enormous doorstep of a document that covers everything from eating lunch at your desk to having sex with a stranger on a business trip – and how bosses can get rid of their workers.

If the redundancies are for economic reasons, the company must be able to demonstrate a drop in orders or turnover for a minimum period – for businesses with more than 300 employees, the loss must be over four consecutive quarters.

If the company has an employee representative group or unions, these too must be involved in the process. Where large numbers of employees are being made redundant, local political representatives would probably also be involved.

If the company has a convention collectif (collective agreement) which most large companies do, this may also cover the process around redundancies.

The company must then follow a strict process which includes calling a meeting with five days’ notice, offering retraining programmes then sending written notification of redundancy with at least seven days’ notice.

P&O’s practice of calling a same-day meeting and then telling employees via video that they were immediately out of work clearly meets none of the conditions for process.

What a company does next is also important – if employees are made redundant on the grounds of economic difficulty, but then new workers are quickly hired to fill the same roles, the original employee may have a case for unfair dismissal.

If the dismissal is found to be unfair by the Labour Court then the employee is entitled to damages – there is no legal maximum for these damages.