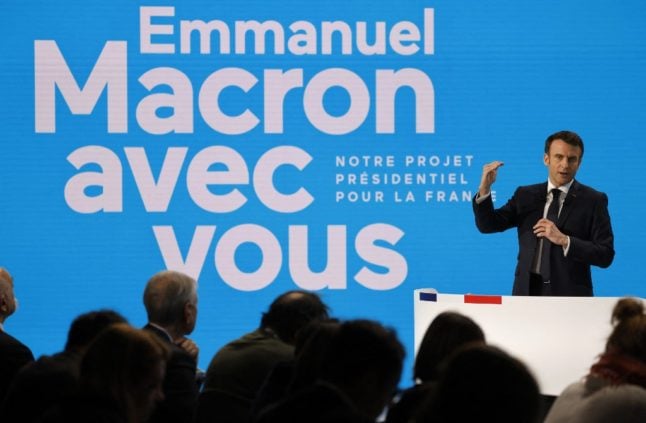 The 44-year-old had delayed confirming his intention to seek a second term until March 3rd and had been at the heart of Western diplomatic efforts to halt Russia’s invasion of Ukraine.

Speaking for four hours at his first major campaign event, he announced a programme aimed at deepening pro-business reforms started in 2017 to reduce chronically high unemployment.

“We have to work more,” Macron told some 300 journalists gathered at a venue in a northern Paris suburb, in front of giant screens showing his slogan Avec Vous (with you).

“We have two levers: full employment and reforming the pension system,” he said.

Macron acknowledged that he had been unable to push through the pension overhaul as promised in 2017, but pledged to tackle it again and push the retirement age from 62 to 65.

He also proposed reforms to the benefits system that would require the unemployed to undertake 15 to 20 hours of work or training per week.

Another politically risky change would see all social benefits – for unemployment, housing, or childcare – centralised in a single system, affecting up to 20 million French people.

Major new public investments in the military, the energy sector and new technologies were also required in order to create “an independent France in a strong Europe,” he said.

The programme “has been informed by the crises we’ve experienced in the last five years which we weren’t expecting,” he said, referring to so-called “Yellow Vest” anti-government protests from 2018, the Covid-19 crisis, and the war in Ukraine.

Legitimacy
Rivals across the political spectrum, who have struggled to make an impact as Russia’s invasion of Ukraine has dominated headlines, have accused Macron of neglecting the election campaign until now.

He has taken a leading role in Western diplomatic efforts to stop the war in Ukraine, holding 20 hours of talks with Russian leader Vladimir Putin in the last five weeks.

“The president wants to be re-elected without ever really having been a candidate, without a campaign, without a debate, without a competition of ideas,” the head of the Senate, Gerard Larcher, said on Tuesday.

“If there isn’t a campaign, then there will be questions about the legitimacy of the winner,” Larcher, from the opposition Les Republicains party, told Le Figaro newspaper.

In the most recent voter surveys Macron has gained five to six points over the last month and could be on course to win the first round of the election on April 10th with a score of about 30 percent.

Veteran far-right leader Marine Le Pen is running in second place, on around 18 percent, a poll of polls by the Politico website suggests.

She is trailed by three candidates at around 11-12 percent LR’s Valérie Pécresse, far-right former TV pundit Eric Zemmour and hard-left campaigner Jean-Luc Mélenchon, who appears to be gaining momentum.

The top two candidates in the first round will progress to a run-off vote on April 24th.

Polls suggest Macron will triumph by a large margin irrespective of his rival.

Behind the scenes, the president is reported to be urging ministers and campaign workers to guard against premature optimism – to limited effect.

“Macron is winning by default. It’s the others who are useless,” one senior supporter told AFP this week.

‘Desire to act’
Macron remains a divisive figure, dubbed the “president of the rich” by left-wing critics and criticised for his at-times abrasive personality.

Many of his proposed reforms will be subject to debate with stakeholders, he said, such as changes that would introduce more autonomy for schools and wage differences between teachers.

“‘With you’ is not just a slogan, it will be for me a new democratic way of working,” he said.

He also stressed his difference from the nationalist programmes of Le Pen, and Zemmour, without naming them. “There are programmes that propose a withdrawal, a return of a certain type of nostalgia, a nostalgia for something that never really existed,” he said.

“I believe on the contrary that faced with fears and a return of the tragic in our history, the war and the crises … we need to reply with clear-sighted ambition, a desire to act,” he said.