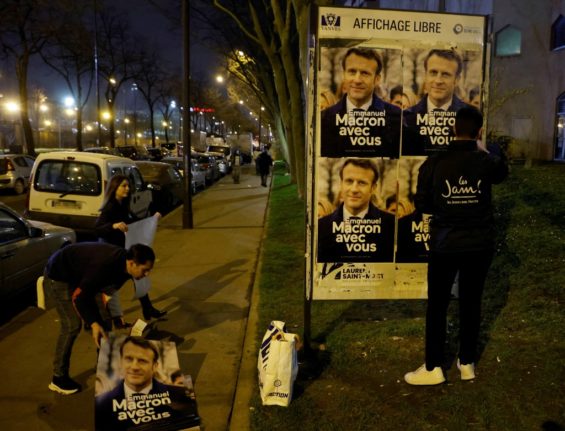 If you have always dreamed of seeing Emmanuel Macron in the flesh, registration is now open for this first big campaign event. Given the ‘limited’ campaign that he is running, it could be the only open-registration event of the 2022 election. Full details here.

He will unveil his manifesto at 3pm today in a Q&A event with journalists in the Paris suburb of Aubervillers.

Valérie Pécresse on Thursday was the victim of a campaign incident in which pink powder was thrown over her as she finished a speech to the association of small businesses.

The French language has a word – enfariné – to describe having flour (farine) thrown over you. As this powder was pink, we’re not sure that it strictly qualifies as enfariné, but it’s the second throwing incident of the campaign so far after Eric Zemmour had an egg thrown at him as he visited the south-west town of Moissac.

Speaking of Pécresse, her book is out today. Le temps est venu (the time has come) lays out her vision to “repair . . . restore France to face its destiny”. As far as we know there are no plot twists or sex scenes.

In possibly bad news for Eric Zemmour (whose answer to everything is cutting immigration) a new poll commissioned by France Télévisions shows that 7 in 10 French people do not think that immigration is the main cause of the country’s problems.

Former president Nicolas Sarkozy has not yet endorsed Pécresse, the candidate of his former party, and his silence is beginning to set tongues wagging, with speculation that he will instead endorse Emmanuel Macron.

Prime minister Jean Castex on Wednesday unveiled the government’s plan for protecting French consumers and businesses from the effects of price rises – here’s what it involves.

Emmanuel Macron has already announced that he will be in the south-west town of Pau on Friday, where he will meet with readers of local newspapers Sud-Ouest and La République des Pyrénées.

On Thursday Jean-Luc Mélenchon lays out his “plan of action’ – while the other candidates are contenting themselves with manifestos of the policies they will enact if elected, Mélenchon is laying out a plan to create a whole new system of government in France – a 6th Republic.

Meanwhile Nathalie Arthauld is in Toulouse, Valérie Pécresse in Nimes and Yannick Jadot at Université Paris-Dauphine.