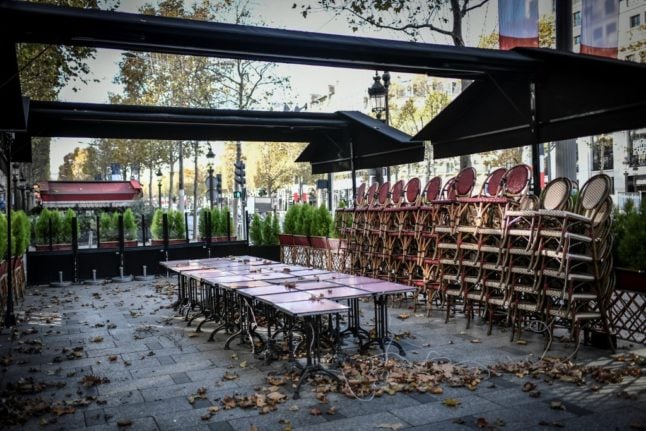 The cafes have reopened, but France has seen long-term change sparked by the pandemic. Photo by STEPHANE DE SAKUTIN / AFP)

Obviously the internet existed in France before the pandemic, many processes could be done online and some pretty useful apps already existed.

But there’s no doubt that the pandemic supercharged France’s digital transformation, to the point where the French contact-tracing and health pass app – TousAntiCovid – was one of the best in Europe.

While Germans presented cardboard vaccine booklets to enter restaurants and Brits waited months for an app that would display their vaccination certificates, TousAntiCovid moved (almost) seamlessly from contact tracing to virtual attestations to an EU-wide digital vaccine pass.

And it wasn’t just the app, lockdowns and office closures moved an increasing number of official processes – from residency cards to driving licences – online, dramatically accelerating the pace of digital switchover.

Likewise government rules exempting ‘click and collect’ services from lockdown rules prompted many French businesses to get serious about their online offering, while the number of shops accepting contactless card payments also saw a sharp increase.

Once introduced, these services are now here to stay.

Speaking of the digital revolution, many people also began to work online. For some this meant extra services such as télémedicine – online doctors’ appointments – but for most it meant doing their job remotely, usually from home.

Remote working existed pre-pandemic, but a combination of a less online culture and France’s strict labour laws meant that it was a comparative rarity.

Once people began working from home, many found that they liked it and even when it was no longer mandatory many people have continued to work from home, or used a combination of office and remote work.

Once the lockdowns were over, the government decided that remote working rules were a matter for employers, employees and their representatives such as unions. That has meant a more flexible approach with bosses and employees able to adapt télétravail in a way that suited them.

Connected to the online revolution is the sustained movement of people out of cities.

There has been a marked trend of people moving out of cities – either to the suburbs or to the countryside.

While lockdown gave people an appreciation for having more space, especially outdoor space, remote working meant that moving a little further away from the office suddenly became feasible for many.

The upshot is that property prices in the cities have dropped and even Paris prices have become fractionally less insane, so now is a good time to move or to invest.

A favourite tactic of French unions when in dispute with the government has been to call for transport strikes.

Sometimes these are directly related to transport such as a dispute over pay and working conditions, but in other cases they are on broader issues such as pension reform or ‘solidarity strikes’ with other industries – either way they tend to be very disruptive and newsworthy and governments often back down.

But while the 2019/20 transport strikes over pension reform caused widespread chaos, particularly in Paris as employees struggled to get to work, a 2022 Paris transport strike saw most workers shrugging and deciding to work from home that day.

Has the pandemic and télétravail dented the power of French unions? On verra . . .

Big state got even bigger

France was already a country with a big government, where the State was actively involved in most people’s lives but the pandemic took it up a gear.

The French ‘whatever it costs’ package of economic measures to support workers and businesses during the lockdown was widely copied, and has continued for hard-hit sectors such as tourism.

Since the start of the Ukraine war, France has also dedicated economic packages to refugees, Ukrainian artists and also to French people to protect them from increasing living costs.

Gas prices have been capped, two separate €100 grants have been issued to people on low incomes and the government has ordered filling stations to lower fuel prices by 15 cents a litre, with the shortfall made up from public money.

Some of this can probably be attributed to it being an election year, but the tendency of the French state to get directly involved seems to have been reinforced by the pandemic.

Kissing was scaled back

La bise, the distinctive French double (or treble, or quadruple depending on where you are) cheek kiss was effectively ruled out for a long time by rules on social distancing and hygiene gestures.

While it’s now making a comeback, some people are taking the opportunity to ditch the tradition or at least scale it down.

Even before the pandemic there were plenty of French people, especially younger women, who didn’t appreciate the social pressure to kiss all the time, and many have now taken the opportunity to restrict la bise to only family and close friends.

There’s no hard scientific data on this, but it seems that while kissing is definitely back, it might be less widespread than it was, and can be something that’s saved for your nearest and dearest.

Pre-pandemic, takeaway in France was generally limited to the junkier end of the food chain – pizzas, kebab etc. The concept of ‘gourmet takeout’ was not really a thing.

But during lockdown the government made the decision to exempt takeout sales from the financial support that food and drink businesses received, with the result that many restaurants began offering meals to take away.

Restaurants are now open again, but many have kept in place some kind of takeout option as an added extra. Likewise getting coffee to takeout has become more socially acceptable – although bagging a café table with a coffee remains a popular pastime.

People got on their bikes

A city trend that was already underway – especially in Paris – but cycling has seen a marked uptick since the pandemic, since many commuters remain reluctant to jam themselves into Metro carriages to be coughed over by fellow passengers.

The city of Paris set up coronapistes – temporary extra cycle lanes – many of which later became permanent. Several streets, including the Rue de Rivoli, never went back to allowing cars and are (in our opinion) much the nicer for it.

On the face it, confining people to their homes for long periods of time and shutting all bars, restaurants, music venues and basically everywhere fun does not seem like a vote-winner.

Emmanuel Macron went into the pandemic a divisive president whose term of office had been marked by major confrontations including the year-long ‘yellow vest’ protests and a two-month transport strike.

Two years on, and most pundits are predicting that he will win re-election in April.

Clearly many factors are at play here, including the weakness of his opponents and a ‘bounce’ from his handling of the Ukraine war, but even before the invasion of Ukraine Macron was a favourite to win and his handling of the pandemic – particularly the hefty packages of economic support – have played a part.