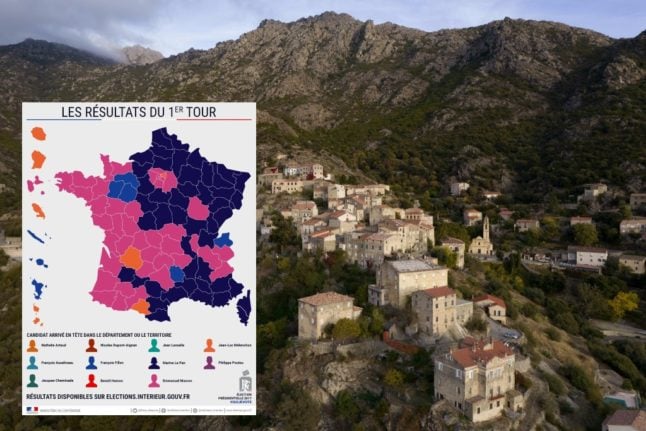 In French presidential elections, people vote directly for the president. There are no constituencies – the parliamentary vote comes later in the year – but data is collected on a département level showing how people voted in the first round.

The below map from the Interior Ministry breaks down the vote by département showing which candidate garnered the most votes in the first round of elections.

The two candidates who got through to the second round in 2017 were Emmanuel Macron and Marine Le Pen, so as you would expect, the map is heavily dominated by pink (Macron’s La République en Marche) and dark blue (Le Pen’s Rassemblement National). 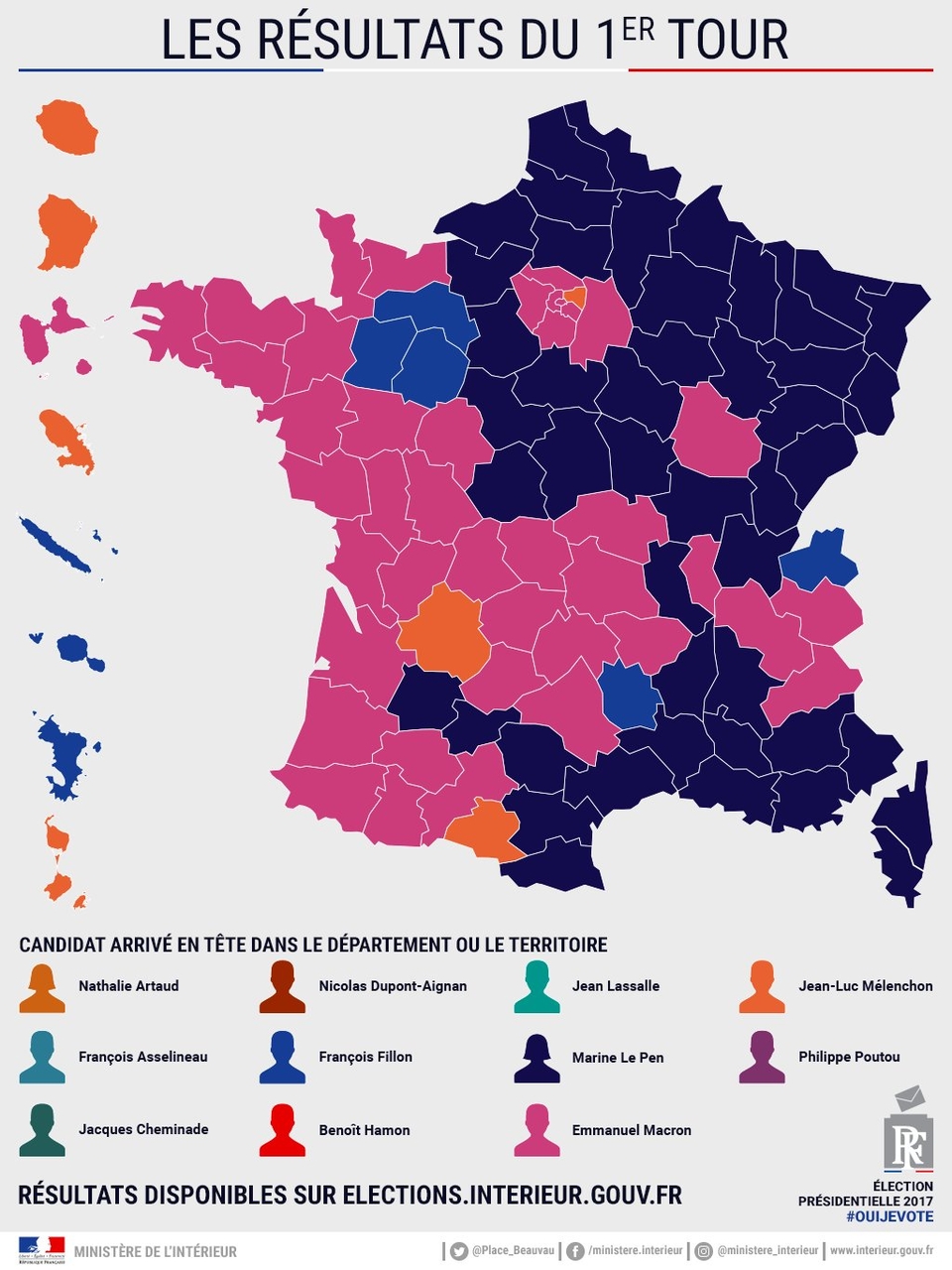 But is also shows a vertical divide of the country, with the west leaning heavily to Macron and the east inclined to Le Pen.

There are of course obvious exceptions, with Paris and its suburbs providing a Macron outpost while Le Pen performed strongly all along the south coast.

And even within these départements there are areas that buck the trend, but the east-west divide remains.

Here are some of the factors that help explain this:

Rust-belt – North-east France is a heartland for Marine Le Pen – it’s the country’s ‘rust belt’ – the former industrial and coal-mining areas that are now blighted with high unemployment levels.

It’s actually Emmanuel Macron’s home territory – he grew up in Amiens near the Belgian border – but in recent years Le Pen has consistently drawn votes from there, overtaking the Communist party in local sympathies.

Conflicted area – the Alsace-Lorraine area of France has a complicated history that includes being swapped back and forth between France and Germany several times, mostly during times of violent conflict.

This has left the region with its own distinct identity and local laws (Good Friday is a public holiday in this area, for example) but some suggest that its troubled history and general distrust of foreigners is also what makes the far right strong in this area.

Paris effect – Paris and the surrounding area were strongly for Macron as his pro-European, globalist and commercial message tends to resonance more strongly with young people who live in cities.

Of the eight départements that make up the greater Paris region of Île-de-France only one resisted Macron. That was Seine-Saint-Denis, one of the poorest areas of France, which went for the far left- Jean-Luc Mélenchon.

London effect – the map doesn’t show votes coming from French people abroad. French citizens retain the right to vote however long they live outside of France and even have their own MPs to represent their interests.

The French Consulate estimates that 270,000 French people live in London, making the French population there larger than cities including Bordeaux, Rennes and Le Havre. Anecdotal evidence suggests that French expats were strongly in favour of Macron, and indeed much of the financing for his campaign bid came from donors living in London.

South coast – Le Pen’s party has long done well on both a local and national level along France’s south coast, with one explanation being anxiety over the arrival of North African migrants from across the Mediterranean.

On a historic level, after the Algerian war of independent the south of France became home to many of the French settlers who left once Algeria gained its independence, and who were the first recruits to Jean-Marie Le Pen’s new political party.

Although the south coast counts some of the glitziest areas of France – such as Cannes and Saint-Tropez – it also has quite a lot of poverty and many areas feel resentments towards the ‘elites’ of Paris. Le Pen herself grew up in one of the wealthiest suburbs of Paris, but her party appeals to some of the people who feel left behind.

Western values – the whole of the left side of France is strongly pink on this map, especially Brittany, which has a long history or rejecting the far right (even thought the Le Pen family originate from Brittany).

This phenomenon has sparked plenty of cultural comment, since Brittany is a low-immigration area, and it is often areas with low level of immigration which are more receptive to an anti-immigrant message.

However Brittany also has its own strong regional identity, and some have suggested that the area’s seafaring past has made an outward-looking place, keen to develop trade links with the rest of the world.

Cities – there are of course exceptions, but in general cities lean towards Macron.

Presidential elections are not done on a constituency basis, the candidate just needs to get the largest total number of votes, so it’s clearly an advantage to appeal in packed cities rather than sparsely populated rural areas.

Macron’s message – cosmopolitan, relaxed about wealth-creation, keen to invest in business and technology – is well received in cities, with their generally younger population.

You can hear more discussion on this and other political issues on The Local’s podcast, Talking France.