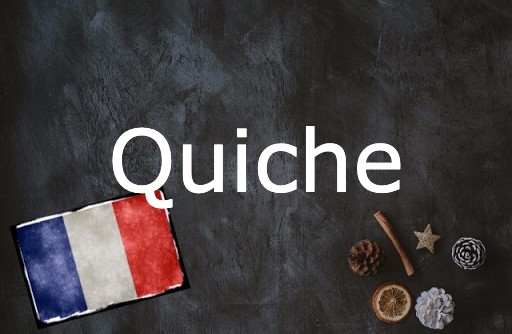 Why do I need to know quiche?

Because if someone calls you quiche, you have the right to be insulted.

If you have been in France for some time, there is no doubt that you have enjoyed a quiche Lorraine – a version which contains lardons or bacon – at some point.

However, this word is also used as an insult to describe someone as stupid or clumsy.

Vous êtes vraiment une quiche – You are truly an idiot

Quelle bande de quiche – What a group of fools

If you want to use quiche as a noun, to the same end, you can call someone an espèce de quiche – which literally translates as species of quiche.

Casses-toi espèce de quiche ! – Get out of here you idiot!

Quiche is thought to have come from a now defunct form of German, where it was variously written as kuoche, kuocho or kuoho. It was first written in French at some point in the early 19th Century.

While it is certainly rude to use quiche as an insult, most French people would not consider it to be a swear word. It is a bit like calling someone a nitwit.

Other uses of quiche

Unfortunately, the weaponisation of quiche does not stop there.

Continue comme ça et tu vas te prendre une quiche ! – Continue like that and you will get a slap

As a verb, quicher, is a slang way to talk about vomiting.

J’ai besoin de quicher – I need to be sick