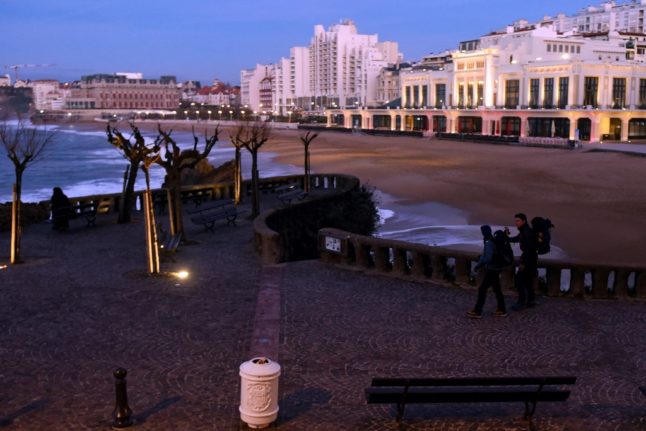 The villa is in the seaside town of Biarritz. Illustration photo by GAIZKA IROZ / AFP

A video posted by Pierre Lapurdi, a self described “Russian blogger in exile”, who writes under the pen name Pierre Haffner, provides a glimpse inside the luxury Biarritz building, which he dubbed “the castle of Putin”.

He has since been arrested according to a post on his social media account. His accomplice, a whistleblower called Sergei Savelyev, is also thought to have been arrested.

An exiled Russian dissident called Vladimir Osechkin called for their release from custody, in a Facebook post.

“These nice people have not done anything wrong. They and we have all proposed using the villas of Russian oligarchs to welcome Ukrainian refugees,” he said.

“Police must protect the people, not the oligarchs.”

An independent Russian news media called The Insider reported that the activists had found a copy of a passport belonging to Kirill Shamalov, the ex-husband of  Katerina Tikhonova (Putin’s daughter), at the property.

According to French radio station Europe 1 the Putin family owns at least three properties in Biarritz. Close friends and associates of the family, as well as a former Russian spy, have been spotted in the southwestern city in recent years.

French intelligence services are said to routinely run counter-espionage operations in the city.

Authorities have seized a number of Russian assets in recent weeks including a €108m yacht moored off the south of France, belonging to an oligarch named Igor Sechin.

France and the EU have slapped heavy economic sanctions on Russia after it launched an invasion of Ukraine last month.