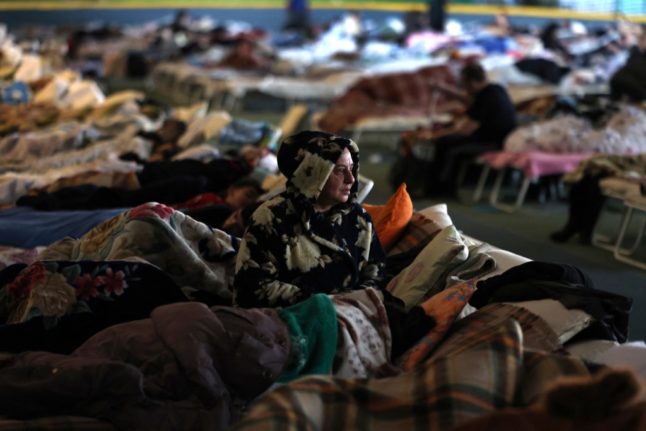 A Ukrainian woman at a emergency refuge in the main hall of an athletic complex in the Moldovan capital Kishinev. (Photo: Menahem Kahana / AFP)

Thousands of refugees from Ukraine have arrived in France already and the country is preparing to welcome as many as 100,000 people.

The number of Ukrainian refugees arriving in France “is increasing rapidly”, according to Prime Minister Jean Castex. France, along with other EU member states, does not require Ukrainians to have a visa for entry and has brought in a scheme to allow them to stay visa-free for at least a year.

The French government anticipates the arrival in the coming weeks of “50,000, maybe 100,000” people fleeing the conflict in Ukraine, Joseph Zimet, coordinator of the interministerial crisis unit, said in a press conference.

Minister of the Interior Gérald Darmanin also said that 7,500 Ukrainians had already arrived in France since the beginning of the war – and the country is ready to receive many more. “We have gone from 10,000 to 25,000 accommodation places in three days,” he continued.

The numbers heading as far west as France are just a small percentage of the total of more than two million refugees who have fled Ukraine since the beginning of the Russian invasion, according to the UN High Commissioner for Refugees.

France is also hosting Ukrainians who want to join family in the UK, but have been turned back at the border by British officials, since the UK still requires visas from Ukrainians who wish to enter the country.