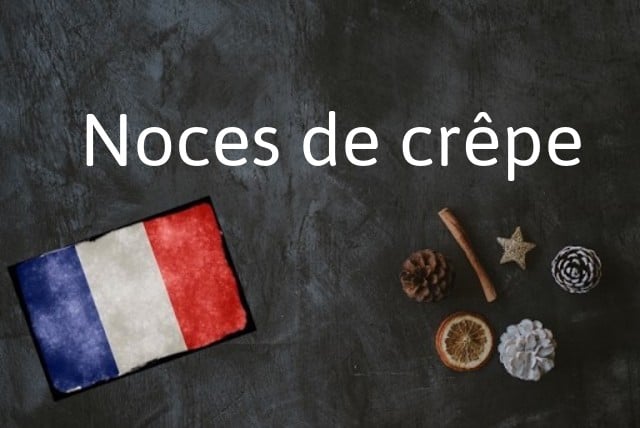 Why do I need to know Noces de crêpe?

Well, you might know someone who’s about to celebrate their 39th wedding anniversary.

Noces de crêpe – the crêpe wedding – is the wedding anniversary that is celebrated after 39 years of marriage in France.

It’s actually got nothing to do with pancakes, it refers to the fabric crêpe.

The word crêpe is derived from the Latin crispus, which means wavy. Over the centuries, that became cresp and then crêpe – the material – and, traditionally, those celebrating their 39th wedding anniversary would exchange gifts made of the fabric that has a distinctive wrinkled and bumpy appearance.

Apparently it indicates the wrinkles and bumps that a couple have survived over the course of their married lives.

In these less traditional days, a gastronomic gift is seen as equally fitting (even pancakes).

All French wedding anniversaries have their own traditional gifts, in the same way as they do in the Anglophone world. They don’t all have the same gifts though.