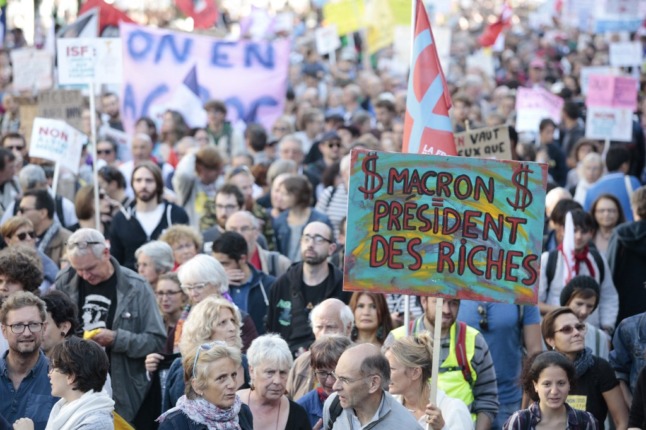 As part of the process of standing for president, all candidates must declare all their assets, which are published by the Haute autorité de transparence de la vie publique (High authority for transparency in public life). As the name suggests, this is supposed to be in the interests of transparency and honesty, but we rather suspect that most people read these in the spirit of celebrity gossip magazines. We’re not above that, obviously so here goes . . .

Top of the wealth table is centre-right candidate Valérie Pécresse, worth €10m including three houses, an original Joàn Miro artwork, healthy bank accounts and €1 million of shares in General Electric, the company her husband works for.

Emmanuel ‘président des riches‘ Macron doesn’t appear to be all that rich, declaring six bank accounts but no property. His wife Brigitte has a home in Le Touquet, where the couple are registered to vote, which dates from the days of her first marriage. He has received €900,000 in pre-tax salary during his five years as president.

At the other end of the wealth scale we have green candidate Yannick Jadot, who doesn’t own a car but does have a €4,000 electric scooter, Trotskyist Philippe Poutou who drives a Peugeot 308 and Communist Fabien Roussel and sovereigntist Nicolas Dupont-Aignan, who were both into their overdrafts when the declarations were made.

These claims date from 1999 to 2019 and refer to his previous career – before standing for election he was a journalist, author and TV pundit. The accusations include groping, forced kisses and sexual propositioning of mainly interns and trainees. Zemmour declined to comment to Mediapart, but his team said the accusations were “pathetic” and “recycled testimonies”.

The revelations come the week after Zemmour was the subject of a story in Le Canard Enchaîné which revealed that he had walked out of a posh Paris department store without paying for his purchases. Also last week he was ordered to pay €70,000 for breaching copyright in his campaign launch video.

OPINION: An election walk-over for Macron could see a return of ‘yellow vest’ style street protests

Emmanuel Macron used International Women’s Day to record a selfie-style video for his Instagram account, explaining how equality between the sexes has always been a key part of his five-year term.

He (or at least a Russian-speaker on his team) has also been busily tweeting in Russian as he continues his international diplomacy efforts.

In a reminder that Covid has not gone away, agriculture minister and close Macron confident Julien Denormandie won’t be doing any in-person campaigning this week after he tested positive. Get well soon Julien.

The latest edition of The Local’s Politics podcast, Talking France, is now out. Local editor Emma Pearson, veteran columnist John Lichfield and Sorbonne economics professor Claudia Senik join Ben McPartland to discuss the effects of the Ukraine war on the election, the latest on the candidates and how price rises will impact France – click HERE to listen.

Macron will be presiding over the regular Wednesday meetings of the Defence Council and Minister’s Council in the morning, before having lunch with Dutch PM Mark Rutte.

Anne Hidalgo, Marine Le Pen, Eric Zemmour and Valérie Pécresse are meeting with the metalworkers’ union to present their strategies for keeping industry competitive, then Zemmour, Pécresse, Hidalgo will be joined by Yannick Jadot and Jean-Luc Mélenchon to meet tech lobby groups.

Jean Lasselle begins his campaign today which is a tour of France by bus, his first stop is Bèziers in south west France.