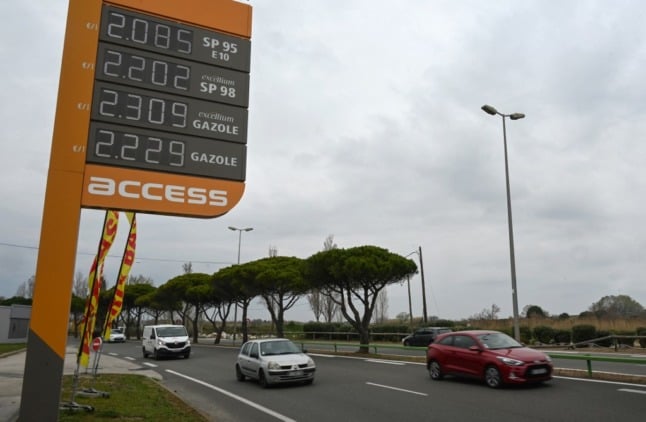 Vehicles drive past a board indicating energy prices at a petrol station in southern France. (Photo by Pascal Guyot / AFP)

The government is set to present next week the multi-stage “economic and social resilience plan” promised by President Emmanuel Macron in his TV bulletin to the nation.

The Prime Minister’s Office at Matignon, which has been charged with developing the plans, said on Tuesday that the plan would ‘evolve’ according to the needs of France and in response to possible counter-sanctions from Russia.

The announcement came after Prime Minister Jean Castex held a five-hour meeting with representatives of the economic sectors affected by the invasion and with trade unions and employers’ organisations.

But what is the plan likely to include?

The most important thing is, perhaps, what it won’t include. France’s Economy and Finance Ministry has said that – unlike the Covid pandemic – this is not a “whatever it takes” situation.

There is a great deal we don’t know, but it seems clear that the first stage will target help for households hit by rising prices as well as the most exposed businesses.

Petrol in France has already hit €2 a litre and is likely to rise, dealing a heavy blow to motorists in rural France, as well as businesses.

Macron has hinted at some of the packages he has in mind – suggesting that measures such as the €100 inflation allowance distributed in December, plus a mileage allowance for people who drive for work, may be brought in again.

“We are thinking about the [mileage allowance] tool” Matignon said, and has indicated that it will act to offset the rising price of fuel next week and urged motorists to remain calm – pointing out that France has enough strategic fuel stocks to cover the country’s needs for three months, even if no more oil was imported.

The resilience plan will consist of “a multi-stage response, with a package that will first deal with households and part of the (aid to) companies”.

For businesses, the sectors “have not asked for cross-cutting devices but rather targeted”, calling for “diverse responses”, observed the advisers of Matignon, citing the case of aerospace whose first supplier of titanium is a Russian company.

Gas and electricity prices in France are currently capped at a four percent rise until June, and the price cap could be extended beyond this date.

As of March 1st, 21.6 percent of France’s natural gas reserves were still available, according to BFMTV. Normally, stocks build up from now, as warmer spring weather arrives – though they are still affected by seasonal fluctuations. A cold snap in April, similar to last year, would see demand rise again, for example.

France is less exposed to uncertainty over Russian gas supplies, since it also has its own domestic nuclear sector for power.

However, the PM’s office said: “We need to fill up our gas reserves as much as possible, in anticipation of the coming winter.

“France has a challenge to reduce its vulnerability in the medium term in terms of energy.”

The plan will also offer support to businesses directly affected by sanctions against Russia as they seek to secure raw materials from other sources and to deal with increases in energy costs. Again the aid will be targeted and specific.

“Our entire economy is not at risk of a sudden stop. But there will be collateral damage for businesses and households,” the Prime Minister’s Office said.

“We have engaged a census of the companies most concerned by possible disturbances, I think in particular on the gas market” industry minister, Agnès Pannier-Runacher, told BFMTV.

It’s also likely that food prices will rise, both for imports and for domestically produced goods as farmers are hit by rising costs for fuel.

The agriculture industry has been among the sectors consulted and farmers have been singled out for support, in order that they will be able to minimise the price rises that they pass on to consumers.

The plan will be presented “next week”, government spokesman Gabriel Attal told journalists on Wednesday, without mentioning a specific date.