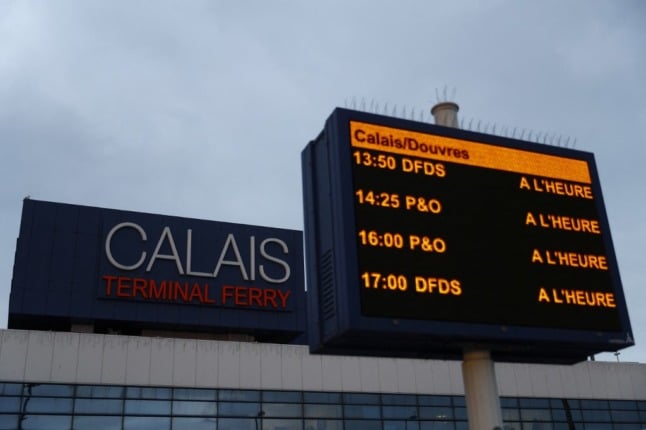 Ukrainians fleeing war have been turned back at Calais by British officers. Photo by Sameer Al-DOUMY / AFP

Local people have given nappies, toys and clothes and the town hall has provided food and beds for the hundreds of Ukrainians who have arrived since Russia invaded their country on February 24th.

But while France has waived visa rules and welcomed at least 5,000 Ukrainians, with more expected to follow, the people in Calais are en route to the UK.

Like thousands of others from around the world, they have come to Calais – a northern French town marked in recent years by tension over migration.

Reader question: Why don’t Ukrainian refugees stay in France instead of coming to UK?

Among them is Ihor Krainyk, a builder in his 40s. After more than 24 hours of nonstop driving, he can finally breathe.

He is based in London but travelled to the Slovakian border last week to rescue his wife and daughter who were fleeing the war in Ukraine.

In Calais he was given a room and a plate of roast chicken with chocolate mousse.

“Everything is well organised here. Thank you France!” he said.

The family’s difficulties are not over, however.

At the port of Calais, British customs officers told Krainyk he could return to England but his wife and daughter could not come.

If anyone in UK government tells you Ukrainians are not being turned away from Calais, do not believe them. https://t.co/7U3P3bhGbL

“We found ourselves here, exhausted, without knowing where to go,” he said.

“Fortunately, people are very welcoming and told us to sleep here”.

The town’s mayor lodged the Krainyk family in a youth hostel. The number of Ukrainians sleeping there each night has reached about 120.

“I was going to pay, but they told me – no, it’s OK,” said Aleksandra, an energetic 50-year-old wearing a metallic grey jacket. “It is true we are welcome”.

But the warm welcome does not necessarily extend beyond Calais.

The British government has created two pathways for Ukrainians – family reunions with relatives already in Britain, and a new “sponsorship” scheme for organisations and individuals to bring in others.

But the application process is complex and ever-changing.

Of the 625 Ukrainians who applied for a visa in the Pas-de-Calais region to join their family in the UK since the beginning of the war, 306 have been rejected by the British authorities, the French local authorities said on Tuesday.

The local delivery of UK visas to Ukrainians has turned into a new source of tension between Britain and France.

France’s Interior Minister Gérald Darmanin accused Britain of a “lack of humanity” after saying that 150 Ukrainian refugees were turned back at the Channel port.

At present the visa process requires an in-person interview in either Paris or Brussels before people can travel. Britain then said on Monday it was sending visa officers to Calais to help expedite the processing of visas for Ukrainians, but it later appeared that visa help will actually be in Lille, 110km away.

Oksana Savchenko, a British citizen of Ukrainian origin, came to Calais to get papers for her sister living in Poland with her baby.

“My sister clearly has a right to entry. But we do not know where we should tell her to go. We are expecting an appointment, maybe in Paris, maybe in Brussels, and we don’t know when we will know,” she told AFP after meeting UK immigration officials last week.

She ended up having to go all the way to Warsaw to help her sister, who still does not have a visa for the UK.

While Ukrainians are received warmly in Calais, others are not. In 2016 police dismantled a giant migrant camp known as “the Jungle”, but that did not stop migrants from coming.

Migrants from Sudan, Afghanistan and Syria are still regularly chased by the police and expelled from tent sites in the area.

In contrast, the town has opened its arms to refugees fleeing Ukraine since Russia invaded.

Overall more than two million people are estimated by the UN to have fled Ukraine.

The measures have led other migrants and activists to question why the Ukrainians are getting special treatment.

Steps away from the hostel, a group of Sudanese men sit on a slab of concrete eating a cold meal. They are waiting for a truck to smuggle them to the UK.

“In our country, too, there is war, militias”, said Omar, 33, who arrived from the Sudanese region of Darfur several months ago.

“All of us would like to go to England. But here we are suffering, every morning the police come and tell us to move our tents,” he said.

“Maybe because we are black, Africans.”

Francois Guennoc of the Auberge des Migrants, a coalition of associations assisting migrants, said all of them should receive the help the Ukrainians are getting.

“It is great to see all this being put in place. But we would like everyone fleeing war to be treated like this. If the British authorities open an office in Calais, why should it be reserved for Ukrainians?” he added.

“A refugee is a refugee. There should be no discrimination.”

Bouchart noted that the EU had granted “temporary protection” to refugees fleeing the war in Ukraine.

“The difference is that Ukrainians are in a regularised situation,” the mayor said.