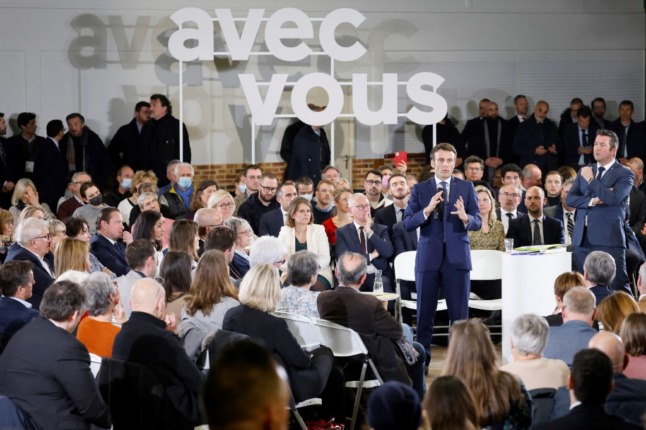 President Emmanuel Macron gave an accomplished but odd performance at his first event of the 2022 presidential campaign on Monday.

He switched hats constantly during a supposedly unscripted town hall debate at Poissy in the outer western suburbs of Paris. “Now, I’m replying as the President,” Macron would say. “Now it’s the candidate who’s speaking.”

Macron’s people denied that the meeting had been choreographed. They pointed to the fact that the President (and candidate) had taken several awkward questions on migration and the cost of living. Hmm.

This is scarcely Putinesque levels of disinformation.  It raises awkward questions, all the same, about how President Macron plans to approach what his team promises will be a “lightning campaign…close to the people.”

More to the point, how do you fight an election campaign that have already won?

Macron is now at over 30 percent in first round polls for the first time in this campaign. All his rivals are static or falling. Since the start of the Ukraine war (given the Putin fellow-travelling of three of his principal opponents), the result of the second round on April 24th is not in doubt.

If he is widely seen to have won by default – by hiding from one battle because of his legitimate preoccupation with another, far grimmer one – he could face a difficult second presidential term.

Let’s be honest. Macron would have faced a difficult second presidential term in any case. There is a large chunk of France, on the hard left and on the hard and far right, which will always regard him as an accidental or imposed President.

That was one of the arguments against him made by the Gilets Jaunes in 2018, even though Macron had won the second round the previous year with 66 percent of the vote. Events did favour him in 2017, leaving him with the easy task of beating a fumbling Marine Le Pen. But he was also rewarded by his own foresight and audacity.

It is my belief that Macron would have won again this year even if Vladimir Putin had not invaded the 21st Century. The usual suspects will claim nonetheless – some of them are already claiming – that they were “robbed” of victory by events in Ukraine.

Nothing will change the minds of the diehard Zemmouristes, Lépennists and Mélenchonistes or perhaps, more accurately, prevent them from cynically advancing such arguments. It does matter, however, how widely and plausibly such a case can be made.

It matters that Macron is seen in the next month to expose himself to something like the usual rough-and-tumble of democracy. It matters how big the turnout is in both rounds of the election on April 10th and 24th. It matters how well Macron and his allies do in the parliamentary elections on June 12th and 19th (a complex issue to which I will return in another column).

The daily Ifop opinion poll for Paris Match has @EmmanuelMacron at 31.5% first round support tonight, 6.5 points up since 🇺🇦 war began 2 weeks ago. Note also Le Pen, despite carrying considerable pro-Putin baggage, is now clear favourite to reach the 2nd round with Macron 1/2 pic.twitter.com/FLDR6QXyt3

Whatever happens in the Ukraine war, the world is likely to face a recession and crippling shortage of energy and some kinds of food in the next year or more. Since France is a country where anger goes rapidly to the street, some kind of possibly violent French backlash – by unions, by farmers, by resurgent Gilets Jaunes – is probable by the end of this year.

The signs so far are worrying.

The President let it be known yesterday that he would refuse to take part in televised debates with all the other 11 candidates. He would probably have refused even if there had been no war in Ukraine.

Such an event would, admittedly, be an absurd spectacle, like the teacher taking on the whole class at football. In the circumstance, however (ie Macron’s almost certain victory on April 24th), I think that the President would have more to gain from taking part than from refusing.

It also seems likely that Macron will hold very few large public rallies. One that had been planned in Marseilles last Saturday was cancelled.  Big rallies of the faithful may seem pointless in the TV and social media age but they fulfil an important function in energising the candidate’s base support (ask Donald Trump).

The main Macron plan seems to be to hold a series of town hall meetings like the one in Poissy yesterday, where the President strolls around with a microphone demonstrating his detailed knowledge of all issues from nuclear war to dairy farming.

This approach was very successful for him in the Great Debate which he organised nationwide to sap the anger of the Gilets Jaunes movement in early 2019. It will only work, however, if the meetings are seen to be open to (non-violent) critics as well as supporters.

Macron cannot lose this election. He must, despite his entanglement in terrible events elsewhere, be seen to contest it.

He must run for re-election, not walk.