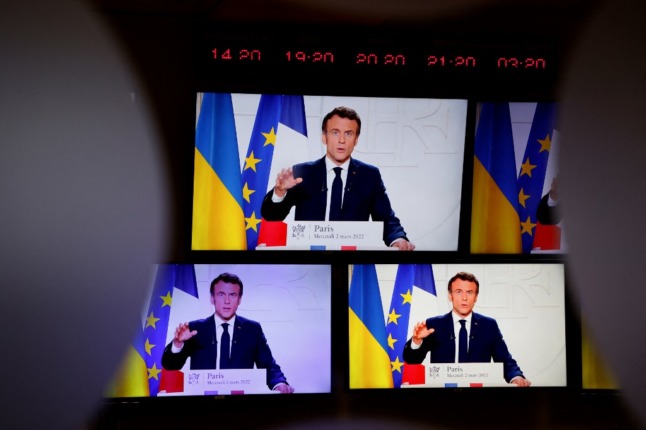 French president Emmanuel Macron addressing the nation on the subject of the war in Ukraine. Photo by Ludovic MARIN / AFP

A day before the official deadline President Emmanuel Macron announced, to the surprise of precisely no one, that he will stand for a second five-year term in office. He already had more than enough signatures of sponsorship before he declared his candidacy.

International events he said, without directly mentioning the Russian invasion of Ukraine in an open letter to voters, meant he could not run a campaign as he had intended.

Here, we examine key points from his letter to the electorate.

Elections: 5 key points from Macron’s letter to the French people

Macron had earlier set a deadline for lifting almost all Covid-19 restrictions in France – including a ‘suspension’ of the vaccine pass requirement to enter a range of venues.

The decision caught some by surprise, but cases and hospitalisations are falling rapidly, which prompted Macron to set a March 14th deadline on the vaccine pass.

Read about the timeline to a mostly mask-free future here.

That news, and the long-awaited return of lighter nights – not to mention the blossom starting to appear on the trees, and spring flowers pushing up through the soil – may have you thinking about breaking out of the shackles of a stay-at-home, stay-warm post-Christmas winter existence.

Here, we outline festivals and events that could take your fancy over the next couple of months.

Speaking of a long-awaited return, singer Stromae is back with his first album in nine years. It turns out that there’s rather more to the talented Belgian-Rwandan artist than slick tunes and smart dance moves.

We’ve put together this primer for you.

Stromae: 5 things to know about one of France’s best-loved artists

Journalists at The Local know as well as anyone that moving from one country to another can be difficult, but from bank accounts to driving licences, tipping to customer service, there are some particular challenges for Americans in France, as we explain here.

We point you in the direction of the solutions, too…

What are the biggest challenges for Americans in France?

We can’t pretend it is always easy, however. Sorry. But here’s a handy French word to describe your situation dealing with French bureaucracy.

French Word of the Day: Calvaire