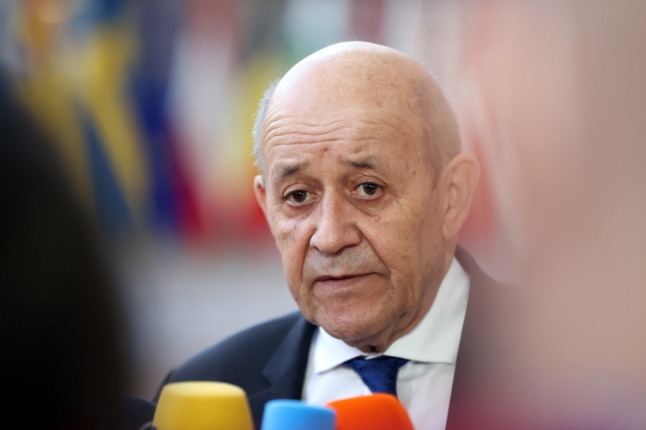 “I think it is possible that the worst is ahead of us,” Foreign Minister Jean-Yves Le Drian told France 2 TV, saying that Russia would look to besiege cities after its initial expectations of a quick victory were scuppered by Ukrainian resistance.”

The foreign ministry on Thursday also “strongly” urged its citizens to leave Russia if their presence there was “not essential”.

“In the context of the invasion of Ukraine by Russia and following the imposition of international sanctions, we must increase our vigilance,” the foreign ministry wrote on its website. Already on Sunday, Paris had recommended French citizens passing through Russia to leave the country.

Le Drian told France 2: “The Russians entered Ukraine looking for a blitzkrieg, a fast advance that would allow Russia to control Ukraine.

“It was not the case, due to the exemplary, courageous and strong resistance from the Ukrainians.”

He said after the fall to Russia of the southern city of Kherson – confirmed by Ukraine overnight – centres including Kharkiv in the east, Mariupol in the south and Kyiv itself were at risk of encirclement.

“As fores build up around those cities we can fear a siege mentality,” he said.

Le Drian recalled past Russian tactics in the war in Syria and also against separatists in the region of Chechnya.

“The Russians are used to this – remember Aleppo, Grozny. This could be very grave. The disaster continues and Russia’s despicable aggression continues.”

Asked what President Vladimir Putin’s strategy was for Ukraine, Le Drian replied the Russian leader wanted “the negation of Ukraine and the negation of a democratic country on his doorstep.”

He said that the tensions over the pro-Moscow Ukrainian breakaway regions of Donetsk and Lugansk ahead of the Russian invasion on February 24th were just an “alibi, a pretext”.

“Putin’s wish is to avoid having democratic models on his doorstep that could eventually have an influence on the development of Russia,” he said.

Le Drian is due later on Thursday to visit Ukraine’s neighbour Moldova in a show of support for its pro-EU government as Russian forces seek to press further east.