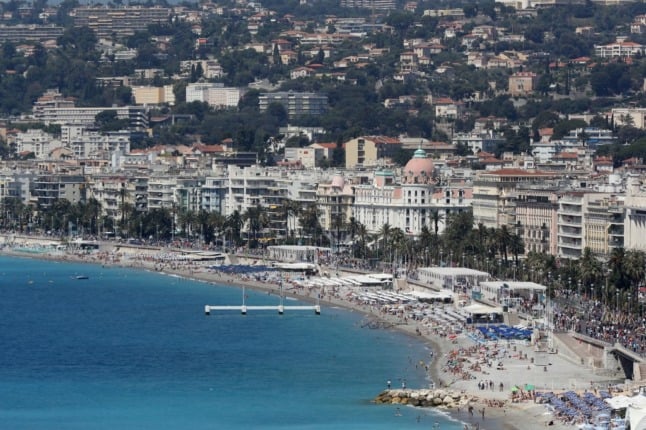 The Cote d'Azur is a popular destination for wealthy Russians. Photo by Valery HACHE / AFP

French customs announced on Thursday their first seizure – the yacht Amore Vero, owned by sanctioned Russian billionaire Igor Sechin, has been impounded in the marina at La Ciotat on France’s Mediterranean coast.

The EU has imposed sanctions on a number of Russian oligarchs and allies of Russian premier Vladimir Putin in response to Putin’s invasion of Ukraine.

Around 500 Russians and Russian businesses are now subject to EU sanctions including Putin himself, his political allies and some of the country’s richest men.

Among the high-profile names are Sechin – a close Putin ally and head of state oil giant Rosneft.

He added that the French finance ministry has created a ‘task force’ of customs officers, tax officers and ministry officials to draw up a list of oligarch-controlled assets in France and begin seizing them.

These actions are being replicated around Europe – on Thursday authorities in the German port of Hamburg seized a $600 billion yacht belonging to sanctioned Russian billionaire Alisher Usmanov.

So what are the French seizures likely to look like?

The UK has in recent years earned itself a reputation as a centre for Russian money, with London nicknamed ‘Moscow-on-Thames’ because of the number of wealthy Russians basing themselves there.

In the UK Russian oligarchs own newspapers, football clubs and sit in the House of Lords.

In France they tend to have a lower profile, but are still significant investors, especially in property in Paris and on the French Riviera.

The Riviera has long been the playground for the international super-rich and many Russians own yachts that are moored in resorts like Cannes and Saint-Tropez, and properties to enjoy the southern French summer in.

However, the EU sanctions are targeted at close allies of Putin, not all wealthy Russians.

Carole Grimaud-Potter, a professor in the geopolitics of Russia at the University of Montpellier, said: “We must separate two types of oligarchs, who are not linked in the same way to Putin.

She told French magazine Marianne: “There are the businessmen who acquired colossal fortunes in the chaos of the 1990s and who are quite distant from the president. From his first years in power, he wanted to bring them into line. They made a kind of deal. Their fortunes and businesses were guaranteed on condition that they did not interfere in politics.

“Most of them went into exile, notably in London. And those who criticised Putin got into trouble. Mikhail Khodorkovsky, who was the richest man in Russia, was imprisoned.

“It is necessary to distinguish these businessmen from the oligarchy that is really close to power, but are more discreet. You don’t see them on yachts in Antibes.”

High-profile Russian businessmen who flock to the Riviera, are prominent at the Cannes film festival and buy vineyards – including the vineyard formerly owned by Brad Pitt and Angelina Jolie – may not be covered by the sanctions.

Nonetheless, the French finance ministry says that the list it is collating includes assets such as property, bank accounts, yachts, luxury cars, ski chalets in the Alps and private jets.

Away from the Riviera and the Alps, Paris has also seen significant property investment from the international super-rich, including Russians.

In 2018, the four central arrondissements of Paris – comprising some of the most beautiful and historic areas of the capital – were merged into a single district for electoral purposes. The reason for this was that not enough people lived there full time, meaning that the electoral roll for local elections was becoming too small.

“No oligarch will slip through our net,” promises Le Maire.