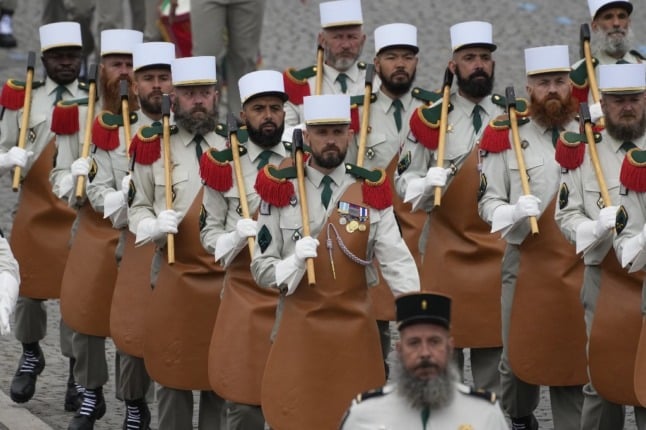 The Legion has reported 25 desertions by Ukrainian-born soldiers, with around a dozen of them believed to be planning to help the fight against the Russian army.

The Legion has “cut them loose”, commander Alain Lardet told AFP. “They are fighting for a cause that it is not my role to judge.”

Nine in the group that were stopped were on leave but not authorised to travel abroad when they were stopped Tuesday in Paris. The others were absent without leave or considered missing, added Lardet.

They were arrested on a coach headed for Poland neighbouring Ukraine, which has been battling a Russian invasion for the past week.

The Foreign Legion, an elite corps comprising around 9,500 soldiers, is the only French army unit in which foreign nationals can enlist.

They qualify for French nationality after several years of service, or sooner if they distinguish themselves in battle.

It was not immediately clear whether the 14 were planning to join the fighting in Ukraine, or simply help their families who had fled Ukraine, the military command said. No weapons or other unauthorised equipment was found on them.

But some of the civilian passengers on the bus were carrying gear that led the authorities to believe that they were planning to join the fighting.

The Foreign Legion counts 710 soldiers of Ukrainian origin of whom 210 have been naturalised, and 450 Russian-born troops.

While there has been “no tension between the communities” since Russia invaded its neighbour, Ukrainians in the Foreign Legion have been “very worried for their families”, Lardet said.

They can apply for an exceptional two-week leave to travel to one of Ukraine’s neighbouring countries to assist their families fleeing the war, but are not authorised to cross into Ukraine itself, he said.

On Tuesday, 25 such permits were granted, with several more expected Wednesday, but none of the Ukrainians arrested on Tuesday were in possession of such a document.

The nine who had regular leave for France only are unlikely to be punished because they had not been told properly that there was now a legal way to join their families, the commander said.

But the five others will be ordered into military detention for an unspecified number of days, having committed “a serious violation of the Legion members’ code of honour”, he said.

The systems, called MAMBA or SAMP/T, are a vehicle-mounted battery of medium-range missiles designed to offer protection from airborne threats such as missiles and manned or unmanned aircraft.

The missile systems, jointly developed by NATO members France and Italy, will help Ukraine “defend itself against Russian drones, missiles and aircraft”, the ministry said.

The deliveries were a response to an urgent request by Ukraine’s defence minister Oleksiy Reznikov made to his French and Italian counterparts to assist with “the protection of civilian populations and infrastructure from Russian air attacks”, it said in a statement.

During a visit by Reznikov to Paris on Tuesday, French Defence Minister Sebastien Lecornu had already announced that his country would ship 12 more Caesar truck-mounted howitzers and fresh air defence equipment to Ukraine.

France has yet to commit to sending Leclerc main battle tanks to Ukraine, another insistent request by Kyiv.

The MAMBA delivery had been under discussion for several weeks, and was finalised Friday in a phone call between Cornu and his Italian counterpart, Guido Crosetto, the statement said.

The systems, similar to the American Patriot systems, are to be delivered in the spring, the French ministry said.

One MAMBA was last year deployed in Romania, a NATO member sharing a border with Ukraine. With its range of 100 kilometres (62 miles) “we can fight a wide range of airborne threats”, a member of the French military with experience of the system told AFP in December.

These include short-range ballistic missiles, fighter planes, helicopters, drones “and even salvos of cruise missiles with multiple warheads”.

France has also promised to ship a radar system of the Ground Master 200 type made by French defence contractor Thales to Ukraine.

The radar allows detection of enemy airborne forces at 250 kilometres, and fight them at 100 kilometres. The radar, which can be moved by truck, also detects mortar and artillery fire at launch, acting as an early warning system.