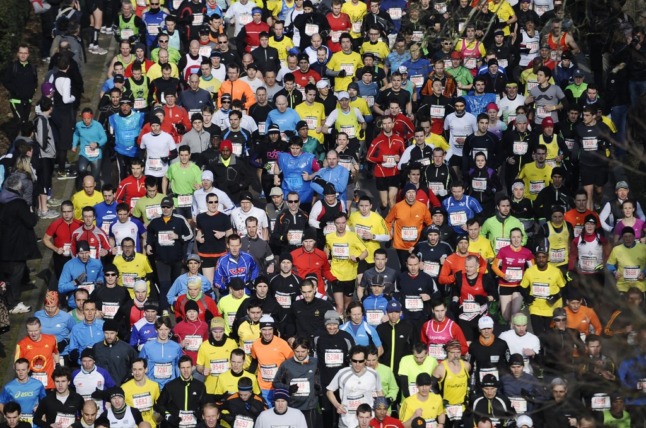 Competitors part in the Paris half marathon. (Photo by LIONEL BONAVENTURE / AFP)

Covid rules relaxed – masks will no longer be obligatory in venues that require visitors to show a vaccine pass such as bars, restaurants, cafés, cinemas, theatres, tourist sites, large events, gyms, concert halls and libraries.They will still be required for all indoor spaces that do not require a vaccine pass, such as shops and workplaces and on all public transport.

The testing protocol for people who have come into contact with someone infected with Covid will also be eased. You will still need to take an antigen or PCR test on the day you come into contact with an infected person (or as soon as you realise this was the case). But instead of two follow-up self-tests on Day 2 and Day 4, you will only need to take the Day 2 test.

READ ALSO What changes in France on Monday

Farm Show – three presidential hopefuls are scheduled to visit the Paris Salon de l’Agriculture on Monday – Valérie Pécresse of the centre-right Les Républicains, Anne Hidalgo of centre-left Parti Socialiste and Communist candidate Fabien Roussel. The show is regarded as a must-visit for anyone who has presidential ambitions – Emmanuel Macron visited on the show’s opening day on Saturday, albeit a shorter than usual visit due to the war in Ukraine.

Political discussions on Ukraine – debates on France’s response to the Russian invasion of Ukraine will be held in both houses of the French parliament. Jean-Yves Le Drian, the French Foreign Minister, will meet with his Polish and German counterparts in Poland to discuss strategy.

Presidential candidates present health policy – the pandemic has been a dominant theme of the last couple of years and will be central to the presidential election in April. Those seeking to win the presidency will lay out their plans for running the country’s health system in an event organised by Mutualité Française. You can find details on how to watch live here.

Toulouse introduces low emissions zones – the southwestern French city of Toulouse becomes the latest place to introduce a  zone à faibles émissions (ZFE) in a bid to reduce air pollution. The 72 square kilometre zone will encompass the entire city and a number of suburbs. The most polluting vehicles will be barred from driving. More details on the city website here.

Deadline to register to vote – if you want to vote in the upcoming presidential and legislative elections, the deadline to register online is Wednesday. Friday is the deadline for registration if you are doing so at your local mairie (with this form) or for postal applications (this form). In order to vote in these elections, you must be a French citizen over the age of 18.

Election deadlines – as well being the deadline for voters to register, Friday is also the final day when people who intend to run for president can declare themselves as candidates. It’s also the deadline to have the 500 signatures of support necessary to make it onto the ballot paper.

Cancelled – Macron’s Marseille rally – French President Emmanuel Macron’s team had announced his first formal election event, a rally in Marseille, would take place on Saturday. However on Monday this wan cancelled, because of the situation in Ukraine. Polls suggest that he is the favourite to win in April. Our columnist, John Lichfield, has argued back in November that despite not yet declaring his intention to run, Macron had already been campaigning in all but name.

Paris half-marathon – the French capital plays host to the country’s most popular half-marathon on Sunday. More than 44,0000 runners will take part. The route passes through Bastille, Rue de Rivoli, the Hôtel de Ville, Quais de Seine, Bois de Vincennes and the Pont de Tolbiac. If you think you can hack 21.09km, it is not too late to register. You can do so, from just €49, here. To compete you will need a medical certificate from a doctor ruling that you are fit to run and a valid vaccine pass.