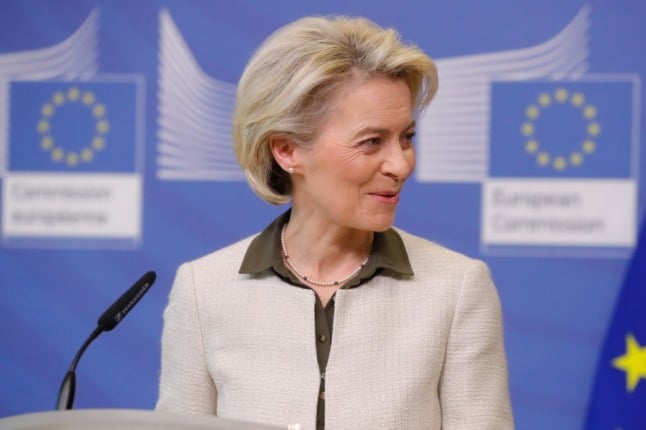 Her full statement did not go into much detail on exactly how the new rules will apply.

It’s likely that there will be further clarifications in the days to come, but here’s what we know so far;

EU member states will discuss on Monday using a little-known rule called the Temporary Protection Directive to allow Ukrainians to stay within the Bloc for up to a year without a visa. France is one of the countries pushing for this directive to be put in place, according to Interior minister Gérald Darmanin.

Since 2017, Ukrainians have benefited from the 90-day rule, which means they can spend 90 days out of every 180 in the EU or Schengen zone without needing a visa.

“We need to be prepared for day 91,” EU home affairs commissioner Ylva Johansson said on Sunday.

This change would not affect entry to the Bloc – the 90-day rule means that Ukrainians can already enter without having to show a visa – but once here they would not be required to make an application for asylum.

Ursula von der Leyen said: “We welcome with open arms those Ukrainians who have to flee from Putin’s bombs and I am proud of the warm welcome that Europeans have given them.

“We are mobilising every effort and every euro to support our Eastern Member States – to host and take care of these refugees.”

Paris Mayor Anne Hidalgo also announced that the city will offer accommodation to Ukrainians who need it, although again details are to follow in the next few days.

Russian-owned, Russian-controlled or Russian-registered planes are now barred from all EU airspace, including the airspace over France. They will not be able to take off or land anywhere in the EU, or fly over EU airspace. This includes commercial airlines and private jets.

There is, however, no travel ban on Russia, so people can still travel between France and Russia on either a non-Russian airline or by road, rail or sea. On Monday Russia announced a reciprocal ban on the airlines of 36 countries, including France. However most European airlines, including Air France, had already suspended routes to and over Russia.

France’s Covid-related travel rules are still in place and Russia is on the orange list, which means that people who are not fully vaccinated can only travel if they are travelling for an essential reason – having French citizenship or residency counts as an essential reason to travel – find the full list here.

Fully vaccinated travellers can come to France for any reason and do not require a test. Unvaccinated arrivals who qualify for travel need to present a negative Covid test at the border. France does not recognise the Russian Sputnik vaccine.

France has advised all its citizens living in Russia or Belarus to leave.

If you have any financial dealings with organisations or individuals in Russia, these could become difficult in the coming days.

The EU has agreed to disconnect Russia from the Swift network, which is a communications network used for making international money transfers, and von der Leyen also announced sanctions on Russia’s central bank

If you have recently ordered anything from Russia you may find there are delivery issues even if your payment goes through without problems.

Economic sanctions mean that certain cargo from Russia can be seized or blocked from entering the EU. Over the weekend French customs officers intercepted and halted a ship in the French port of Boulogne-sur-Mer whose cargo was destined for St Petersburg.

The EU has also banned Russian state media outlets including Russia Today (RT), Sputnik and their subsidiaries. Exactly how this will work is not yet clear, with Von der Leyen announcing that the EU is “developing tools to ban their toxic and harmful disinformation in Europe”.

RT has a large presence in France, employing around 100 people.

After previously announced targeted sanctions against certain Russian oligarchs and those close to the Putin regime, the French finance minister ordered the creation of a list of assets in France for seizure, including bank accounts, property and boats.

It is believed that many of the oligarchs on the list own property in France, including apartments in the nicer areas of Paris and holiday homes on the French Riviera.

Previously announced economic sanctions on Russia are likely to lead to price rises throughout Europe, particularly for oil, gas and petrol.

Thanks to its heavy dependence on the nuclear sector, France is less reliant than some countries on Russian gas, but prices are still likely to rise from June, once the current government-imposed price limit expires.

The price of petrol and diesel, already at its highest rate for years in France, is also likely to rise.

A meeting of EU energy ministers on Monday is to look at ways of controlling price rises.

And if you’re a Eurovision fan, don’t expect to see a Russian entry at the contest in May, the European Broadcasting Commission has announced that Russia is barred from the 2022 event.