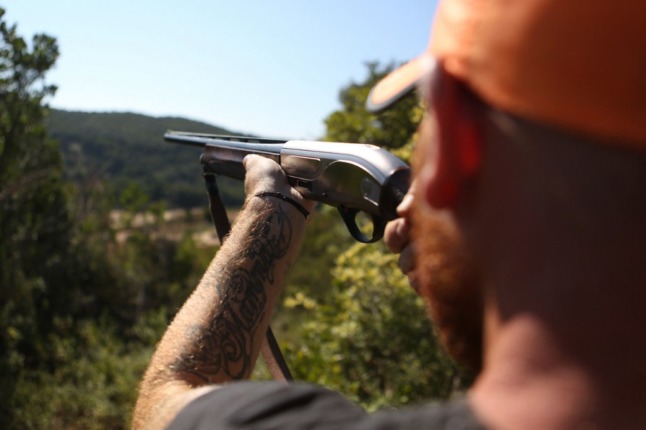 Hunting is becoming an ever-larger theme in the French Presidential election. But where do the candidates stand? (Photo by Pascal POCHARD-CASABIANCA / AFP)

The accidental killing of a 25-year-old hiker by a stray bullet over the weekend has led some campaigners to call once again for restrictions on hunting in France.

“We need a political response because unfortunately, the death of this woman is not an isolated case,” said Christophe Marie, a spokesman for the Brigitte Bardot Foundation.

“We are demanding a much stricter regulation of hunting and days without hunting so that we can better share nature,” he told FranceInfo.

As well as the animal welfare issue, an increasing number of people are calling for hunting to be restricted on safety grounds – particularly shooting, which results in the death of around 20 people every year in accidents.

During the 2020-21 season, runs from around September-February, there were 83 hunting accidents – seven of which were fatal.

With the presidential election fast-approaching, candidates are in a tricky position. Measures to better protect the public and animals may go down well with some sections of the public – an IFOP survey in 2021 found that only 18 percent of the population had a favourable view of hunting.

But restrictions risk alienating the hunting lobby which is seen as an important rural constituency (around 1 million French people hold hunting permits).

While none of the leading candidates are calling for a blanket ban on hunting, they do have some policy differences. Here is where they stand:

French President Emmanuel Macron has yet to declare his intention to run for reelection, but is highly likely to do so in the coming days.

His government has been reluctant to regulate hunting, but did ban glue-traps (coating branches with glue to capture birds) last year.

However in October, the government reauthorised previously illegal “traditional hunting” methods of 115,000 species of bird, banned by a 2009 European directive.

Macron’s former environment minister, Nicolas Hulot, resigned in 2018 in protest against the influence of the hunting lobby on policy-making.

Some French media speculate that Emmanuel Macron may soon announce an elevated quota of the number of wild boar that can be shot during the hunting season.

The current environment minister has said that she is open to discussions on banning minors from obtaining hunting permits and limiting the number of days during which hunting can take place.

The far-right candidate is against a partial ban on hunting at the weekend and school holidays.

She has said that on a personal level, she is against using dogs and horses for hunting (chasse à courre), a widespread rural practice in France.

However she is not against shooting, which is the most common form of hunting in France.

In front of a hunting lobby group earlier this month, Valérie Pécresse, candidate for the centre-right Les Républicains, called on ecologists to “stop hunting the hunters”.

Her campaign manager is an avid practitioner of chasse à courre.

She told France 2 that she was against a blanket ban on hunting at the weekend, but in Ile-de-France where she is the head regional council, hunting in public forests is not currently allowed at the weekend.

Far right former TV pundit Éric Zemmour described calls to ban hunting at the weekend and school holidays as a “stupid proposition” and described vegans and animal-rights activists as wanting to “annihilate mankind”.

Jean-Luc Mélenchon, currently the highest polling left-wing candidate in the presidential race, has called for banning chasse à courre and other cruel practices; a ban on hunting at the weekend and during school holidays; a ban on hunting during seasons when baby mammals are still dependent on their mothers; and a ban on the sale of the most powerful hunting weapons.

“Not all traditions are worth keeping,” he is quoted as saying in one interview.

Instead, he is calling for hunting to be banned during school holidays and two days a week – including on Sunday.

He is firmly opposed to all forms of hunting that rely on traps, as well as chasse à courre.

“We need to regulate this activity [hunting] more, it is an emergency,” he said.

As candidate for the once powerful French Socialist Party, Anne Hidalgo, has made very little mention of hunting so far in the campaign and her manifesto does not lay out any policies on the subject.

This is potentially because as Mayor of Paris, she is keen to avoid further accusations of being part of a disconnected metropolitan elite.