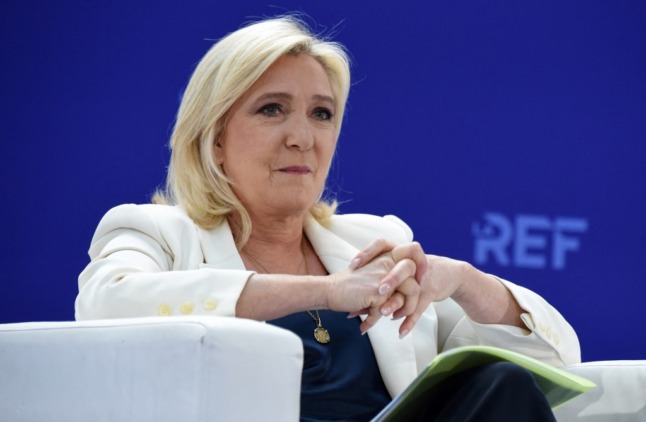 Le Pen’s spokesman on Tuesday confirmed that her campaign was “paused”, but added an important caveat – campaign staff are still employed and still working, but instead of more traditional campaigning, they are all concentrating on trying to find enough parrainages for Le Pen.

Several events and press conferences for the Rassemblement National (National Rally, formerly known as National Front) candidate have been cancelled.

So what does this mean?

In order to get onto the ballot paper for a French election, candidates must meet certain conditions, and one of them is securing support from at least 500 elected representatives in France.

These are known as parrainages and can be secured from any elected official, such as local mayors, MPs, Senators or MEPs. They must also represent a geographical spread across France. You can find a full explanation of the system HERE.

No, she does not and now she has just over a week to find them – the final deadline is Friday, March 4th.

Signatures are submitted to the Conseil Constitutionnel which offers regular updates – at the last count, published on February 22nd, Le Pen had 393 names.

According to her campaign team she has nearer 460 signatures of support, and her spokesman Jean-Lin Lacapelle told French newspaper Le Parisien: “All the staff is on the ground or on the phone to look for our final 40.”

Is it likely that she won’t qualify?

It’s hard to know – Le Pen has frequently complained about the parrainage system, saying that it favours the large established parties and makes things difficult for outsiders. But her own party has existed in some form since the 1970s.

Certainly the recorded numbers of parrainages so far do not reflect polling trends, with Anne Hidalgo and Valérie Pécresse – the candidates of the traditional centre-left and centre-right parties, easily securing their 500 signatures despite, in Hidalgo’s case, polling at around two percent.

Le Pen, on the other hand, has been consistently among the three highest-polling candidates and yet is apparently struggling to get her signatures.

Some see Le Pen’s campaign suspension as mere theatrics to highlight what she sees as an unfair system, while others maintain it is more serious.

Rules stipulating that all names of sponsors must be published are also seen as a disadvantage to the more polarising parties.

Are there any other candidates still short of the 500?

The most recent Conseil Constitutionnel count showed that six candidates were still short.

Among them are TV pundit Eric Zemmour, who has created his own extreme-right movement, and far-left Jean-Luc Mélénchon who also set up his own party, albeit not as recently as Zemmour.

Zemmour and Mélenchon are polling roughly fourth and fifth in the race.

The final deadline to have the necessary 500 parrainages is Friday, March 4th and the full list of candidates who have qualified is published on Tuesday, March 8th.

March 4th is also the deadline for candidates to have formally declared that they will run – something that current president Emmanuel Macron has not yet done, although it is widely expected that he will and he already has his 500 signatures.

The centrist politician François Bayrou, who is not standing for president, says he has created a ‘bank’ of parrainges, which can be offered to candidates who are struggling to qualify.

As of February 22nd, the most recent published data, the Conseil Constutionel recorded the following numbers of parrainages;