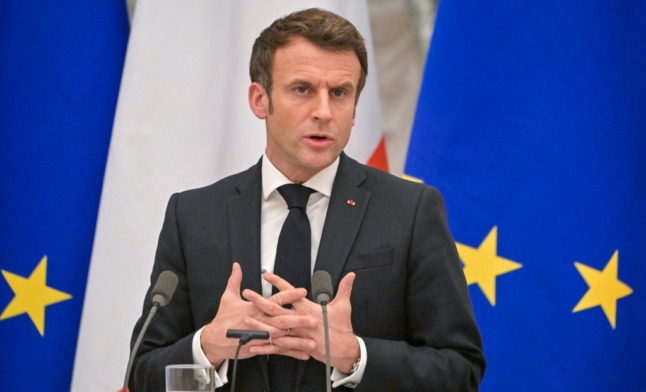 Putin’s speech, in which he recognised as independent two Ukrainian separatist regions, mixed “rigid and paranoid” ideas”, a French presidential official said, saying the Russian leader had “not respected promises made” to Macron.

The official, who asked not to named, said further Russian “military actions” were not to be ruled out and added the EU was preparing a list of Russian entities and individuals to sanction in a “proportionate” response.

“The president condemns the decision…. He is demanding an emergency meeting of the UN Security Council as well as the adoption of targeted European sanctions,” the French presidency said in a statement.

“This is clearly a unilateral violation of Russia’s international commitments and a breach of Ukraine’s sovereignty,” it added.

The statement was issued after Macron chaired a meeting of France’s defence and security council to assess the situation in Ukraine.

Russian President Vladimir Putin earlier recognised the independence of the two separatist regions in eastern Ukraine, defying warnings from the West this could trigger sweeping sanctions.

Macron had engaged in frenetic diplomacy on Sunday in a bid to broker a summit between Putin and US President Joe Biden to ease the soaring tensions over Ukraine which have raised fears of a Russian invasion of its neighbour.

But the idea so far has only met with a lukewarm response from the Kremlin.

There was no mention of continued diplomatic contacts in the Elysee statement.

French officials have previously said that the situation in eastern Ukraine is dangerous but every chance must be used to prevent war.