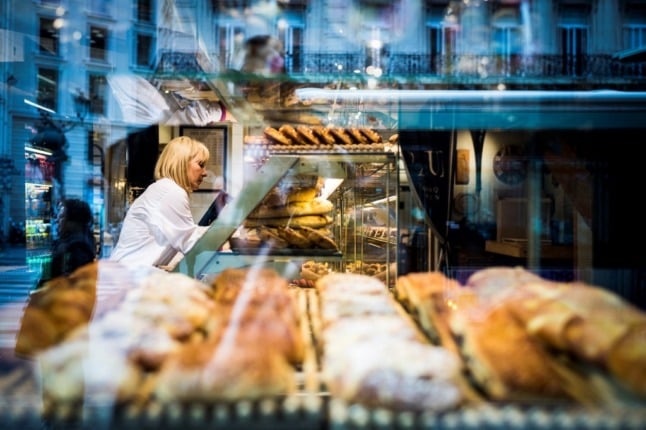 The number of bakers in Paris remained stable in the latest study of the city's commerces. (Photo: Lionel Bonaventure / AFP)

The concept of Paris becoming a leading ’15-minute city’, in which all residents would have everything they needed within a short walk of their home, was an election pledge of the capital’s mayor – now Presidential candidate – Anne Hidalgo when she was up for re-election last year.

The idea is that communities within each arrondissement of the French capital become more ‘self-sufficient’, with grocery shops, parks, cafes, sports facilities, health centres, schools and even workplaces just a walk or bike ride away. This triennial survey of the city’s commerce shows that – in this one particular area important to French people – it already is.

The eighth study into the health of the capital’s shops, cafe culture and restaurants since 2000 found that 94 percent of Parisians live within a five-minute walk from a boulangerie.

In total there were 1,180 bakeries and patisseries in Paris in 2020, a figure that had remained stable over the previous decade after falling in the first 10 years of the 21st century.

More than 1,000 bakeries had been open for at least three years, 91 new business had started, and 94 had closed down.

Bakers have kept their businesses viable over the past decade by offering new ranges, including snacks and sandwiches, the study by the non-profit Atelier parisien d’urbanisme (Apur) found. Nearly 200 of the bakeries in France have also set-up terraces to reap the benefits of Paris’s renowned cafe culture.

The 1,180 bakeries make up nearly two percent of the capital’s 61,541 shops and commercial services – an extremely dense commercial network compared to other cities in France.

On the flipside, the study also found that one-third of butchers had closed in 20 years, with retirement cited as the main reason for businesses closing, along with the rise of supermarkets’ butchery sections and what the report’s authors described as, ‘reduced enthusiasm’ for meat among the population.

It counted 516 dedicated butchers’ shops in the capital in 2020.

Meanwhile, just 80 fishmongers stores were operating in the capital when the survey was carried out – though some 259 stalls operate in Paris’s various twice-weekly open-air markets.

The total number of shops and commercial businesses in Paris dropped 1.9 percent between surveys in 2017 and 2020, having remained stable in the previous three years, with clothes stores, shoe shops, jewellers and wholesale outlets more likely to close, while restaurants, organic stores, health and well-being, and beauty outlets all expanded.

The reports authors said the survey should trends that had started several years ago were continuing on Paris high streets. E-commerce, coupled with the rise of second-hand goods as a result of growing environmental concerns, explains the sharp decline in the number of  clothing, shoes, and jewellery stores.

The development of online shopping and accompanying changes in buying practices also largely explained the virtual disappearance of video shops, as well as the decline in high street banks, temporary employment agencies, travel agencies, and the difficulties the difficulties encountered by bookshops.

The latest survey was carried out in two parts in March and October 2020 during the Covid-19 health crisis.