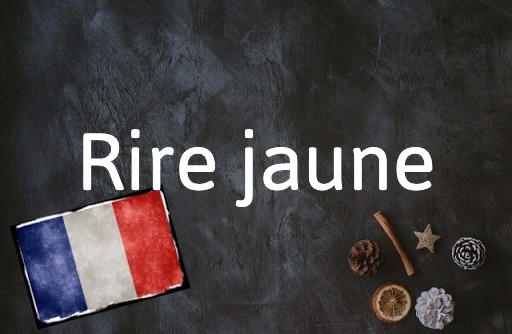 Why do I need to know rire jaune?

Because we’ve all done it at some point.

But a more accurate translation would be forced laughter or a fake laugh.

It is thought to come from the 17th or 18th century – a time when many parts of the world, including France, were going through a hepatitis pandemic. Classic symptoms of this illness include yellowing of the skin and major physical discomfort.

Logically, the pain meant that patients suffering with the condition were not predisposed to having a good time meaning that any laughter was likely forced.

Other theories as to the origins of this expression point towards France’s historical association of the colour yellow with evil, discoloured gold and Judaism – all of which were seen as linked to the notion of duplicity.

Another hypothesis is that that people used to believe that consuming saffron, a yellow spice, could lead people towards madness and uncontrollable laughter.

In the court of Louis XVIII, the full expression used was rire jaune comme farine – To laugh forcibly like flour (flour at the time, was slang for dishonesty).

Whatever the true origins of this expression, you should use it like this:

Il a rit jaune – He gave a forced laugh

C’était un rire jaune – It was a forced laugh

Italians use the expression ridere verde (Green laughter) to mean the same thing.