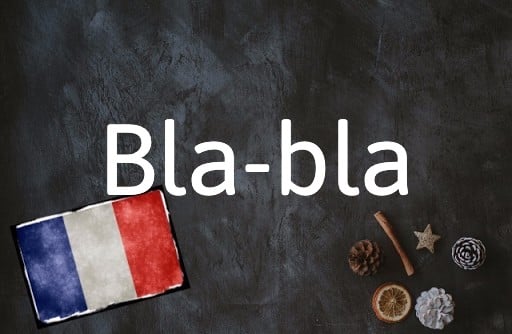 Why do I need to know bla-bla?

Because we all know someone who loves to waffle on.

Bla-bla, sometimes written blabla and always pronounced blah-blah, has a number of definitions.

The first is the similar to that used in English. Bla-bla can be used to mean an incoherent rambling of words that don’t really lead anywhere or carry any weight.

In a similar vein, the term can be used to talk about lies, deceit or misleading language.

Another use of the term bla-bla, which we don’t really use in English, is to mean chitchat or friendly conversation.

A number of French supermarkets have introduced blabla caisses, or chitchat checkouts, where shoppers who want to take their time and have a chat with supermarket staff while paying for their goods are free to do so.

There is a ride-sharing company in France known as Blablacar. On their profile, drivers describe how chatty they are, with bla meaning not very chatty, bla bla meaning sometimes chatty and blablabla meaning very chatty.