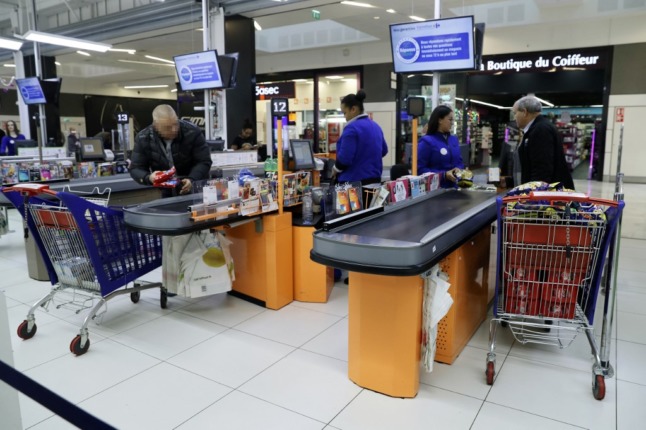 She always picks the same checkout counter, the one where patrons are encouraged to linger and shoot the breeze as they settle up.

Here at the Hyper U store in Nantes, western France, they have an official name for the designated checkout: Bla Bla Caisse (Chitchat checkout).

A blue sign saying “here we take our time” encourages those with time on their hands to linger and talk, and nudging those who don’t to pay at a different counter.

“I talk about everything and nothing, for example about my grandkids coming over for the holidays,” said Gisele, dressed in an elegant blue jacket with a fur collar and clutching a red bag, a baguette tucked under her arm.

Except for school breaks when she has company, Gisele’s daily Hyper U trips are the only chance to see people, she said, so “dressing up” for the occasion makes sense.

“I used to play bridge at a club, but because of Covid I don’t really feel like going anymore,” she said.

Behind the checkout counter Rozenn Charpentier, 52, scans groceries while listening to a customer in her 60s complaining that she was given a ticket although she “wasn’t parked that illegally”.

“At the ‘bla bla’ counter I feel free to start a conversation, people are usually happy to talk,” she said.

The store’s cashiers take turns at the chitchat counter, on a voluntary basis.

The supermarket opened the slow checkout two years ago to “revive human contact” with customers after the store’s six self-service counters went into service, said Regis Defontaine, head of communication and events at the supermarket.

“There’s nothing particularly original about customers and sales staff having a conversation. But these days we’re losing that social link and some say that’s a pity. This is not Amazon,” he said, in reference to the US online retailer.

Customers who pick the chatting queue are typically elderly, often live alone and have all the time in the world, he said.

Other national hypermarket brands, like Auchan and Carrefour, now have similar setups.

“Some clients like to take their time and talk,” said Pierre-Emmanuel Vasseur, the manager of the Carrefour Angers Grand Maine store.

Here, it’s been just over a week since the first chitchat checkout opened, with customers both curious at, and mystified by, the novelty.

“What are we supposed to talk about?” asked one man in his 60s with well-groomed grey hair and an impeccable shirt.

A woman inquired eagerly: “Do we have a time limit?”

“Since I’m supposed to chat with you, let me say that I find you charming,” a man said to the young cashier.

Just behind him, another client has second thoughts: “I’m not a good talker,” he said, before pushing his trolley in the opposite direction.

No such hesitations for Marie-Luc Lefeuvre-Justeau, a 82-year old regular, who says she likes to chat when she goes shopping.

“The problem is that usually somebody will complain because they’re in a hurry,” she said. “But here, we don’t bother anybody.”

What are my rights if I am arrested or imprisoned?

If you are arrested you have the same rights as a French citizen to legal advice, phone calls, bail and a full trial – full details HERE.

There are some extra things to be aware of however;

Once arrested you have the right to an interpreter during police interviews.

You have the right to call your Embassy, although the help the Embassy can offer you is much more limited than many people think.

If you are released while awaiting a court hearing you will usually have to hand over your passport and undertake not to leave the country. If you are not a French resident, the judge can assign you a residency address in France.

If you are found guilty and imprisoned in France you maintain several rights, such as the right to vote (if you have French citizenship). France’s interior ministry has a handout detailing these rights, HERE.

Can I appeal against my sentence?

Yes, you have the right to appeal a court’s decision.

Keep in mind that this can be a lengthy process with very specific deadlines – and it can go either way, so you risk a sentence being increased.

If you are acquitted in court,  French law also allows for the prosecution to appeal against your acquittal.

I am the victim of a crime, what are my rights?

In France, the role of the state and the prosecutor is to protect the peace, this means that if someone commits a crime against you, it is up to the state to decide whether to move forward with criminal proceedings.

It’s not up to the victim to decide whether or not to press charges.

Conversely, if the state chooses not to go ahead with criminal proceedings, but you (the victim) want them to press charges, you have the right to appeal against their decision to drop the case.

Can I be expelled from France for committing a crime?

Yes, although this is generally reserved for people who have committed serious crimes such as violent crime, drug-trafficking or terror offences.

If you have been jailed for a serious crime in France you can be served with an ‘interdiction du territoire français‘ – a ban from French soil – on your release. These are reserved for the most serious offences and simply being incarcerated does not necessarily lead to expulsion.

If you are a full-time resident in France but not a French citizen, then being convicted of a crime can mean that your visa or residency card will not be renewed. This is again usually reserved for people who have committed very serious crimes, but in certain circumstances residency can be withdrawn for less serious offences such as driving offences or begging.

READ ALSO What offences can lose you the right to live in France?

If you have French citizenship it’s virtually impossible for your to be expelled from France although in some rare cases – usually connected to terrorism – citizenship of dual nationals can be revoked.

What are the rules for minors?

Minors in the French legal system have some specific rights. The EU has laid out the specific rights of minors, which apply in France as well, and apply from the time of arrest.