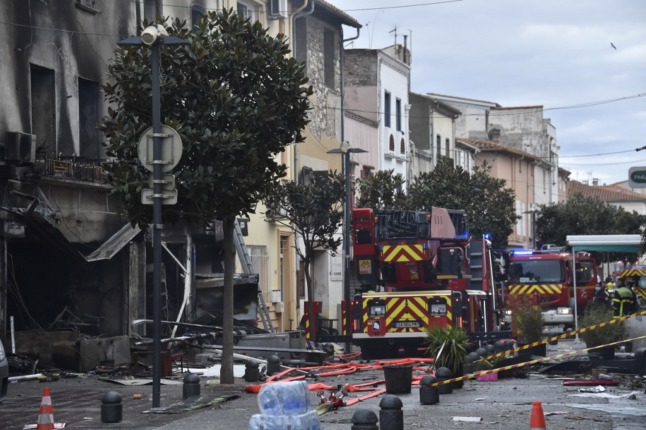 Fire crews at the scene of an explosion in Saint Laurent de la Salaque. Photo by RAYMOND ROIG / AFP

The explosion happened at around 1.30am in a building in the small town of Saint-Laurent-de-la-Salanque, in the south-west département of Pyrénées-Orientale, close to Perpignan.

The blast was followed by a fire, which spread to neighbouring buildings, in total 25 people were evacuated and at least seven people have died.

According to local radio station France Bleu, the explosion occurred on the ground floor of the building, in a grocery-sandwich shop in the town, which is close to Perpignan. 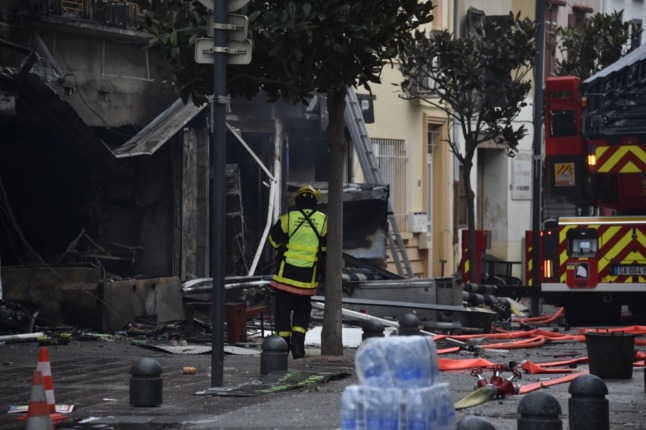 A firefighter stands near to debris and burned houses after an explosion in Saint Laurent-de-la-Salanque. Photo by RAYMOND ROIG / AFP

Gas cylinders were found in the vicinity of the affected building, but it is not yet clear whether they were the cause or whether they aggravated the explosion.

Interior minister Gérald Darmanin tweeted on Monday: “An explosion followed by a fire has killed at least 7 people in the département of Pyrénées-Orientales.

“I am interrupting my trip to Montpellier to go to the scene.

“I give my full support to the State services mobilised and to the inhabitants. My thoughts are with the victims and their families.”

Residents reported hearing a blast around 1.30 am. “I heard a very loud explosion, then I saw huge flames,” neighbour Nadine Bret, 59, told AFP.

“The buildings were ravaged by the flames. It was total panic.”

She said building work had been going on in a fast-food restaurant on the ground floor of one of the buildings on Sunday.

Nearly 100 firefighters were mobilised overnight and on Monday crews continued to search for potential victims iin two small blocks of flats left unstable by the damage from the blaze.

One man in his 30s was taken to hospital in a critical condition after leaping from a second-storey window to escape the fire.

An investigation has been launched into the cause of the explosion.