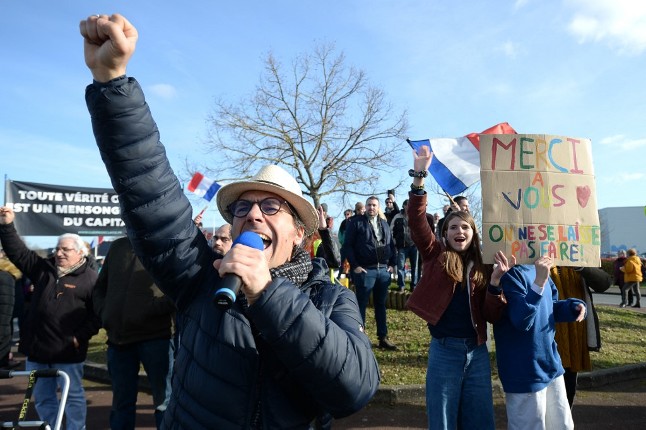 Nearly 7,200 police and gendarmes “are being deployed over the next three days to enforce the ban on vehicle convoys,” Paris police headquarters said.

The prefect of the Paris police, Didier Lallement, said they had created a temporary car pound which, together with dozens of tow trucks, “will … put an end to any blockage”.

On Saturday morning, Paris police posted pictures of vans from the CRS riot police on Twitter, in a not-so-subtle message to protestors of what is likely to happen if they mount a blockade.

Police had on Friday night showed off their anti-blockage arsenal on Twitter, publishing photographs of loader tractors for the removal of barricades as well as trucks equipped with cranes or water cannon.

Gendarmerie armoured vehicles have also been deployed in the streets of the capital for the first time since the “yellow vest” protests at the end of 2018. Prime Minister Jean Castex vowed to remain steadfast.

“If they block traffic or if they try to block the capital, we must be very firm about this,” he insisted on France 2 television channel on Friday.

Hundreds of cars, motorhomes and vans from Lille, Strasbourg, Chateaubourg and elsewhere stopped Friday evening at the gates of Paris, but a police source said no convoy had entered the capital.

They are demanding a withdrawal of the government’s vaccine pass, which is required for access to many public spaces, and more help with their energy bills.

“People need to see us, and to listen to the people who just want to live a normal and free life,” said Lisa, a 62-year-old retired health worker who joined a convoy of more than 1,000 vehicles leaving Chateaubourg in the western Brittany region early Friday.

Like other protesters, Lisa has been active in the “yellow vest” movement that erupted over a fuel tax hike before becoming a platform for other complaints against President Emmanuel Macron.

Just two months ahead of presidential elections and with the government desperate to avoid violent scenes in the capital, Macron said Friday he understood the “fatigue” linked to the Covid-19 pandemic.

“This fatigue also leads to anger. I understand it and I respect it. But I call for the utmost calm,” he told the Ouest-France newspaper.

Police estimated 3,300 vehicles were involved in the various convoys by Friday afternoon. Paris police banned the gathering because of feared “public order disturbances” and said protesters who tried to block roads would face fines or arrest.

The order prohibiting the assembly of convoys was upheld on Friday by the courts, which rejected two appeals.

“It’s a betrayal. The basis of the order is not respectful of the law, of the freedom to demonstrate,” anti-vaccine and “yellow vest” activist Sophie Tissier told AFP.

“The right to demonstrate and to have an opinion are a constitutionally guaranteed right in our republic and in our democracy. The right to block others or to prevent coming and going is not,” the prime minister said.

Refuting any desire to block the capital, the demonstrators were hoping to swell the ranks of the regular Saturday protests against the government’s vaccine pass.

“It’s important that we don’t interfere with other people on the roads,” said one activist, Robin, on his way from Illkirch-Graffenstaden in the eastern Alsace region. “That way we’ll keep the population on our side, like they did in Canada.”

Some then want to travel on to Brussels for a “European convergence” of protesters planned there for Monday.

Phil, a 58-year-old on his way by truck from Brittany, said his refusal to get vaccinated had created “upheaval” in his family and work relations.

“When you join a demonstration you feel less alone,” he told AFP.

The government has expressed some sympathy for the protesters, with spokesman Gabriel Attal attributing their anger to “fatigue and weariness” after long-lasting Covid restrictions. The government also announced Friday a further easing of Covid rules.

There are several demonstrations taking place across France on Saturday, but this union-organisation protest had been expected to be the largest.

Jointly organised by the League of Human Rights with several unions (CGT, FSE, FSU, FAGE, Unef) the protest was organised to express anger over the presence of far-right leader Marine Le Pen in the second round of the presidential election.

Organisers had also called for demonstrations across France. 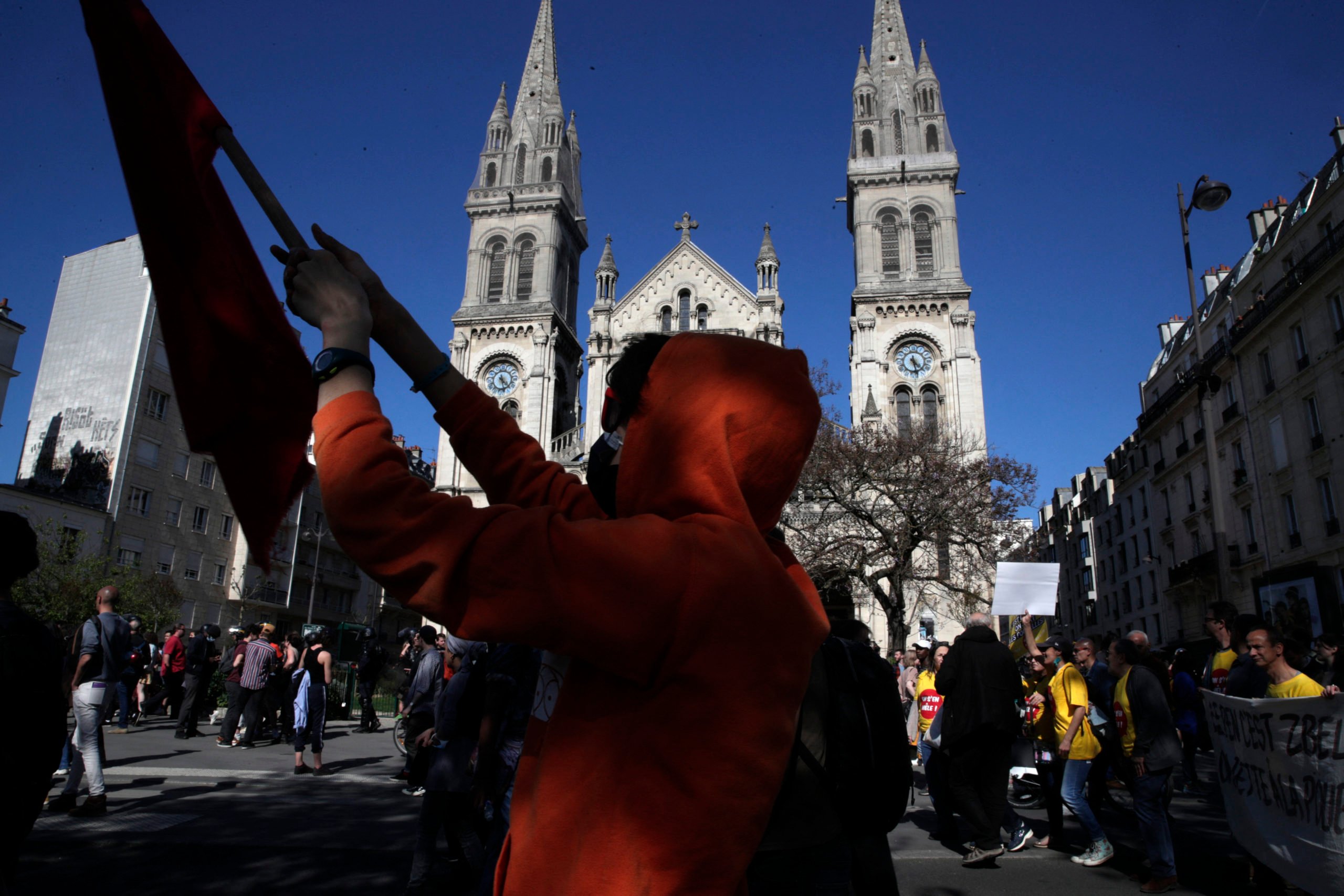 A protestor waves a flag as he marches with others during a demonstration ‘against racism and fascism’ in Paris on April 16, 2022. (Photo by GEOFFROY VAN DER HASSELT / AFP) 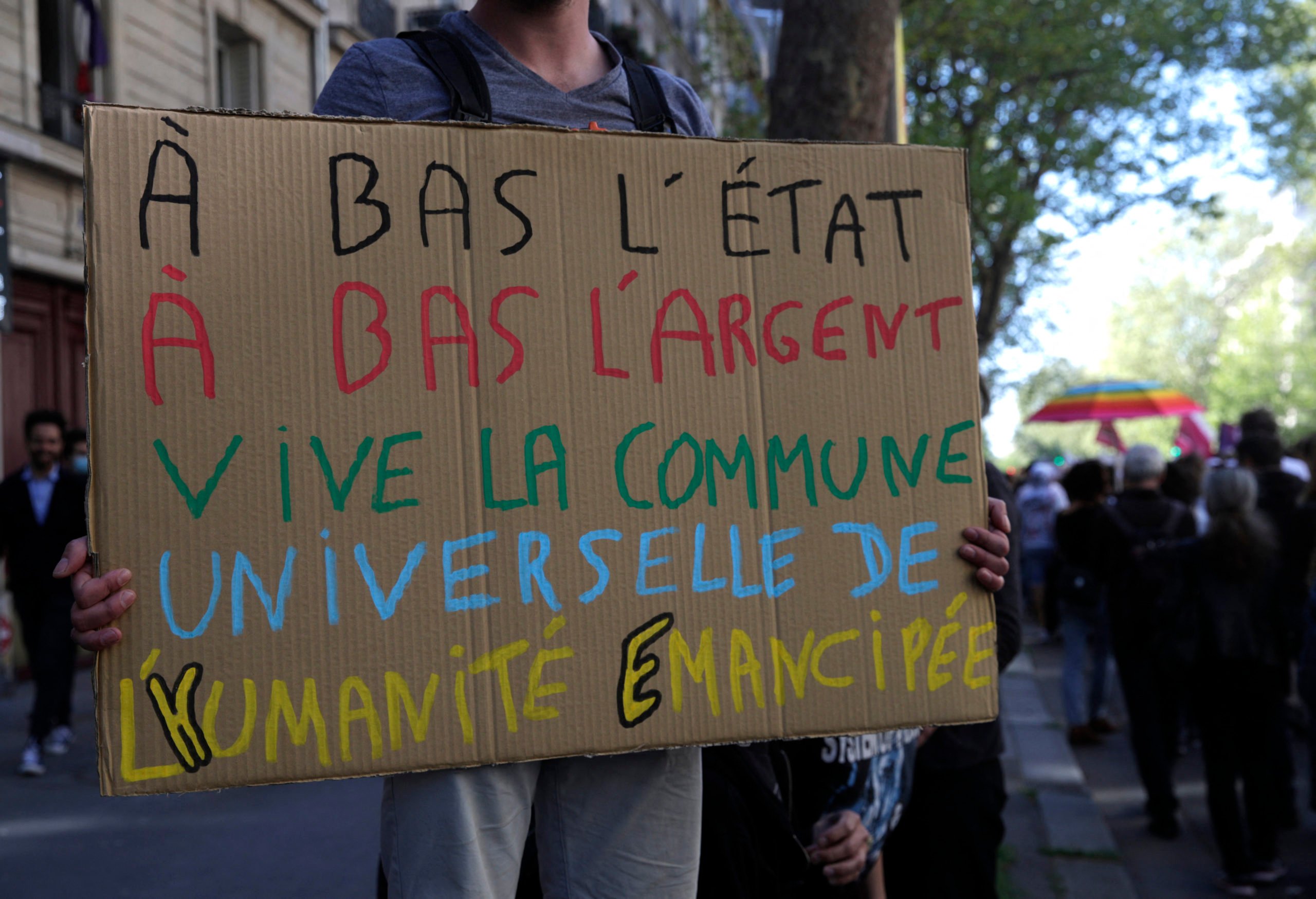 A protestor holds a placard which translates as ‘down with the state, down with money, long live the commune, universal humanity and emancipation’ during the demonstration (Photo by GEOFFROY VAN DER HASSELT / AFP) 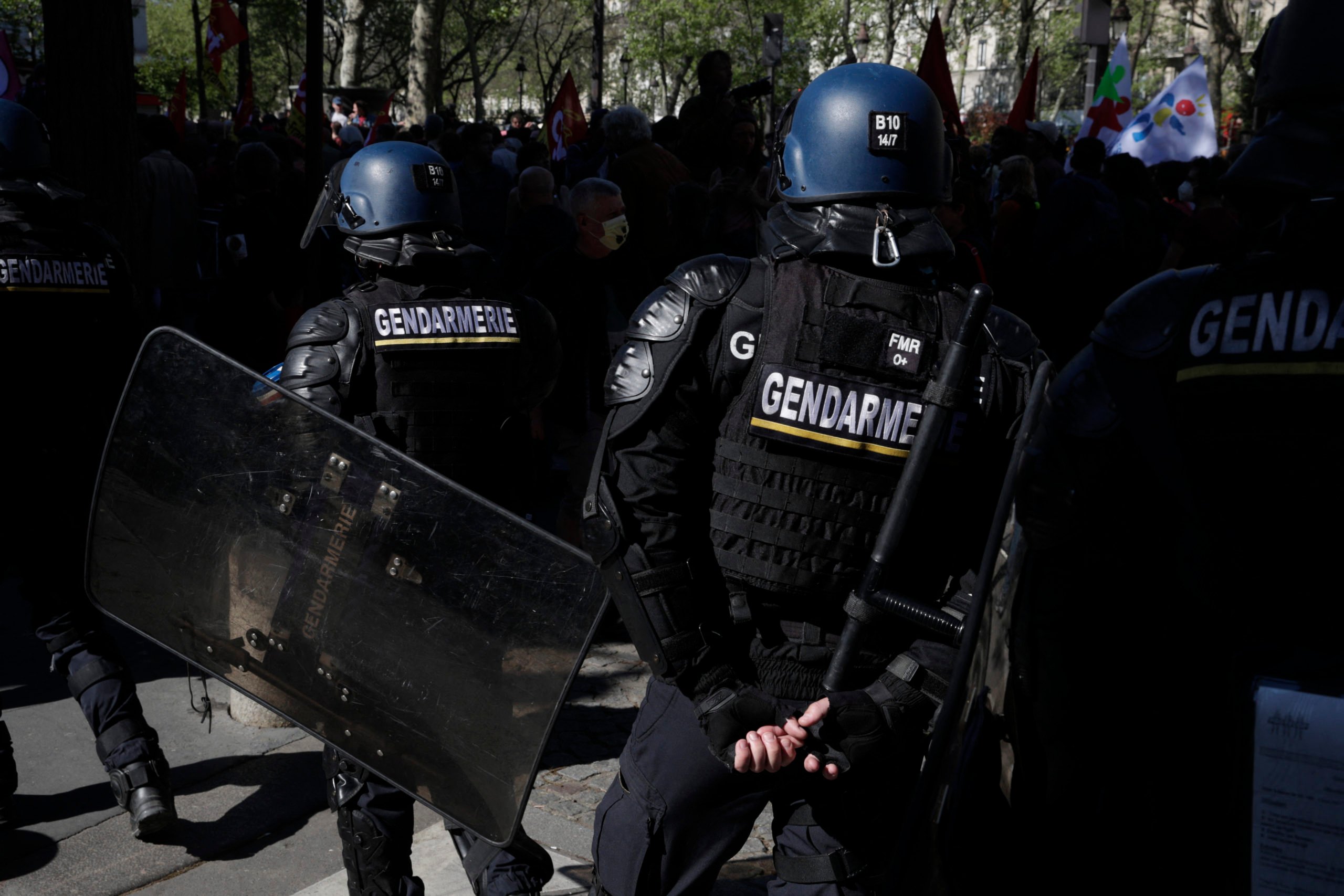 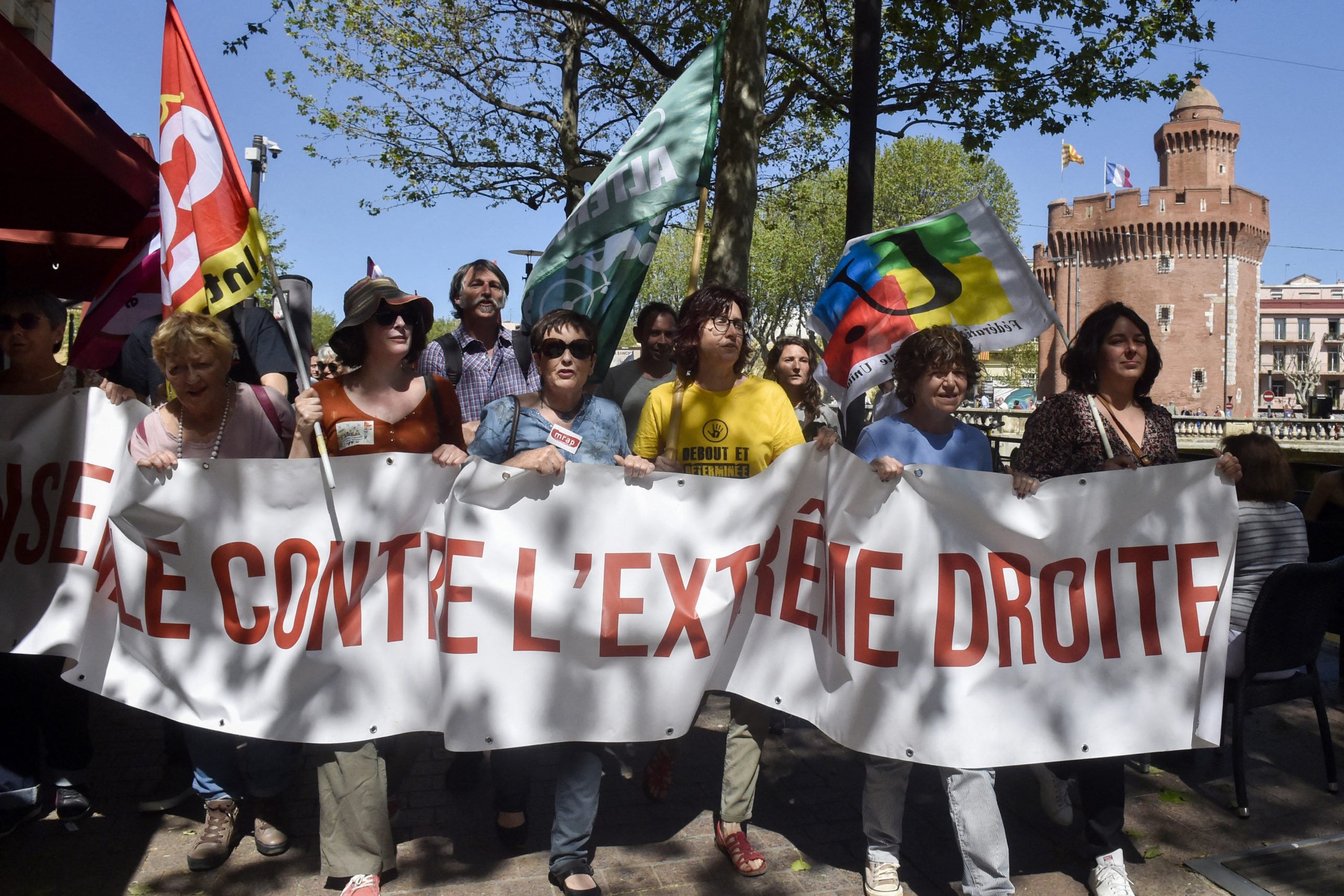 Protestors hold a banner reading ‘Against the far-right’ during a demonstration against racism and fascism in Perpignan, southern France, on April 16, 2022. (Photo by RAYMOND ROIG / AFP) 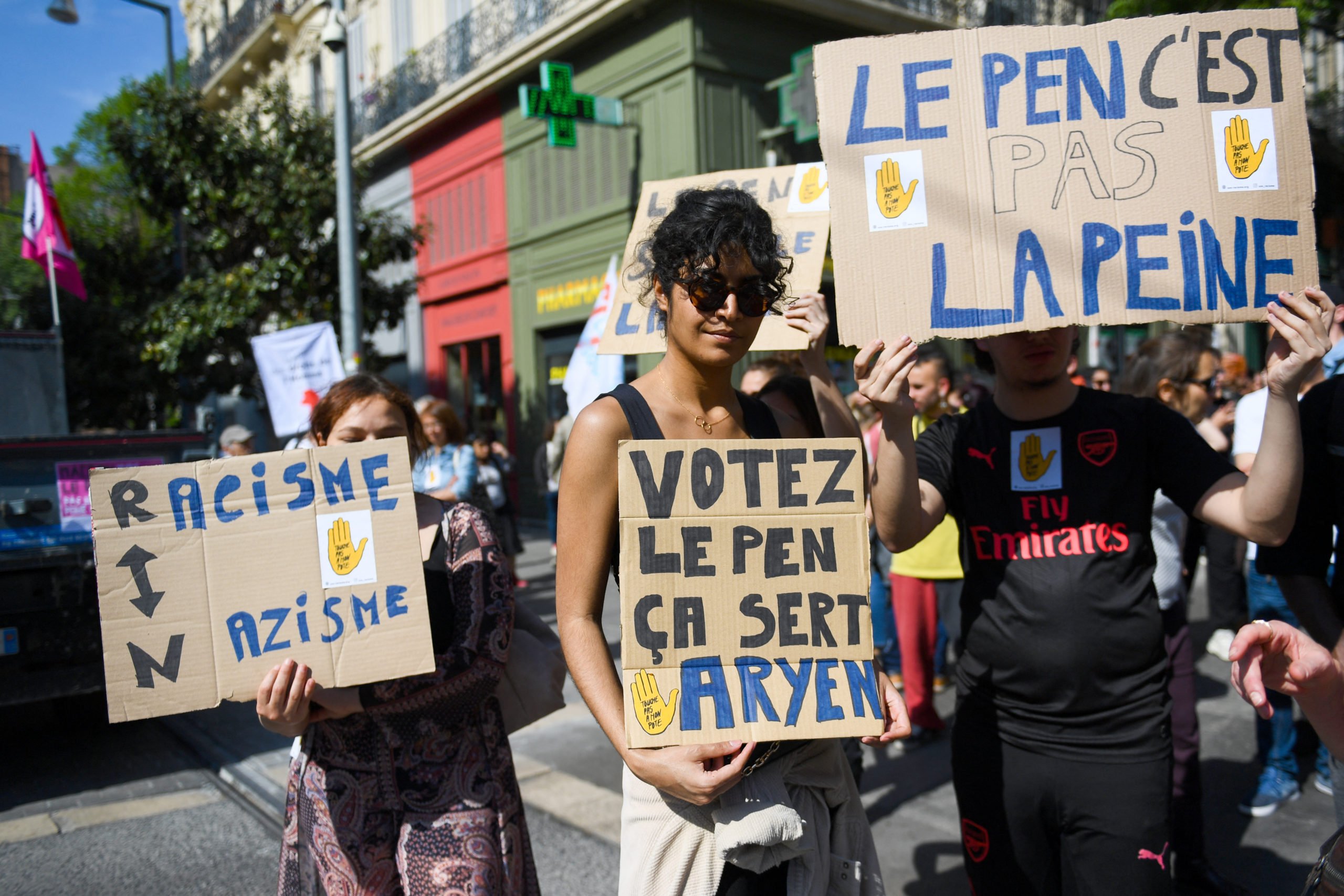 A protestor (R) holds a banner reading ‘Voting for Le Pen is not worth it’ during a demonstration ‘against racism and fascism’ near Marseille’s prefecture, on April 16, 2022. (Photo by CLEMENT MAHOUDEAU / AFP) 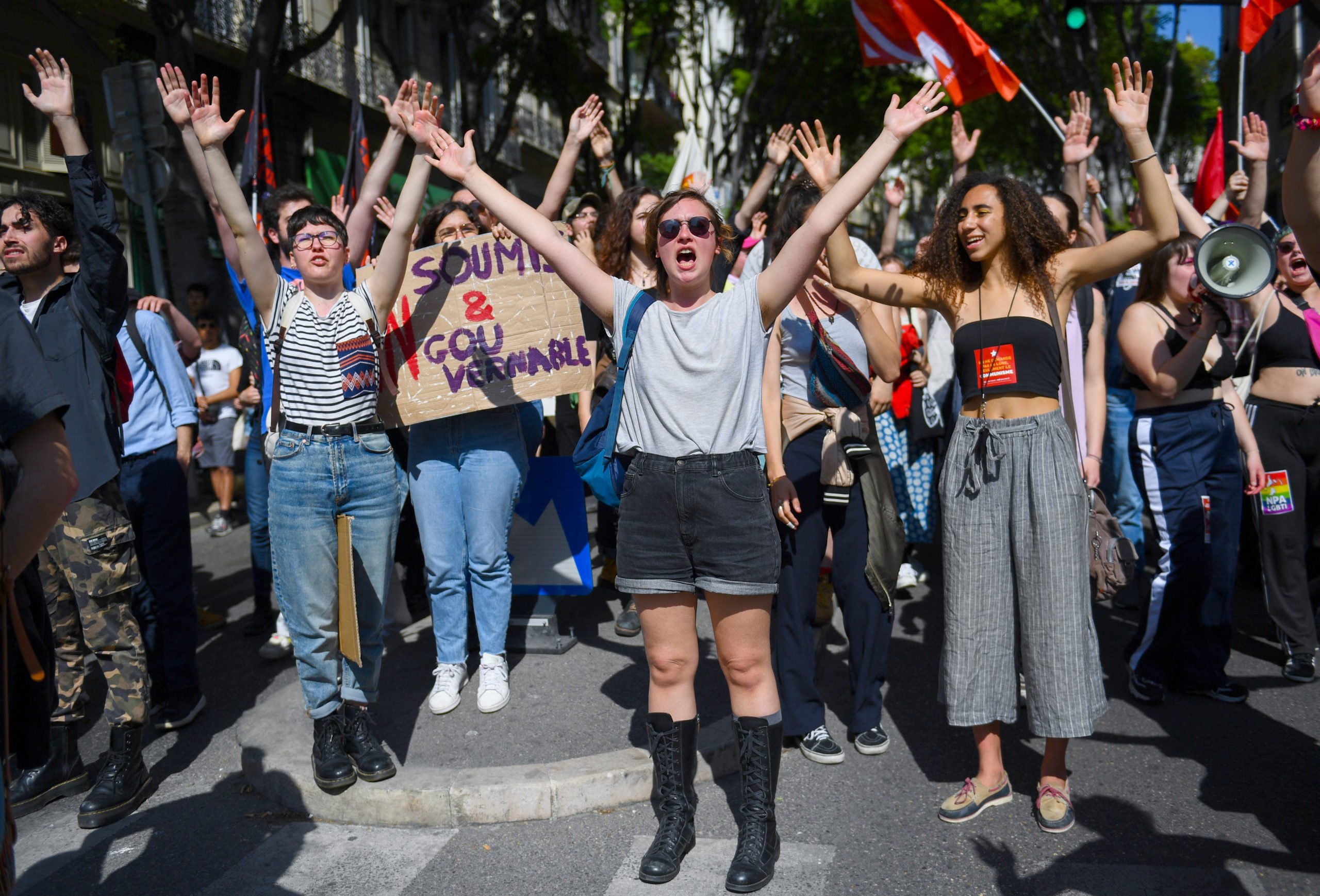 Protestors shout slogans during the demonstration in Marseille. (Photo by CLEMENT MAHOUDEAU / AFP) 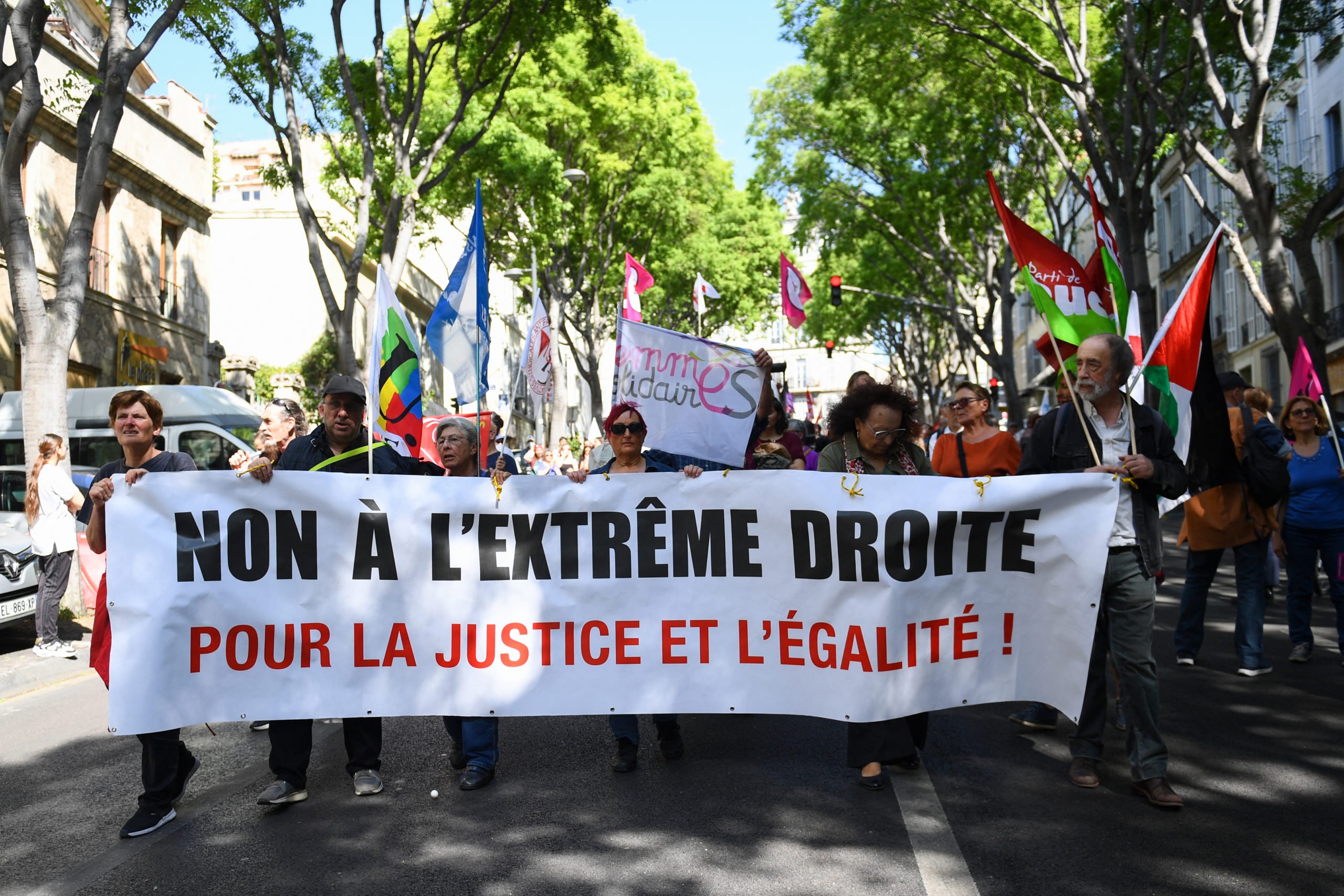 Protestors holds a banner reading ‘no to the far-right, for justice and equality’ in the demonstration in Marseille. (Photo by CLEMENT MAHOUDEAU / AFP) 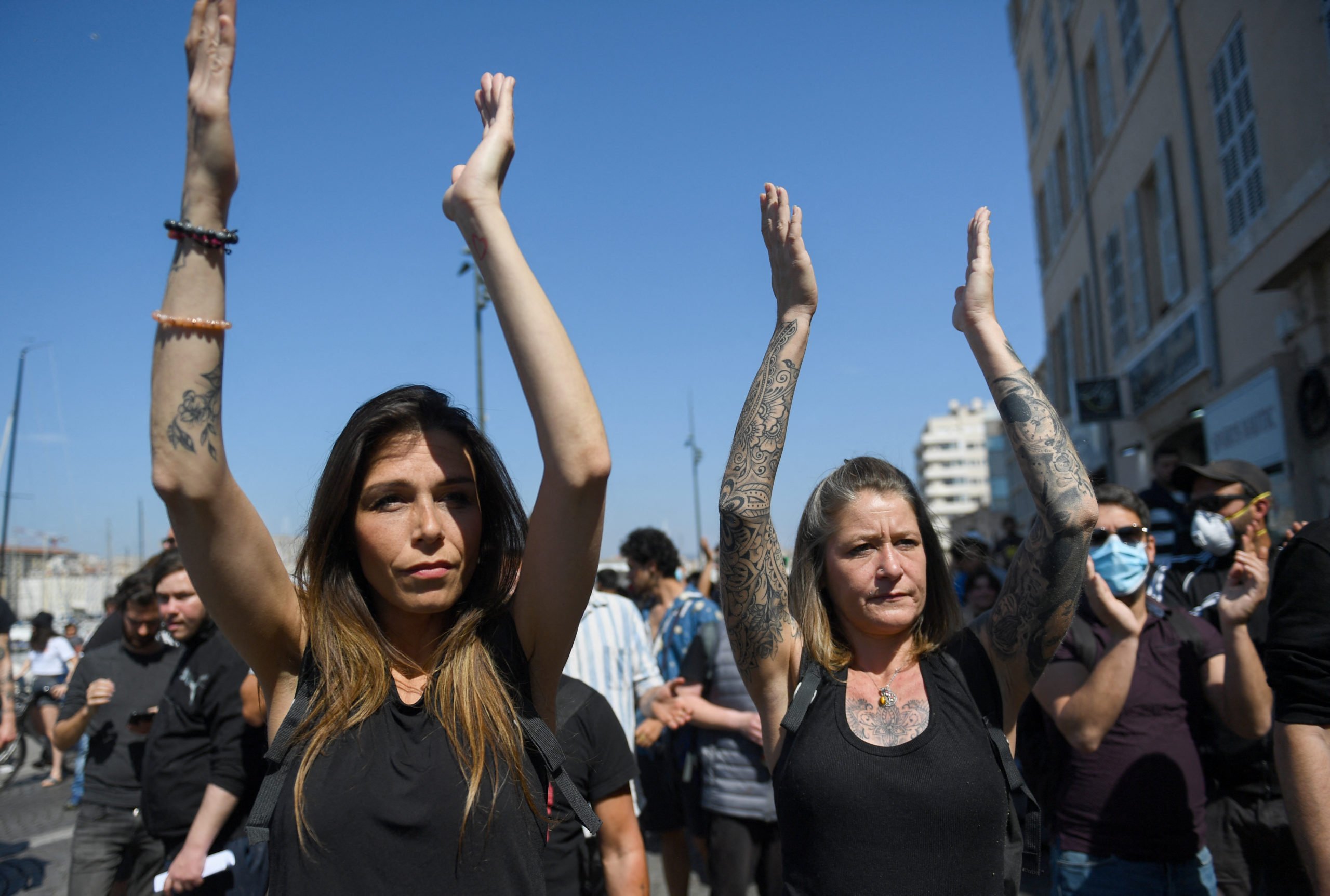 Protestors shout anti-fascist slogans in front of riot mobile gendarmes during a demonstration at the Vieux Port in Marseille, on April 16, 2022. (Photo by CLEMENT MAHOUDEAU / AFP)
SHOW COMMENTS