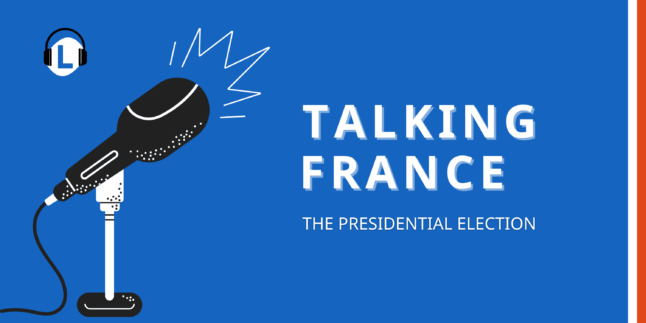 This episode gives you a taster of what we’ll be covering when Talking France becomes a weekly feature from March 8th.

You can listen to it here (scroll down) or on Spotify or Apple – search The Local’s French election podcast.

We’ll aim to explain the upcoming French presidential election for a non-French audience – how the political system works, who the candidates are and what they stand for, the hot-button issues in France and of course the crucial question; who will win?

We’ll speak to experts including John Lichfield who explains in our pilot episode exactly why this election matters so much.

“In a sense it’s an election not only about the future of France but the future of Europe – you cannot imagine the European Union surviving if either of the far right candidates Marine Le Pen or Eric Zemmour were elected,” he says.

We also look at the tradition of the front républicain in French elections and ask John whether it will hold up in 2022.

You can also find it on Spotify here Apple here or by searching The Local’s French Election’s Podcast.

We hope this pilot episode gives you a taster of what’s to come. Please give us your feedback in the comments section below and let us know what you would like to hear in forthcoming episodes.

We’ll be back from Tuesday, March 8th with a weekly episode of Talking France, right through until the week after the election’s second round on April 24th.

We’ll also be answering questions from listeners on any aspects of France, its politics and elections, so if you have something you have always wanted to know or a question you’d like to put to John then email us on [email protected]

You can also keep up with all the election latest in our 2022 Presidential election section HERE.