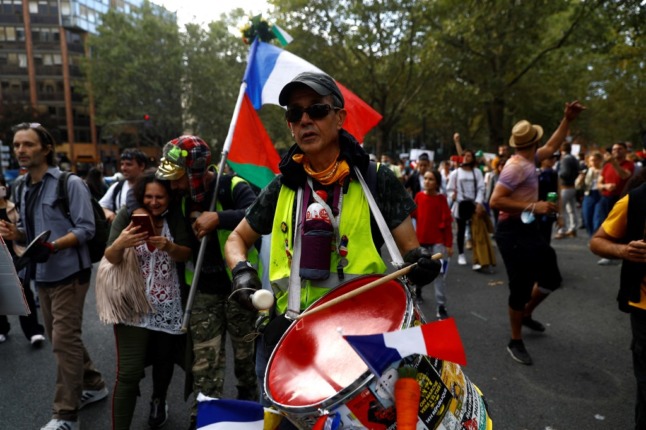 A protestor marches against Covid restrictions in the French capital. (Photo by Sameer Al-DOUMY / AFP)

Paris police said on Thursday they would ban the so-called “freedom convoys” inspired by a truckers’ protest against coronavirus restrictions that has paralysed the Canadian capital Ottawa.

“There will be a special deployment… to prevent blockages of major roads, issue tickets and arrest those who infringe on this protest ban,” the city’s police force said in a statement.

The Convoi de la liberté (freedom convoy) is organised by several groups who are opposed to Covid-related health measures such as vaccine passes and mask mandates.

The force recalled that people blocking roads faced up to two years in prison, a fine of €4,500 and a three year driving ban.

Paris’ move comes after a number of convoys of cars, vans and motorbikes set off from around France on Wednesday, inspired by the two-week blockade of central Ottawa by truckers angry at testing and vaccine requirements for crossing the border with the US.

Eyhande Abeberry, 52, a participant at the send-off in the southern city of Bayonne, told AFP that the government’s vaccine pass for access to much of public life was “an aberration”.

Government spokesman Gabriel Attal said he recognised the public’s “weariness” with infection control measures, but insisted that France had been among the European countries with “the fewest restrictions that infringe on citizens’ freedom”.

More than 300,000 people joined a Facebook group promoting the event. It is unlikely that all of these people will physically take part.

Recent protests against the vaccine pass and other health measures, some of which were organised by ‘yellow vest’ groups, have been attracting only small numbers.

Far-right presidential candidate Marine Le Pen said that she “understood” the protesters’ goals, saying that it was “another form of the yellow vests” demonstrations against President Emmanuel Macron that rocked France in 2018.

Organisers hoped to launch five convoys from various regions of France, which would converge in Paris on Friday. From there, the convoys were supposed to set off for Brussels, aiming to arrive on Monday, February 14th. 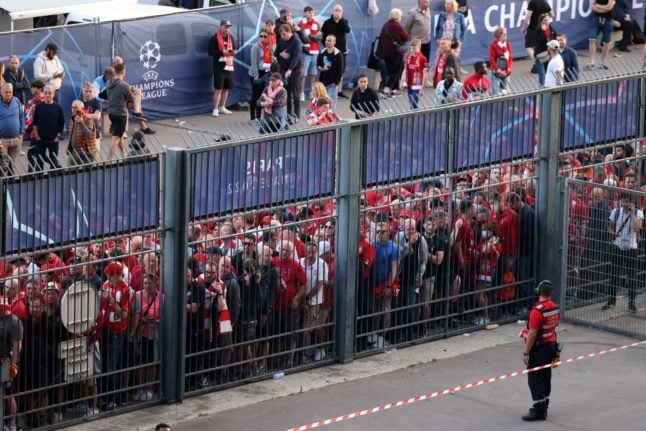 The match between Real Madrid and Liverpool FC eventually got underway at 9.37pm, more than half an hour late, after chaotic scenes at the entry gates to the Stade de France in Saint-Denis, just outside Paris.

At the slated kick-off time of 9pm thousands of fans were still outside, with some having been queuing to get in for for more than two hours.

Problems are reported to have begun several hours before kick-off, with a pre-check of tickets and bags at the exit of the RER station at Stade de France turning into a bottleneck.

As the crush increased, the check was eventually waived, but many of the entry gates to the stadium remained closed.

Police then staged an intervention, including using tear gas, at the stadium after some fans tried to force their way into the ground, telling French media that the measure was “to repel attempts to intrude into the stadium”.

In a statement released just as the match ended, organisers UEFA blamed “Liverpool fans who had purchased fake tickets” for the chaos.

The statement read: “In the lead-up to the game, the turnstiles at the Liverpool end became blocked by thousands fans who had purchased fake tickets which did not work in the turnstiles.

“This created a build-up of fans trying to get in. As a result, the kick off was delayed by 35 minutes to allow as many fans as possible with genuine tickets to gain access.

“As numbers outside the stadium continued to build up after kick off, the police dispersed them with tear gas and forced them away from the stadium.

“UEFA is sympathetic to those affected by these events and will further review these matters urgently together with the French police and authorities, and with the French Football Federation.”

Several videos posted on social media showed fans either climbing over fences or trying to force their way into the stadium.

However Liverpool fans who had tickets were caught up in the chaos, with police spraying tear gas at fans waiting outside – including children.

An AFP journalist on the scene reported that about 20 succeeding in getting into the ground.

Many of the seats in the official Liverpool end of the ground remained empty 25 minutes after the scheduled start time. Kick-off was delayed twice, with an in-ground announcement saying it was down to “fans arriving late” while UEFA said they delay was “due to a security issue”.

British football pundit Gary Lineker was among those stuck in the crowds outside, tweeting that he was “finding it impossible to get into the ground”.

Finding it impossible to get in the ground. This appears to be very dangerous. Absolute carnage.

He tweeted: “Thousands of British ‘fans’, without tickets or with fake tickets have forced the entrances and, sometimes, behaved violently towards stewards. Thank you to the many police forces mobilised tonight in this difficult context.”

In a statement, the Paris police chief also blamed fans with no tickets or fake tickets for the chaos, claiming that their interventions had been to “restore order and remove those causing a disturbance”.

Paris police came in for sharp criticism for their actions, especially the use of tear gas on fans outside the grounds.

The statement from police said that “fans were dispersed without difficulty”, adding that their had been no major incidents in either of the two fan zones.

As estimated 60,000 Liverpool fans had travelled to Paris, most without tickets. Each club was allocated just 20,000 tickets for the 80,000-seater Stade de France.

The city of Paris had set up fan zones for fans without tickets – in Vincennes for Liverpool supporters and Saint-Denis for Real Madrid supporters. Both of these reached their full capacity before kick-off.

The match ended in a 1-0 win for the Spanish team.