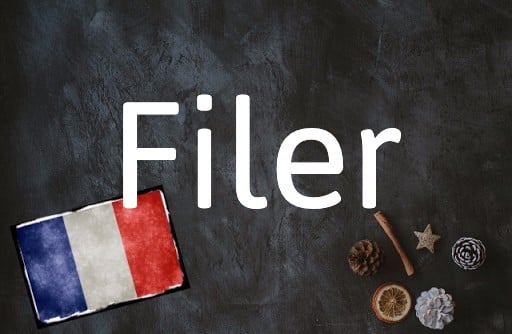 Why do I need to know filer?

Because this word is used in a wide range of settings and it is best to avoid confusion.

Formally, it is used to talk about spinning a material into thread – this is because fil means thread.

In a similar vein, it is the verb used to describe a spider spinning its web.

Filer is also used to talk about policemen, detectives and private investigators shadowing or inconspicuously following someone at a distance. It is thought that this is because this involves weaving through a crowd and maintaining a ‘thread’ to the target.

L’enquêteur a filé le suspect, puis il l’a perdu de vue – The investigator tailed the suspect, then he lost sight of him.

On the other end of the law-and-order spectrum, filer can be used to talk about making a quick getaway.

It is not just to talk about escaping after committing a crime however. It can also be used to describe any instance when you leave a location.

The word filer is often also used in a very slangy context to talk about giving something.

What is a filer à l’anglaise?

You may have heard of a ‘French exit’ or ‘French leave’ – the idea of slipping away from a location or event without saying goodbye or letting anyone know.

Well in France, it should come as no surprise that this is referred to as filer à l’anglaise (to leave the English way).

Other countries are divided on whether to attribute an unannounced departure as typically French or typically English.

In Portuguese, German and Spanish, people refer to the French exit.