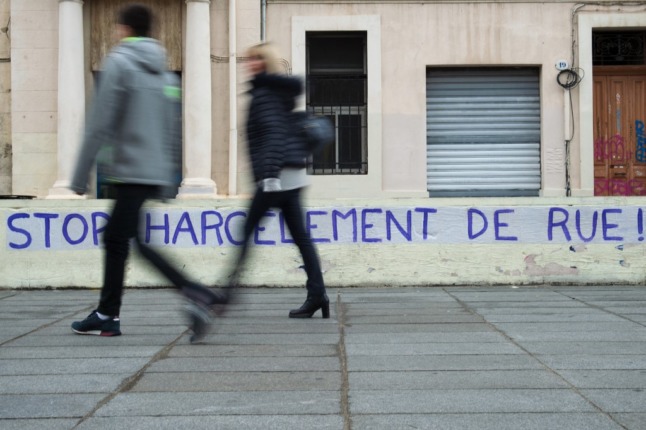 "Stop street harassment" is an apparently simple message, but it is not getting through (Photo by Clement Mahoudeau / AFP)

France’s Interior Ministry has announced a collaboration with the street safety app Umay and retail chain Monoprix to highlight and locate ‘safe places’ for women in towns and cities across the country.

According to an Ipsos survey, 81 percent of women in France have been victims of sexual harassment in a public space.

The smartphone Umay app features an alert button in case of harassment, and safe places are identified on a street map of the local area. All police stations and gendarmerie brigades will be listed as safe places on the map, as will all Monoprix and Monop’ stores.

Police and other agencies will be able to cross-reference reports made via the app with their own data, using it to help protect women in the street more effectively, after figures showed just two percent of women filed complaints for sexual harassment in the street.

The Ministry will help the Monoprix group, so that any victim of on-street harassment who takes refuge in one of its stores will be properly and suitably cared for.

“This mobilisation for women’s safety is a revolution,” said citizenship minister Marlène Schiappa. “We want every woman to be able to take refuge in a safe place wherever she is in France.”

Jean Paul Mochet, President of the Monoprix group, said: “The Monoprix group is particularly proud to work hand in hand with the Umay application and the Ministry of the Interior by putting its network of stores at the service of safer streets in the 250 cities where we are established.”

President Emmanuel Macron last month said he wanted to see fixed fines for on-street sexual harassment increase to €300. Street harassment has been punishable since the summer of 2018 with a fine of €90, and up to €1,500 if the victim is under 15 years old.

Since the loi Schiappa on sexist and sexual violence came into effect, about 3,500 fines for sexist insults have been imposed in total, according to latest figures.