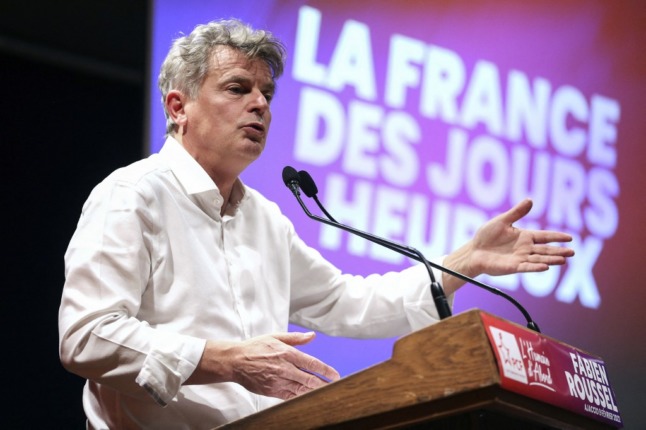 1 It’s happy to be back – Parti Communiste français (PCF) member Fabien Roussel, 52, is the first Communist candidate to compete in a presidential campaign in 15 years, with the party opting to back hard-left firebrand Jean-Luc Mélenchon in the past two elections instead of fielding a candidate of its own.

To illustrate its newfound optimism, the party has picked the most upbeat slogan in the campaign so far: ‘Happy Days for France’ – a reference to a French Resistance manifesto during World War II, from which it emerged as France’s biggest party.

Polls show Roussel, an MP, still languishing in the low single digits, a far cry from the Communists’ heyday in which they polled over 21 percent in the 1969 elections – but a new tone is clear.

2 It never went away in many places – although 2022 marks a return to national politics, the Communist party has remained active on a local level.

There are currently 600 Communist mayors and many more local councillors. Areas including the Paris suburbs of Montreuil and Bobigny and towns like Avion in the former industrial areas of the north east are run by Communist mayors.

However its current strength is a far cry from the post-war years when the inner suburbs of Paris were known as the ceinture rouge (red belt) because of the strength of the communist party in those areas.

3 It runs a very popular annual festival with excellent snacks –  The annual Fete de l’Huma, named after the communist newspaper L’Humanite, is France’s biggest festival with hundreds of thousands of visitors for days of concerts and other events.

The festival is open to all, and many non-Communist leftists attend for the mixture of politics, entertainment, new ideas and street food stalls.

“There is still a cultural link, a kind of nostalgia for the Communist Party”, Frederic Dabi, a political analyst who heads up the Ifop research institute, told AFP.

“Many people accept communists as decent, committed people”, he said, even though they also mostly reject communist ideology.

4 Its candidate likes nationalised industries, nuclear power and cheese – “We need to talk about happiness and how change is possible, after being told for years by various governments that we need to make more efforts, that we need to tighten our belts,” Roussel told AFP.

During the Covid crisis, the state’s willingness to mobilise huge sums to save the economy showed that “there is plenty of money around”, Roussel said.

But instead of “that money going to multinationals”, he said, “we want it to be used in the service of the people” – mostly in the shape of pay rises for low-income professions including nurses and teachers.

True to dogma, Roussel’s programme calls for the nationalisation of big banks – including BNP Paribas, the EU’s biggest – and of energy giants TotalEnergies and Engie.

But he is just as relaxed about backing nuclear power, defending the police force or supporting hunting – all red rags for other parties on the left.

Roussel, who currently polls at three percent, got the country’s attention when he said that French gastronomy consisted of “good wine, good meat and good cheese”, sparking an outcry across the left which accused him of disrespect towards vegans and of ignoring multiculturalism.

5 Much of its strength comes from WWII – The Soviet collapse in the 1990s hastened the decline of the PCF in French
national politics, but the party proved more resilient locally, a fact many attribute to the movement’s key role in the World War II resistance and postwar social reforms.