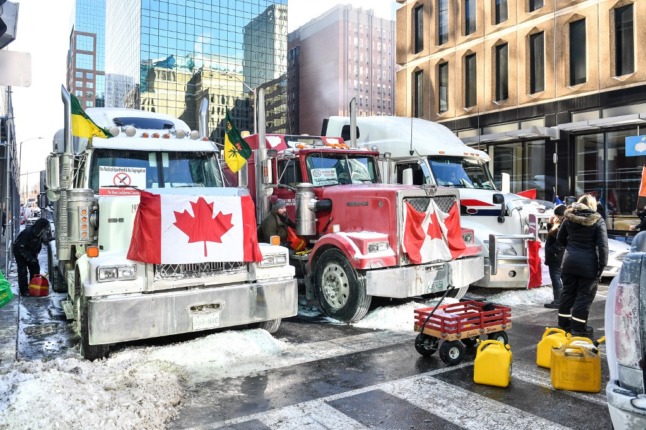 The Convoi de la liberté (freedom convoy) is organised by several groups who are opposed to Covid-related health measures such as vaccine passes and mask mandates.

Other organisers oppose petrol price increases and are concerned about the rise in the cost of living.

The intention is for five convoys to set off from different regions of France, primarily the south-west, south-east and east of France from Wednesday, February 9th, and Thursday, February 10th before converging on Paris on Friday. From there, the convoys will set off for Brussels, aiming to arrive on Monday, February 14th.

Who is organising it?

There isn’t a single organiser, but groups involved include anti-vaccine and anti-health measures groups, as well as the remnants of some of the ‘yellow vest’ protesters and the hardline catholic group Civitas. No unions are involved.

How big will is be?

Protests in Canada have caused massive disruption, even blocking the border with the US, but at this stage it looks like the French event will be a lot smaller.

Organisers are quoting figures of 290,000 people, but that’s just the number of members of the Facebook page advertising the event, and as we saw during the ‘yellow vest’ protests – which were also largely organised on Facebook in the early days – the number of people who actually turn up to demos is usually a lot smaller.

Recent protests against the vaccine pass and other health measures, some of which were organised by ‘yellow vest’ groups, have been attracting only small numbers.

In Canada much of the disruption has come from lorry drivers getting involved and blocking roads with their vehicles.

In France none of the haulage unions have supported the protests and there’s another issue – in Canada many truckers are freelancers and own their own vehicles while in France the majority of lorry drivers are employees so don’t own the lorry.

“So to get a vehicle that doesn’t belong to you, on a weekend, to use it for an obviously illegal action, that can get you into trouble,” security consultant Guillaume Farde told BFM TV. “It will probably not be truckers, but other people coming with their own vehicle, so it’s harder for the intelligence services to anticipate.”

What type of actions will be involved?

A popular protest method in France is an Opération Escargot or a rolling roadblock where a group of lorry drivers spread out and drive very slowly alone main roads, causing huge tailbacks. However this depends on having enough vehicles to operate the block.

Are the police worried?

Police on Thursday said they would ban vehicles of the freedom convoy from entering Paris.

Those caught blocking roads in the French capital as part of an unauthorised protest could be sanctioned with up to two years in prison, a €4,500 fine and a driving ban or deducted points from their license.

An internal briefing from the intelligence service that was leaked to French media earlier in the week says that the movement appears to be “far from solidly structured” but will nonetheless be monitored closely.

Interior Minister Gérald Darmanin told BFM TV that there is “no information that tells us that this is being organised in proportions that would be significant”.