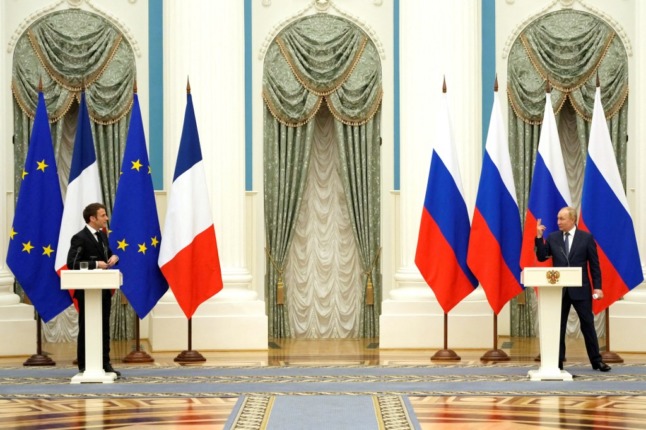 How is President Emmanuel Macron doing in his attempts to prevent the most dangerous war in Europe since World War II? That depends whom you listen to.

Macron was either “mauled  by a bear” on Monday (POLITICO) or won promises from the Russian President Vladimir Putin that could “de-escalate the Ukraine crisis” (Financial Times).

The second – more positive version – was given on Tuesday morning by Macron himself talking to journalists on the presidential plane flying  to Kiev.

“I obtained a commitment that there would no worsening or escalation of the situation,” he said.

I watched (from Paris) the whole of the hour-long Kremlin press conference that followed six hours of talking and eating by the two presidents on Monday. The confusion in the media is understandable.

There were quotes and sound-bites that suggest Putin is ready to play along with Macron’s attempts to defuse the immediate crisis. “I think it’s entirely likely,” Putin said “that some of (Macron’s) ideas and suggestions, even if it’s probably too early to talk about them, could become part of the basis for our next joint steps.”

There were also long passages in which Putin was at his belligerent, mendacious and mocking worst – accusing Ukraine and Nato of menacing poor, peace-loving, little Russia or quoting from a nasty Russian song about necrophiliac rape.

Macron’s officials said afterwards that Putin had promised that he would take no new “military initiatives” and that he would withdraw 30,000  troops from Belarus after the completion of current “exercises”. Neither of those things were mentioned in the press conference.

Much of the coverage in the English-speaking media of the French president’s self-appointed  peace mission seems to fall into two camps – not so much Pro-Putin or Anti-Putin as Pro and Anti-Macron. Either that or there is no coverage at all.

BBC Radio Four did not mention the Putin-Macron talks this morning. The (London) Times led on Boris Johnson promising not to “flinch” on Ukraine.

Social media coverage of the event yesterday was dominated by mockery. Putin and Macron were pictured absurdly at the opposite ends of an elegant, white table as long as a tennis court. The Russians said this was for “health reasons”. Social media decided that it was a deliberate Putin joke. (Someone managed to animate the picture to make the two leaders looks as if they were on a see-saw.)

Should we take Macron’s efforts to prevent a Russia-Ukraine war seriously? Is he, as Macron-haters suggest, simply seeking ephemeral personal or electoral gain? Is he undermining the solidarity of the West by even looking for ways to pacify Vladimir Putin?

Some of the coverage in the English-speaking media has been misleading. This is no spur-of-the-moment, go-it-alone mission. Before leaving for Moscow, Macron spoke to President Joe Biden (twice), to Boris Johnson, the German Chancellor Olaf Scholz and the leaders of most of the European nations with Russian frontiers.

He will be speaking at length to the Ukrainian president, Volodymyr Zelensky, on Tuesday. Some of the Anglo-Saxon coverage of last night’s press conference complained that Macron did not push back against Putin’s mendacious and one-sided presentation of the origins of the crisis.

This is not so. Macron went out of his way to praise the Ukrainian president’s “sang froid” and good sense. He pointed out that having 130,000 Russian soldiers massed on the frontier would make any country “nervous”.

He defended the West’s rejection of Putin’s maximalist demand that Ukraine should be permanently excluded from Nato. He also dismissed Putin’s demand that the admission of former Soviet satellites into the western alliance more than two decades ago should, in effect, be reversed.

So what is there left to talk about? Lots of complex stuff which I won’t go into in detail. But Macron’s peace mission seems to have three main objectives.

One, to defuse the immediate tension and prevent a war, either deliberate or accidental. It remains to be seen whether Putin’s promises on troop movements yesterday are a step in that direction.

Two, to relaunch talks on a more permanent settlement of the dispute about the eastern parts of Ukraine – mostly Donbass – which are controlled by pro-Russian local forces and de facto by Russia. The Russian-Ukrainian-German-French forum for these talks, invented on the D-Day beaches in June 2014, has been revived in recent days at Macron’s urging (and with US blessing). But Putin – bad sign? – seems to have refused yesterday to agree to attend a  leaders’ summit in this so-called ‘Normandy Format’.

Three, to engage Moscow  in a long – preferably very long – process of negotiation on new security arrangements for the whole of Europe. This would not abolish Nato but try to lever Putin away from his Cold War obsession with it.

How this would work is unclear; maybe it cannot work. It would, in Macron’s view, mean a bigger European Union involvement in security matters. This makes some in Washington and London and eastern Europe suspicious of Macron’s motives.

Fair enough. But the Ukraine crisis has also exposed the contradictions and absurdities of the present security situation. Parts of media and political opinion in the US and Britain appear to be baying for a show-down with Russia but will make no commitment to a military intervention to help Ukraine.

As the former French ambassador to the UN and to Washington, Gérard Araud, said yesterday there are a lot of anti-Russian people out there who are ready to “fight until the last Ukrainian”.

Is Macron also exploiting the crisis for his own advantage?

There is no doubt that a successful peace mission would help him in the April election. There may not be too much downside if he is seen to have tried and failed. But Macron’s actions would have been no different if the French election was two years, rather than two months, away.

I think that we should all wish him well. Better the fog of peace (talks) than the fog of war.