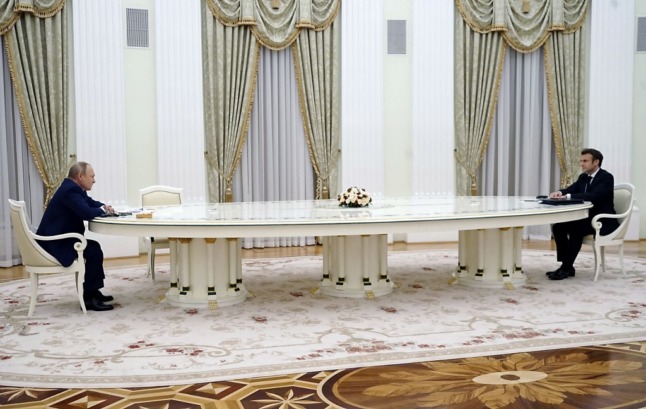 After taking a Covid test, Macron met Putin in Moscow and after a brief public greeting in English, the two men held private talks that went on for more than five hours.

At a later press briefing, Putin joked “President Macron has been talking to me for nearly six hours, almost torturing me,” but added that the talks had “possible proposals for compromise”, saying that he wanted to avoid a war.

The two had a seven-course dinner during their talks.

Macron on Tuesday heads to Ukraine for talks with president Volodymyr Zelensky, as 125,000 Russian soldiers gather on the Ukrainian border.

Macron’s visits come during a week of intense Western diplomacy amid a major Russian military buildup on its southwestern frontier that has raised fears it could soon march into Ukraine.

Putin said several proposals put forward by Macron at talks on Monday could form a basis for moving forward on the crisis over Ukraine.

“A number of his ideas, proposals… are possible as a basis for further steps,” Putin said after more than five hours of talks in the Kremlin.

He did not provide any details but said the two leaders would speak by phone after Macron meets with Zelensky.

The French president said he had made proposals of “concrete security guarantees” to Putin.

“President Putin assured me of his readiness to engage in this sense and his desire to maintain stability and the territorial integrity of Ukraine,” Macron said.

The French presidency said the proposals include an engagement from both sides not to take any new military action, the launching of a new strategic dialogue and efforts to revive the peace process in Kyiv’s conflict with Moscow-backed separatists in eastern Ukraine.

With tensions soaring between Moscow and Ukraine and its allies, Macron was the first top Western leader to meet Putin since the crisis began in December.

Putin denied that Russia was acting aggressively towards Ukraine or the West, saying “it is not us who are moving towards NATO’s borders”.

If Ukraine joins the Western military bloc, Russia could get sucked into a conflict with European countries, he added.

“Do you want France to go to war with Russia?” Putin said.

Ukraine, a former Soviet republic that gained independence in 1991, has expressed a desire for closer ties with the West and membership of the NATO military alliance that sought to contain Moscow and its Communist allies during the Cold War.

Putin has complained that NATO’s eastward expansion following the end of the Cold War has undermined Russia’s security.

The Russian leader said Ukrainian authorities were to blame for the continued conflict in the country’s east, home to pro-Russian breakaway enclaves which have previously seen fierce fighting between separatists and Ukrainian forces.

In Washington, US President Joe Biden warned Putin that he would “end” the controversial new Nord Stream 2 gas pipeline from Russia to Europe if Moscow sends forces across the Ukrainian border as it did during the 2014 annexation of Crimea.

“If Russia invades – that means tanks or troops crossing the border of Ukraine, again – then there will be no longer a Nord Stream 2,” Biden told a joint White House news conference with Scholz on Monday.

Biden’s declaration was the bluntest so far on the fate of the massive pipeline, which is complete but has yet to begin funnelling natural gas to Germany, tying energy-hungry Europe ever closer to Russia.

German Chancellor Olaf Scholz, visiting Biden, was less direct and said only that Berlin was “united” with Washington, but declined to mention the pipeline by name.

Scholz himself will be in Moscow and Kyiv next week for talks with Putin and Zelensky.

US officials say Moscow has assembled 110,000 troops near the border with Ukraine and is on track to amass a large enough force — some 150,000 soldiers — for a full-scale invasion by mid-February.

Russia insists it has no plans to attack and has instead put forward its own demands for security guarantees.