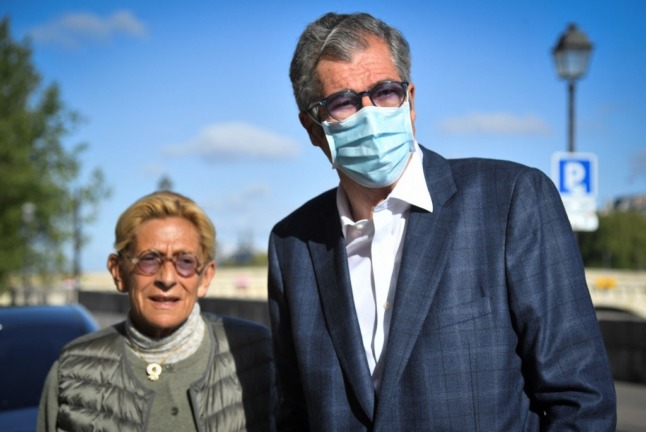 Isabelle and Patrick Balkany, a power couple formerly in charge of the Paris suburb of Levallois-Perret, could be sent back to prison. (Photo by Bertrand GUAY / AFP)

Patrick Balkany, 73, the former mayor of the wealthy Paris suburb of Levallois-Perret has been caught up in scandals since the late 1990s. Despite that, he and his wife, Isabelle, ran the commune for almost two decades.

In 2019, they were both handed prison sentences for financial fraud, accused of money laundering and hiding assets worth €13 million from the taxman from 2007 to 2014.

Patrick faced 8 years in prison while Isabelle faced 7 years, although her sentence was suspended on health and compassionate grounds.

After the 2019 conviction, Patrick Balkany was jailed, but was released on health grounds after serving less than six months.

As a condition of serving their sentences in the community, both were ordered to wear electronic bracelets allowing the authorities to track their movements, remain at their home in Giverny and visit probation services when summoned.

The couple, who are now in their early 70s, were ordered to remove their electronic bracelets by a court on Thursday after breaking the terms of their release.

On Monday, the court officially revoked the electronic bracelet and ordered Patrick Balkany to return to jail. His wife remains in hospital after reportedly attempting suicide.

Their lawyer told BFMTV that there had been about 100 alerts triggered by the bracelets, after Patrick and Isabelle failed to remain in close proximity to their home.

“It comes from the fact that they live in a big property. When they go to the gate to collect a letter, it is triggered. When they chase their dogs which are running away, it is triggered. They have acted in total good faith. We can see that none of these alerts last longer than 30 seconds,” he said.

But a tribunal has also argued that the couple had failed to respect summons by the probation authorities since their release.

Dominique Puechmaille, the prosecutor in charge of the case, told RTL that on top of all this, the couple had shown a “lack of effort” to pay back more than €5.3 million still owed to the state despite their comfortable revenue.

“These are people condemned for serious financial fraud. They have exhausted all recourse and alternative arrangements. They must face their punishment,” she said.

“When you play with fire, eventually you get burned.”

Isabelle Balkany’s lawyers released a communiqué saying that Isabelle should not return to Prison.

“Aged 75 and in a degraded physical and psychological state, Isabelle Balkany has already lost everything over the course of these criminal proceedings that have lasted nearly ten years,” they wrote.