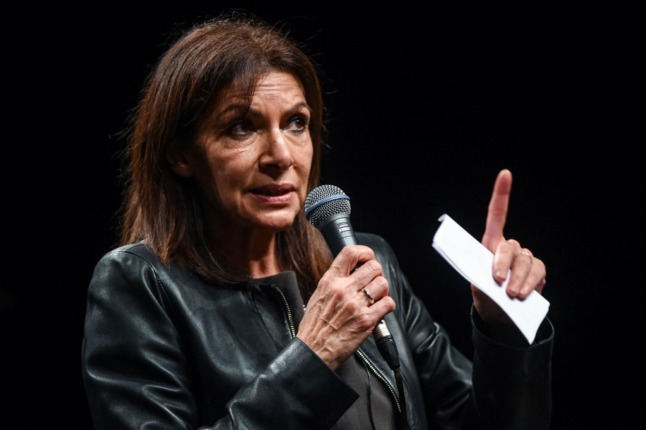 French Mayor of Paris and Socialist Party (PS) candidate for the 2022 presidential election, Anne Hidalgo, delivers a speech. She insists that she is "in tune" with French voters. (Photo by JEAN-FRANCOIS MONIER / AFP)

Lagging in the polls and struggling to make an impact barely two months before France’s presidential election, Socialist candidate Anne Hidalgo believes her time will come in the campaign.

“The real issues are household budgets, quality of life, and people’s worries about the future of their children, and I think I’m in tune with those expectations,” she told AFP in an interview on Tuesday.

The 62-year-old mayor of Paris has so far failed to make her voice heard during a campaign dominated by  debate on immigration, identity and security, driven by the far-right and conservatives.

“It’s true that you’re heard in television studios when you make outrageous statements about foreigners or French identity, but it’s not because you get clicks and likes with hateful speeches that this is what the larger population wants,” Hidalgo said.

The campaign, notable for the emergence of anti-Islam TV pundit Eric Zemmour, has left her and others wondering “how the country ended up here, with this media show that makes you want to be sick?” she said.

The mother-of-three has refused to engage in personal attacks, remains focused on social spending and the environment, and has steered clear of engaging with Zemmour — unlike her hard-left rival Jean-Luc Melenchon.

But the tactic has often left her appearing to be on the sidelines looking in, lacking political punch.

Portugal’s Socialists may have won elections last week and Germany’s left-wing Social Democrats have regained power, but there is so far little sign of the Socialists in France ousting centrist President Emmanuel Macron.

The latest survey on Monday suggested Hidalgo would win just 3.5 percent in the first round of the election on April 10.

Such a result would be another catastrophe for her party, which has been one of the dominant forces of post-war politics in France.

Does she feel the pressure, given that a final score of under 5.0 percent could spell financial disaster for the Socialists because her campaign spending would not be refunded by the state?

“Not on my own. And this shared destiny is something that carries you too,” she says. “When the left has been in power, it has enabled all the major social advances.”

Recent developments have given her camp little reason to feel they are any closer to recapturing past glories.

The left-wing field of candidates was already crowded, but Hidalgo’s weakness has led a fifth person to enter the fray, former Socialist justice minister Christiane Taubira, who launched her bid in January.

Hopes of a common left candidate were dealt perhaps a final blow at the weekend when a “people’s primary”, an online vote by nearly 400,000 left-wing supporters, endorsed Taubira.

But all her rivals rejected the result, including Hidalgo who trailed in fifth place.

Explanations for the demise of the French Socialist party as a national political force are numerous and varied.

Many point the finger at ex-president Francois Hollande whose five-year term from 2012-2017 ended in calamity when he decided not to run for a second term after a series of gaffes and catastrophic polling figures.

“I say to people ‘we’ve learned from our errors, you have to recognise that’,” Hidalgo added.

“There’s a new generation around me which is starting out in national politics with this campaign.”

The Andalucia-born daughter of Spanish immigrants admits she was initially reluctant to stand, having just won a second term as Paris mayor in 2020 and ahead of the Paris Olympics in 2024.

She credits Portuguese Prime Minister Antonio Costa for talking her round.

“He said to me… ‘You have to be the one that reawakens the Socialist, Social Democrat family in France,'” she said.

“I thought that I wouldn’t be able to look at myself if our country missed another opportunity to address its transition to a green economy and the question of inequalities.”