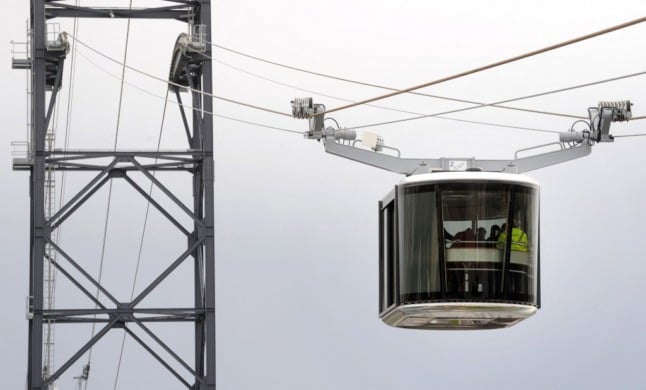 The France's first urban cable car was inaugurated in Brest in 2016. The Val-de-Marne département outside of Paris is set to acquire one of its own. (Photo by FRED TANNEAU / AFP)

Work on the line, which will connect the southern Parisian suburbs of Créteil and Villeneuve-Saint-Georges, is set to begin in March.

Known as Câble 1, this project will cover 5 stations and is aimed at providing “a concrete answer to the daily transport difficulties of residents of these Val-de-Marne communes,” according to Ile-de-France Mobilités (IDFM)- the regional public transport authority. A map shows the planned route of a cable car service in the Val-de-Marne département outside of Paris. Source: IDFM

Each cabin will contain space for ten people sitting down and will be carried dozens of meters in the air above the streets below. In total, the line will run 4.5km – a distance it will cover in just 17 minutes. It is unlikely that anyone will be able to use the line until 2025.

IDFM said that the project, which is set to cost €132 million, will represent an “attractive and innovative mode of public transport,” for some 20,000 local residents.

In an interview with Le Parisien IDFM director, Laurent Probst, said that the service would have a capacity of up to 1,600 passengers per hour.

A legal challenge that claimed the cable cars would pass too close to people’s homes and infringe on their right to privacy, is set to be thrown out of court.

The design plans have been revised to ensure that the cabines would pass higher above houses and to increase the distance of the stations to houses. Floors of the cabins will be opaque, meaning passengers can’t look directly down at residents below.

Below is the provisional construction schedule according to IDFM.

IDFM say that a dozen other cable car projects are currently under consideration.