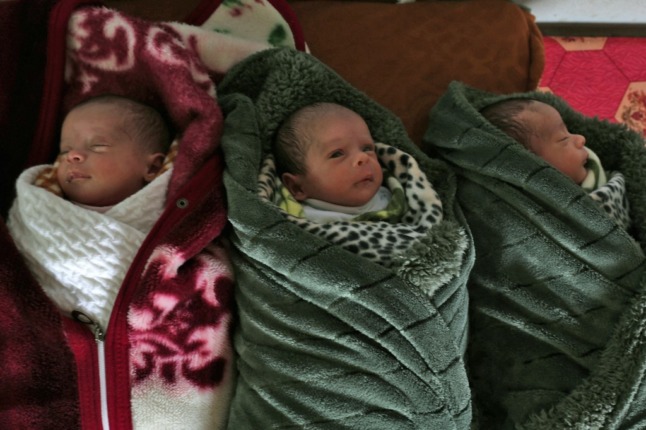 Many European countries distribute baby-boxes – packages full of baby essentials – to the parents of newborns.

The idea was conceived in Finland in 1938 – mothers would be sent a box in the post prior to their due date. Inside were things like blankets, bathing products, baby clothes and nappies. Once the goods are removed, the box could be used as a crib. The scheme greatly reduced infant mortality.

France is set to launch its own version of the baby box, or bébé box (plural bébés box), in February 2022. Confusingly though, it is not a box at all, but rather a bunch of good wrapped in a sling. And it will not be delivered to mothers prior to giving birth, but rather handed out to new parents in maternity wards after the baby is born.

Initially, this scheme will be rolled out for parents in poorer areas of the country (zones prioritaires) and neglected rural areas (zones de revitalisation rurale). It will eventually be rolled out nationwide at the cost of tens of millions of euros per year.

So what will parents actually receive?

Various media reports have provided hints as to what will be included in the French bébé-box.

In October last year the Children’s Minister, Adrien Taquet, told the Huffington Post that a special sleeping bag for babies, known as a turbulette, would be included.

“There is less risk for a baby sleeping in a turbulette than in something that could cover their face. And they should sleep on their back,” he said.

Parents will also receive a bib, soap and a booklet containing tips on how to care for their child during the first 1,000 days.

“We want to include an object specifically for the mother to allow her to tell herself that she should take care of herself too – maybe a cream or something like that,” said Taquet back in October.

This measure was widely mocked on social media as being insufficient in meeting the needs of mothers who have just given birth – particularly those suffering with postnatal depression.

The Huffington Post initially reported that the box contain a children’s book. Other media outlets have reported that a musical album may be offered instead. This, according to government sources cited in reports, is to encourage the “artistic and musical awakening” of the newborn – a “fundamental” step for brain development.